Syrian rebels continue to make significant inroads in the country’s south as the Syrian government focuses on key battles in Damascus. 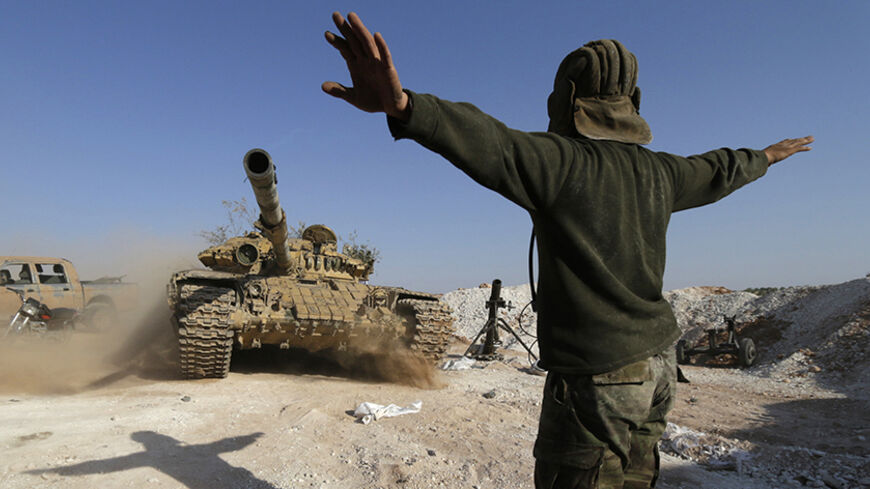 A Free Syrian Army (FSA) fighter gestures toward fellow fighters operating a tank during what the FSA said was an offensive to take control of al-Zaalana checkpoint in Wadi al-Deif military camp, which remains under government control, in the southern Idlib countryside, July 9, 2014. - REUTERS/Khalil Ashawi
Khaled Atallah
October 15, 2014

DARAA, Syria — Syrian rebels launched a series of battles in southern Syria to open the route between Daraa and Quneitra and gain access to Damascus and its besieged western countryside.

The clashes took place at the end of September and beginning of October, and included the Sept. 27 al-Waad-al-Haq battle that resulted in rebels seizing Quneitra, and the Oct. 4 Daraa offensive that fighters announced on the first day of the Eid al-Adha festival in the northwest Daraa countryside. The rebels took control of al-Harra and its strategic Tel al-Harra hill.

Upon leaving Damascus, one feels as if one has gone from one country to another. Most of the villages and towns on both sides of the southbound international highway have witnessed fierce battles, whose effects are still obvious. The passengers on the road, which is controlled by the Syrian army, are at risk of becoming targets for regime snipers as they enter opposition-controlled areas in the countryside of Daraa.

To reach the western countryside of Daraa, several checkpoints have to be crossed, including those of the National Defense Forces, the Syrian army, rebel fighters and Jabhat al-Nusra. The sounds of shelling and explosions increase as you get closer.

Bashar al-Assad's forces have left their positions in the vicinity of al-Harra, northwest of Daraa, and in Tal al-Harra farther north following fierce battles with the rebels, according to opposition journalist Mohammed al-Zubi. He told Al-Monitor, “The battles lasted 36 hours and resulted in many of the regime forces being killed. Moreover, the rebels were able to seize a variety of weapons and ammunition.”

He said that the areas "surrounding the hill were heavily shelled during the battle and a Syrian army unit stationed at the last point did not surrender. They resisted to the end. This was the most difficult task that the rebels have faced. It is as if the Assad regime gave the army strict commands not to lose this very important area."

These developments came as the Syrian official news agency, SANA, declared Oct. 7 that the army "eliminated a number of terrorists in the town of al-Harra and the northern hill in the countryside of Daraa."

The Syrian army’s attempts to regain control of rebel-seized towns came in the form of skirmishes that resulted in no definitive changes on the ground. The areas remain divided between the two parties. The Syrian army maintains control of the city of Daraa and some villages in its eastern countryside, except for two neighborhoods where local opposition gunmen are present. Rebel fighters, however, control the rest of the rural areas of the province.

Retired Gen. Hafez Nabil noted that the regime’s control over areas in southern Syria is slowly weakening. “The regime lost Quneitra and its countryside weeks ago, and today it is losing its most fortified positions in Daraa. These areas are supposed to be fortified the most as they are the closest to the Israeli border. Yet, the regime is now focusing its defenses of the capital, particularly since it is mobilizing for the upcoming battle in Douma in Eastern Ghouta, where the biggest battle will take place,” he told Al-Monitor.

Nabil noted the importance of the points that the rebels now control, but diminished the importance of the equipment and weapons that the rebels took from the army position on the hill. “The regime will not leave sophisticated devices for its enemies. They can only take advantage of the maps and documents, if [they were even] found, ” he said. “The points where the army is positioned in southern Syria are gradually decreasing and the fortifications vary from one point to another. If the regime loses additional positions, the areas will become a copy of the northern areas on the Turkish border, which are almost out of its control and have become a conduit for foreign jihadists. The regime now fears this chaos in the south, particularly since it exerts its control over the Nasib border crossing with Jordan. Thus, it is more likely that jihadists and gunmen control the entire southern region, including the Druze and Christian majority governorate of Suwayda. This opens the way to scenarios that gunmen have always wished for.”

Tel al-Harra is an important strategic point in the Hauran plains, where dozens of monitoring devices, radars and tracking devices in the region are concentrated. It is the only place that overlooks the armed opposition's route toward the villages in Rif Dimashq, as it is the highest hill in the southern region.

Today, the regime is gradually losing the triangle of territories between Daraa, Quneitra and the Western Ghouta of Damascus, according to Abdul Rahman Qasim, an opposition military analyst. “The opposition’s progress in this region threatens the regime’s presence in southern Damascus. Also, the entry of rebel fighters to areas in the northern countryside of Daraa will let them access the Syrian army’s fortifications in the headquarters of the Ninth Brigade. Moreover, since this area is close to the villages in the southwest of Rif Dimashq, it is easier for the fighters to break the siege on the Western Ghouta,” he told Al-Monitor.

After seizing Tel al-Harra, rebel fighters have continued to expand northward, where they now control the village of Zamreen in the northwest countryside of Daraa. Mohammed Daraawi, a rebel fighter, told Al-Monitor that “following violent clashes with the regime forces at al-Rubaie checkpoint between the Zamreen and Jaddia village, we were able to liberate the village, as well as the Um al-Awsaj village.” The Syrian air force, he said, “has intensified its raids on al-Harra and the surrounding hills, as well as on the villages and towns in the northwest of Daraa, without any remarkable results, particularly since the fighters have become more experienced in dealing with the airstrikes.”

Tamer Kayal, a journalist specializing in military affairs, spoke to Al-Monitor about the significance of the rebels’ recent gains in the country’s south. “The opposition’s control over Tel al-Harra necessarily implies their control over the villages and towns that the hill overlooks. It also hinders the arrival of backup for the Syrian army in Quneitra.” Control of the hill, he said, makes it easy to control Quneitra and the border with the Golan Heights, and to reach the Western Ghouta in Rif Dimashq. He said, “The hill links Quneitra, Daraa and Rif Dimashq, which means that gunmen have seized control over the triangle they are speaking of.”

Today, rebel fighters are focused on the capital after making their second advance following the battle of Quneitra. However, the Syrian army’s barricades and barracks on the outskirts of the villages and towns in the Western Ghouta will make any attempted offensive on Damascus difficult.

by Murielle KASPRZAK and Joseph SCHMID | AFP | May 26, 2022
END_OF_DOCUMENT_TOKEN_TO_BE_REPLACED