Will the Syrian truce survive?

As Syrian regime forces recaptured Atman, gaining control of almost all of the cities bordering the critical old international Damascus-Daraa road, talks of a truce emerged. 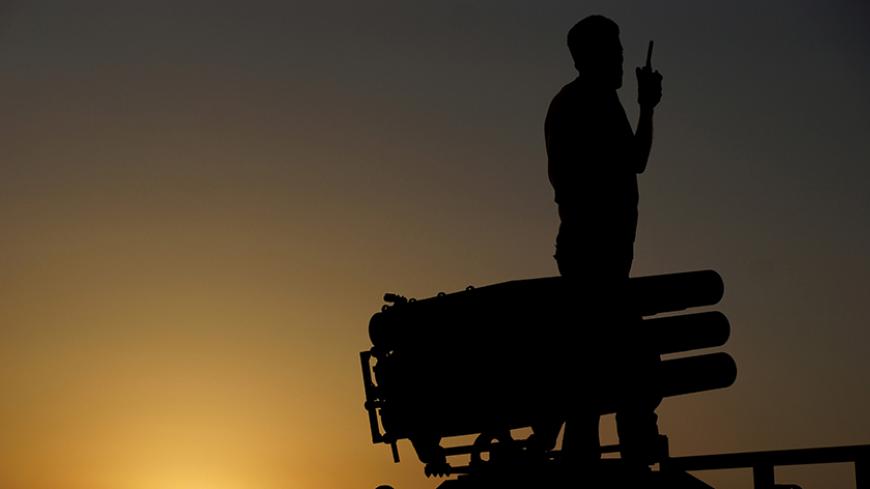 A Free Syrian Army fighter talks on a walkie-talkie near a rocket launcher during what he said was preparations for an operation to strike at forces loyal to Syrian President Bashar al-Assad located in Daraa, July 27, 2015. - REUTERS/Alaa Al-Faqir
Mustafa al-Haj
February 24, 2016

DAMASCUS, Syria — The Syrian regime’s advancement in Daraa, Aleppo and rural Latakia, among other areas, confirms the Russian intervention in Syria has changed the balance of power in favor of the regime.

As opposition forces have failed to deter the regime’s attacks in Daraa province, hopes are hanging on a cease-fire truce announced following a US-Russian agreement approved Feb. 23 by the Syrian regime. The truce, which is to be implemented starting Feb. 27, could be a prelude to ending the military conflict and launching a political solution that would solve the Syrians’ crisis, observers say.

But despite their losses, opposition forces said as late as Feb. 21 that they planned to continue fighting.

On Jan 26, the regime's forces gained control over the town of Sheikh Miskin under heavy cover from Russian aircraft. On Feb. 5, they captured the critical town of Atman on the old Damascus-Daraa international highway. This advancement on two fronts also tightened the regime’s noose on Dael and Abtaa on the international highway. It seemed possible after all for the regime to control the entire international road leading to the Jordanian borders.

On Feb. 16, the opposition, joined by 12 factions, launched the battle of “In odtum odna” ("If you return, we shall return") in response to the regime’s advances in Daraa. The opposition sought control of Tall Qarin in the region connecting Rif Dimashq to Quneitra and Daraa, known as the Death Triangle. It also hoped to disperse the regime's forces and reduce their attempts to target the remaining cities and towns of Daraa.

“The most important goal [of] this battle … is to halt the Russian and Iranian plan to attack the rebel-controlled areas in Quneitra and the Death Triangle," battle coordinator Abu Suleiman al-Ezz said in a Feb. 21 interview with the opposition website All4Syria. "The battle [would ensure] military and security coordination between the southern front factions.”

The factions announced Feb. 21 the end of the first phase of the battle, though they did not succeed in controlling the military points they targeted, namely Tel Ghareeb and Tell Kroum.

Ezz said, however, that the fight would continue until all goals are achieved.

Atman is the last city on the old Damascus-Daraa international highway, which extends 40 square miles. Almost all of Atman's estimated 9,000 civilians have fled since clashes began in neighboring Tafas, Nawa and Abtaa in 2013. Those residents who stood their ground joined the militant factions and the city became a battle front, with regime forces stationed in the city of Daraa.

The Syrian Arab News Agency on Feb. 5 quoted a military source as saying, “Army units, in cooperation with the popular defense groups, restored security and stability to Atman town, 4 kilometers [2.5 miles] north of Daraa city in the southern Daraa province. All the remaining hideouts of the terrorist organizations in the town were eliminated, with many terrorists getting killed, while the rest fled.”

Opposition forces had used Atman as a platform to bomb Daraa neighborhoods controlled by regime forces in the city of Daraa, according to the Syrian Observatory for Human Rights.

A Syrian army source told Al-Monitor on condition of anonymity, “Militants did not expect the army to attack them in the town of Atman before taking control of Abtaa and Dael to the north of Atman, after the fall of Sheikh Miskin. The army was able to control Atman quickly, despite the fortifications erected by the militants in the town for over 2 1/2 years.”

The source added, “When combing the town, the army forces found a large network of tunnels used by militants to avoid air strikes, as well as vehicles and quantities of arms and ammunition.”

Journalist and military affairs expert Tariq al-Hadi talked to Al-Monitor about the strategic importance of Atman, and the regime forces’ advance in Daraa.

“The army has multiple objectives in Daraa now, most notably opening new supply lines to its large military troops deployed in the region, extending from Azraa city in the north all the way to Daraa city in the south," Hadi said. The troops are to advance toward the Jordanian border and take control of the Ramtha border crossing in southern Daraa city, separating the east and west of the province "and expanding the safety circle around Daraa city."

Hadi added, “Atman is the gateway to the city of Daraa."

The battles for control of Atman and Sheikh Miskin have put the cities of Abtaa and Dael — which are also located on the Damascus-Daraa road — between a rock and a hard place. This prompted the cities' notables, who are affiliated with the Baath Party, to send a delegation Feb. 6 to regime-controlled Azraa city to negotiate a truce, according to a civil rights activist in Dael, Abu Rami (a pseudonym).

Abu Rami told Al-Monitor, “The truce stipulates the halt of military operations against the cities of Abtaa and Dael, the provision of services such as communications and electricity in the two cities and the release of some detainees of the cities by the regime in exchange for flying the Syrian flag on government buildings in Abtaa. The truce also required armed militants to turn themselves in with their weapons and settle their situation with the Syrian army.”

He added, “Civilians raised the Syrian flag in the city center on Feb. 8, and military operations were eased between the two parties in Dael and Abtaa, while Russia continued to bombard the rest of the Daraa countryside. Yet the opposition militants in Abtaa brought down and set fire to the flag on the same day, expressing their refusal to surrender to the regime.”

Civilian opposition sources in Busra al-Harir told Al-Monitor on condition of anonymity that the regime on Feb. 8 sent out calls for a conditional truce to more than one city in Daraa, mainly Tafas and Busra al-Harir. The opposition rejected the proposals, the sources said.

Three months of heavy aerial bombardment with missiles and cluster bombs have caused a huge number of people to flee the areas. The local council of the opposition-controlled part of Daraa announced Feb. 14 that Daraa is a stricken city under a state of emergency.

On Feb. 16, the All4Syria website indicated that Daraa province is witnessing a wave of displacement, including 16 towns and cities, as 200,000 displaced people head toward towns that have not been targeted so far.