A string of victories by Syrian rebels in the country’s south has taken the Syrian army by surprise, with the Daraa governorate almost completely in the hands of rebel groups. 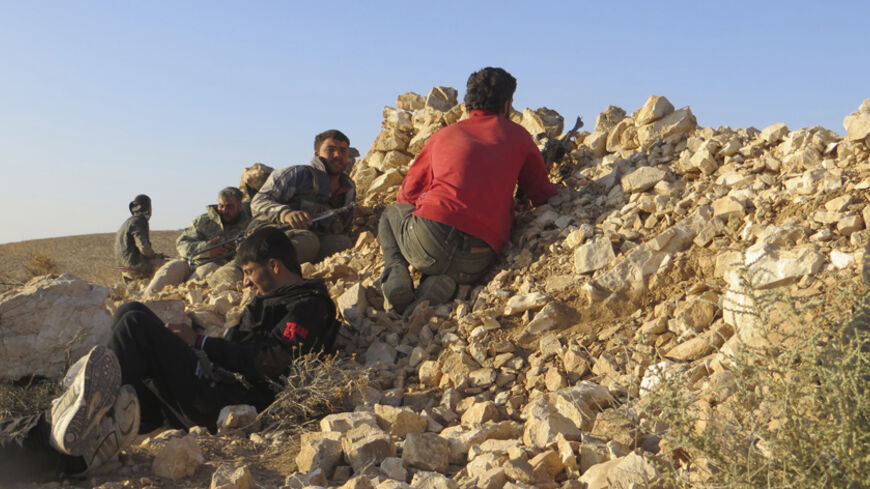 Free Syrian Army fighters take positions in Daraa during what they said was an offensive to liberate checkpoint No. 41, a border point with Jordan, June 14, 2013. - REUTERS/Ali Abu Salah/Shaam News Network
Mustafa al-Haj
November 17, 2014

DAMASCUS, Syria — Syrian rebels declared their control over the city of Nawa in the western countryside of Daraa — 85 kilometers (53 miles) south of Damascus and only 10 kilometers (6.2 miles) from the border with Israel — on Nov. 9, after battles began Nov. 1 against the regime’s forces in the region. The fighting ended with the “liberation” of areas formerly controlled by the Syrian army, taken during the “Demolition of the Wall,” a rebel operation that brought down the army’s first line of defense of the capital against attack from the south.

Rebel fighters were able to break the regime siege of the town of al-Shaykh Maskin, near Daraa, on Nov. 6. They penetrated the town through battles that led to the fall of Brigade 82, one of the Syrian army’s largest military bases. Rebels then broke into the town and opened the road between al-Shaykh Maskin and the city of Nawa on Nov. 6. This was how rebel fighters were able to cut the supply routes of the Syrian army and lay siege to its positions, which accelerated their total control over the area.

A military source in the Syrian army, who spoke on condition of anonymity, told Al-Monitor, “The army's control over the past few months was limited to the roads leading to the region through agricultural and rugged areas, while militants controlled the main roads to these villages.” The source said, “The areas controlled by the Syrian army and the opposition-controlled regions overlap, which explains the ongoing confrontations on the frontlines there. The fall of these regions had a negative impact on the old road between Damascus and Daraa as militants took full control of Nawa, al-Shaykh Maskin and Brigade 112, to put pressure on the main road and cut off supplies to the Syrian army in Daraa.”

The source said, “Militants have an additional goal beyond controlling these villages, which is to relieve the pressure on the town of Atman, located at the eastern entrance of Daraa, [which has been under] siege by the army for months now.” According to the source, the loss of the battle in the region was a surprise to the Syrian army in the south and the results were disappointing since they paved the way for the militants to extend full control over the governorate of Daraa.

Official news outlets did not comment much on the domino-like fall of the towns in Daraa to Syrian rebels. The official news agency, SANA, quoted by Al-Watan newspaper on Nov. 9 reported that army units carried out a redeployment and repositioning maneuver in Nawa in line with the nature of the anticipated combat actions, while other army units killed a number of terrorists in west Tal al-Khoder, al-Shaykh Maskin, Dael, Abtaa and Tafas.

The southern front is the most dangerous for Damascus. Through all the battles to the south of the capital and to the east toward Ghouta, the regime aims to protect Damascus as its center of power and to confirm its continued control of the Syrian central state. Without Damascus, the regime is little more than another armed faction on the ground in terms of power and influence. Therefore, rebel control of the southern region may be a way to pressure the Syrian regime, which is currently preoccupied with scoring military victories in the north and in eastern Ghouta.

Commenting on the recent events in Daraa, opposition political analyst Ali Kamel told Al-Monitor, “Although opposition fighters achieved important victories in the south on the military levels, these victories are no less important on the political level, particularly at a time when the concept of moderate opposition is gradually diminishing on the ground, especially in the north.”

Kamel said the success of the Syrian armed opposition in the south might “perhaps meet the conditions of a moderate opposition according to the international community’s standards.” He added, “The objective conditions in Daraa differ from those in the north, as the militant factions under the banner of the Free Syrian Army (FSA) in Daraa have a larger presence than in Idlib, in light of the absence of the spread of Islamic State (IS).”

On Nov. 15, clashes between rebels and the Syrian army moved from inside al-Shaykh Maskin and Nawa to their peripheries. On Nov. 14, rebels destroyed an army Fozdeka combat vehicle using a Russian-made Fagot missile targeted at the outskirts of Brigade 82.

The opposition media office in Nawa stated on its Facebook page that 25% of the homes of the city are no longer habitable and called on “revolutionary bodies working in the field of human rights” to secure housing and shelter for hundreds of displaced families that returned to the city and found themselves homeless.

The Syrian Observatory for Human Rights said on Nov. 15, “Syrian air force fighter planes dropped explosive barrels in the vicinity of the villages of al-Dalli, al-Sihailiah and Burqa in the countryside of Daraa, with no casualties reported. Warplanes also launched four air raids over the town of Deir al-Adas with no information concerning casualties yet. A field commander in an Islamist brigade and a fighter from the Islamic battalions were killed in clashes with regime forces in al-Shaykh Maskin.”

Despite suffering setbacks in the north, Syrian rebels in the south are trying to present a model of a moderate opposition capable of achieving field victories, far from the Islamist character that has so far marked most rebel factions. Jabhat al-Nusra has a limited presence in the south and the military structure of the opposition’s joint command in Daraa was restructured to include a civilian administrative structure. This might encourage Western powers and their regional allies to support rebels in the south as a means to exert pressure on the Assad regime in Damascus.