The opposition forces in southern Syria say that the regime, which has launched a battle with its allies Hezbollah and the Islamic Revolutionary Guard Corps, is not advancing there. 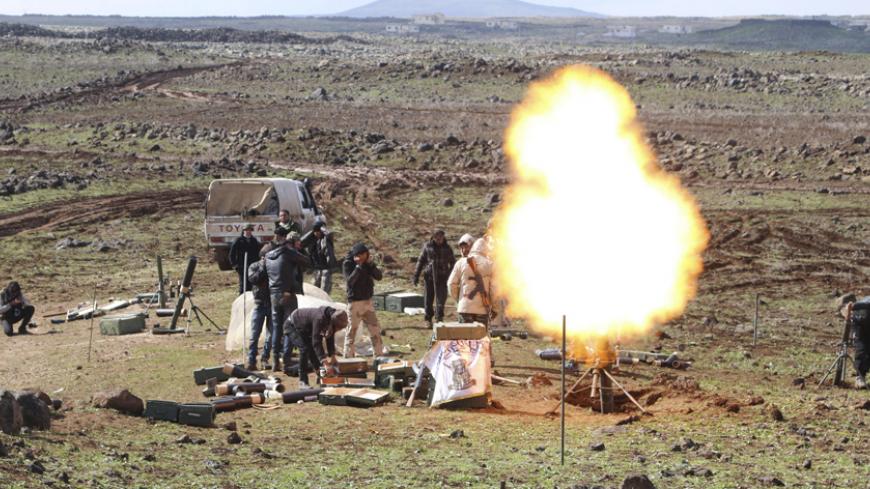 Rebel fighters fire mortar at forces loyal to Syria's President Bashar al-Assad that are stationed in the villages of Tel Merhi and Deir Adass, from the northwestern countryside of Daraa, Feb. 18, 2015. - REUTERS/Wsam Almokdad
Mustafa al-Haj
February 20, 2015

DAMASCUS — The Syrian regime started a wide-scale battle on Feb. 8 that it dubbed "the battle for a settlement,” in the countryside of Daraa (80 kilometers, or 50 miles, south of Damascus), with heavy participation from Lebanon’s Hezbollah and Iran's Islamic Revolutionary Guard Corps (IRGC). Observers believe that it is the most important battle yet at the military and political levels. It comes a day after the opposition fighters launched “the breaking claws” battle in Daraa. The fighters targeted the regime forces' positions in the northern countryside of Daraa, in response to the massacres committed by these same forces in eastern Rif Dimashq on Jan. 23.

The military objectives of the battle aimed to extend the regime’s control over the towns located in a strategic geographic triangle linking the northern countryside of Daraa, the northeastern countryside of Quneitra and southwestern Rif Dimashq. It is an attempt to separate these cities from each other, to prevent the infiltration of the opposition fighters and to fully secure the capital, Damascus. The battle also aims to pave the way for the regime’s progress toward a stretch of hills leading to the strategic Tal al-Hara in western Daraa, and then to the center of Hauran, the city of Nawa, Sheikh Miskin and Quneitra.

This front is strategic for several reasons. It is the closest to Damascus, and the opposition factions operating there have close ties with Jordanian intelligence, a main party in the MOC Operations Center — Friends of Syria. They also rely on local tribes and the rural community in the area for support. Interestingly, the militant groups there are affiliated with the Free Syrian Army, and the presence of Jabhat al-Nusra is limited compared to its wide spread presence in the north.

Politically, the battle comes at the climax of the US-Iran talks, the Israeli elections and Staffan de Mistura’s visit to Damascus. Therefore, if Iran and Hezbollah succeeded in reaching the Israeli border, Iran would have a new trump card in hand to play against Western countries over the nuclear file.

Forty-eight hours after the start of the battle, government forces, backed by the foreign fighters in question, managed to tighten their control over the village of Deir al-Adas and the surrounding hills in the northwest of the Daraa countryside. The regime has achieved a quantum leap by shifting from defense to offense. The armed forces general command stated on Feb. 11: “The armed forces units carried out a large-scale military operation in the southern area, and made consecutive achievements in several directions in Rif Dimashq, Quneitra and Daraa. They restored security and stability in Deir al-Adas, ad-Danaji and Dayr Makir; tightened their control over Tal Masih, Tal Meri, Tal al-Arous and Tal al-Sarja; and eliminated large numbers of Jabhat al-Nusra terrorists."

The clashes between the opposition fighters on the one hand, and government forces and their allies on the other, decreased with the arrival of a blizzard in Syria and the southern area, particularly on Feb. 12. Syrian aircraft halted their raids due to the weather. In contrast, the unified opposition forces announced a general mobilization in Daraa, and denied losing important positions in the area. They also stressed that what is happening is a battle consisting of attacks and retreats, according to the spokesman of the unified opposition forces, the Southern Front, Issam al-Rayes. Speaking to an opposition channel, he denied the advancement of the regime in Quneitra.

The regime controlled the triangle area in Daraa, Quneitra and Rif Dimashq, which mostly consists of plains and hills behind which there are rough barren lands, making it difficult to be defended. An opposition field commander in Daraa told Al-Monitor on condition of anonymity, “Hezbollah based its attack on a military technique that it has already used in Syria. It is closer to the guerrilla war and resulted in significant casualties among its ranks.” The source added, “In contrast, the rebels used anti-armor weapons, which prevented significant casualties among their ranks.”

According to the source, Hezbollah’s first sudden strike resulted in the killing of no more than 10 opposition fighters. The opposition forces did not suffer any further major losses, unlike the regime forces, Hezbollah and the IRGC, which have suffered human and material losses, particularly since the opposition made effective use of anti-tank weapons.

While both parties continue to mobilize additional troops to reinforce their positions in the northern countryside of Daraa, the leadership of the Southern Front pledged to wage “a guerrilla war,” to counter the attack of the regime’s forces that are backed by Iran and Hezbollah. It noted that it was able “to recover four hills and three towns” so far, which were under the control of the regime forces and their allies since the start of the offensive on Feb. 8. Abu Osama al-Joulani, a senior Southern Front field commander, said in a media statement on Feb. 16, “The battle may drag on, and we will be fighting back and forth.”

He added, “The Southern Front includes armed groups that still have a national dimension and raise the banner of bringing down the regime as a priority. The elimination [of these groups] limits the options of the Syrian people to extremist Islamist organizations, so that the battle becomes a war against terrorism, just as the regime and its allies want it to be.”

The battle for “a settlement” has not settled anything so far. At a time when the regime continues to shell the towns and villages in the countryside of Daraa and Quneitra, where the opposition fighters are entrenched, the opposition announced on Feb. 18, the start of the battle for "the unification of the banner" in the Southern Front, with the participation of eight operation rooms, according to the same source. The battle is designed to liberate the triangle area and prevent the advancement of the regime forces there, according to the military media room of the Southern Forces in Daraa.