Thousands of Syrians were forced to leave their homes in southern Syria, where government forces have escalated the offensive to retake the strategic rebel-held area. 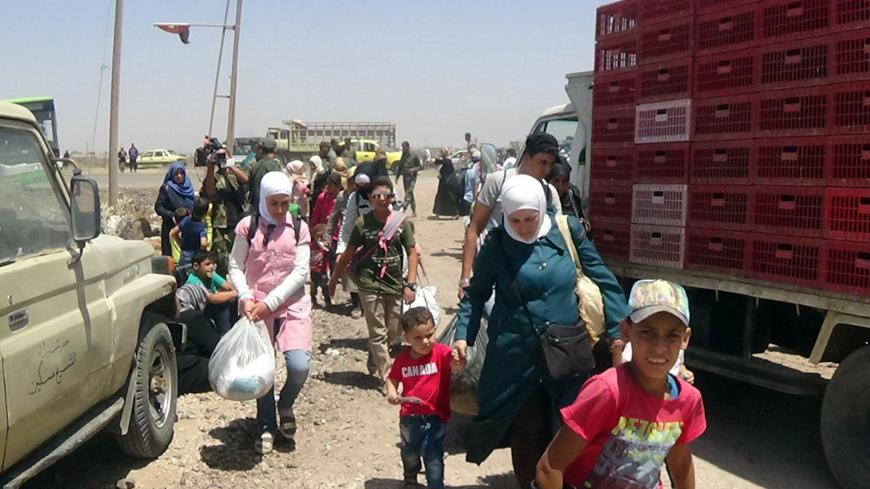 ALEPPO — Battles have been raging since June 15 between the Syrian regime forces and the armed opposition in Lajat in Daraa’s eastern countryside in southwestern Syria. The Syrian regime forces, backed by Iraqi militias and fighters from Lebanese Hezbollah, are trying to gain military control over the area after breaking the de-escalation agreement that was ratified under US-Russian-Jordanian auspices in 2017.

Meanwhile, armed factions deterred several attempts to advance toward Nahta, a town that is facing intense shelling from the regime’s tanks and air force. The Central Operations Room, run by the armed opposition factions, said that its anti-aircraft batteries struck a MiG 23 aircraft June 25 while it was conducting an air raid on Busra al-Harir.

The Syrian regime forces began sending massive military reinforcements to south Syria in mid-May. The US State Department released a statement June 14 saying that it would take “firm and appropriate measures” to respond to the Syrian government’s violations in the de-escalation zone in the southwest.

Meanwhile, on June 22, the EU condemned the regime for its attacks on the opposition-held territories in Daraa province. High Representative of the European Union for Foreign Affairs and Security Policy Federica Mogherini said in a statement, “The current military operations are taking place in the de-escalation zones that the Astana parties vowed to protect.” She added, “The Astana parties are asked to ensure halting the battles in these zones as top priority. We expect them to respect this commitment.”

Russia, Turkey and Iran agreed to set up a de-escalation zone in the opposition-held areas in south Syria during their meetings in the Kazakh capital Astana.

On June 20, the armed factions in south Syria announced the establishment of a Central Operations Room in the south, including the main factions in south Syria, to organize, plan and lead the combat and military acts in that part. The Central Operations Room includes the operations command centers of al-Bonyan al-Marsous, Ras al-Sofouf, Tawhid al-Sofouf, Sad al-Ghouzat, Mouthalath al-Mawt, Sad al-Boughat and Nasr al-Mobin.

Abu Mahmoud al-Horani, spokesperson for Horan Free League, an independent media institution in south Syria, told Al-Monitor, “The general situation in Lajat region in Daraa’s northeastern countryside is dire. The Iraqi militia-backed regime forces are trying to advance daily with the help of the Russian air force. The rebels are showing courage in deterring attacks, but the change in the US stance is stark. The US stated a few days ago that it would respond harshly to any violation of the truce in the south of Syria. Then, it informed the southern factions not to expect any military support to deter the attack.”

Rebel factions claimed that the United States had sent a letter to the armed factions in south Syria stating, “We must clarify our position: We understand that you must make a decision (to fight) based on your interests, the interests of your people and your faction as you see them. You should not base your decision on an assumption or expectation of military intervention from our side.” The letter, which the rebels published online, also stated that the United States is still advising Russia not to launch military action in south Syria.

Horani added, “We read the UN reports about 45,000 displaced fleeing the conflict areas. As field activists, we assert that 75,000 people left Lajat. Daily, we see new people getting ready to leave. We expect the number of displaced to exceed 100,000 if the regime’s escalation continues.” The UN stated June 26 that at least 45,000 people fled Daraa toward the Syrian-Jordanian borders.

Spokesperson for the World Food Program Betina Luescher said in a press statement that she expects the number of displaced to nearly double with the escalating violence. The Syrian Observatory for Human Rights stated June 25 that 28 people were killed, including a woman and her son, six other women, two children and two civil defense officers, in the regime’s air raids on Daraa countryside in the past few days. The observatory noted that four service centers — two hospitals in Harak town and Busra al-Harir and two civil defense centers in Mseika and Busra al-Harir — were put out of service due to the regime shelling.

Lajat citizen Omar al-Zaabi told Al-Monitor, “We lived a calm period during the truce. I am now getting ready to leave with my family. Where to? We do not know. Jordan has closed its borders, and the regime wants to advance and take control no matter what. I would like to ask the international community how much more blood should be spilled for them to disown Assad and face Russia and Iran? Half of the Syrian people are displaced, whether internally or externally. I no longer care about the humanitarian principles Europe and the US call for. They all went down the drain when Russia and the Syrian regime were allowed to kill more Syrians.”

The opposition-held areas in Daraa, Quneitra and Suwayda are among their last strongholds in the area. The Syrian regime is trying hard to recapture these areas and is trampling over the cease-fire agreements with the rebels. If that happens, south Syria would be completely devoid of armed opposition, and the latter’s presence would be limited to north Syria, specifically Idlib and Hama and Aleppo countrysides.