How did opposition fighters in Daraa’s Sanamayn go separate ways?

Twenty-one opposition fighters from the city of Sanamayn have arrived in opposition areas in the Aleppo countryside in line with an agreement concluded between the Assad regime and the opposition under Russian sponsorship. 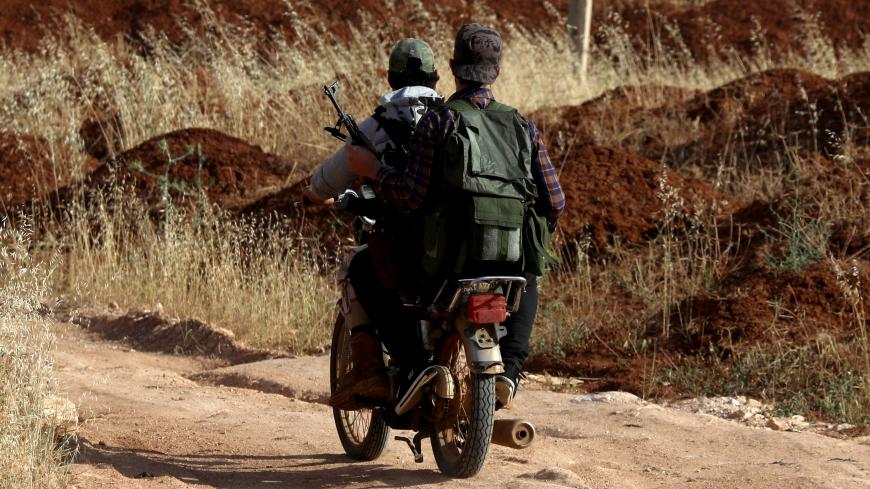 ALEPPO COUNTRYSIDE, Syria — In accordance with a Russian-sponsored agreement concluded with Syrian regime forces, 21 Syrian opposition fighters who were displaced from the city of Sanamayn in the Daraa countryside in southern Syria arrived March 3 in areas controlled by the Turkish-backed National Army, which is affiliated with the Free Syrian Army (FSA) in northwestern Syria.

The Syrian Red Crescent accompanied the fighters up until the Abu al-Zandin crossing point, which connects opposition-held areas to regime-held areas in the northeastern countryside of Aleppo.

The Sanamayn fighters were received at the crossing point by a number of faction leaders and Moral Guidance Department officials from the National Army. While the wounded were transported from the bus to hospitals, the rest were transferred to opposition camps in the Aleppo countryside.

Moral Guidance Department official Osmat al-Absi supervised the reception of the fighters. “The third corps of the National Army received 21 fighters who were displaced from the city of Sanamayn. These include four wounded, one of whom needs surgery. The fighters arriving from Sanamayn were placed in a National Army camp located near Aleppo’s city of al-Bab,” he told Al-Monitor.

“Despite Russia’s sponsorship of the agreement between the Assad regime and the opposition fighters in Sanamayn, there was no coordination between the National Army and the Turkish side in northwestern Syria to receive the fighters. As soon as the agreement was announced, we contacted fighters in the city of Sanamayn and prepared to receive them at the Abu al-Zandin crossing. While these are most welcome to join the ranks of the National Army, they are under no obligation to take up arms again. It is up to them to decide whether or not they would like to join the factions,” Absi added.

The agreement stipulated that opposition fighters who wished to remain in the city of Sanamayn would not be subject to pursuit by the government, nor detained, in exchange for handing their weapons over to the regime forces. Meanwhile, those not wishing to stay in the city were to be transferred to the north. The agreement also gave opposition fighters the option of joining the ranks of the 5th Legion supported by Russia.

Abu Mahmoud al-Horani, the official spokesman for the Horan Free League, told Al-Monitor, “Twenty-one fighters of the city of Sanamayn refused the agreement while about 40 fighters preferred to remain in the city after they received Russian guarantees that they would not be arrested by the government provided they surrender their weapons to the regime forces.”

Horani stressed that the Russian guarantees cannot be trusted because many former fighters in the opposition in southern Syria who concluded a settlement in August 2018 were arrested and killed by the security services of the regime.

Ahmed al-Majarish, a journalist who works with a local network following the developments in southern Syria, told Al-Monitor, “The Russian guarantees are only verbal and promise opposition fighters that the security services will not arrest those who respect the agreement. However, the regime forces will embark on an arrest campaign against defectors and against those who have failed to perform their military service. On a daily basis, we document numerous cases of detentions inside Daraa province to force defectors to fight battles against the opposition in northern Syria.”

Regime forces stormed Sanamayn on March 1, blocked its roads and imposed a curfew there. The forces bombed the western neighborhoods of the city, where the largest number of former FSA fighters were deployed in line with a previous agreement struck in mid-2018.

“The regime forces stormed the city of Sanamayn with armored vehicles and heavy machine guns and shelled it with tank shells, killing four civilians and wounding dozens. This led Russia’s 5th Legion to intervene and resolve the dispute with the participation of the city’s dignitaries,” Majarish added.

Independent journalist Basel Alghazawi, a displaced person from Daraa province who refused to reveal his exact whereabouts for security reasons, told Al-Monitor over the phone that the fighters in Sanamayn had no choice but to accept the agreement, as they only had light individual weapons. He said the regime forces’ raid led to civilian casualties. He said that had it not been for the pressure placed by the former FSA fighters in the western Daraa countryside on the Assad regime and the FSA fighters' capture of 53 regime fighters, the government would not have agreed to enter into negotiations under Russian auspices.

Alghazawi added, “The clashes took place in Sanamayn because the city’s people’s committees, which are affiliated with the regime, are against the continued presence of individuals from the FSA, and this led the committees to ask the regime to carry out a military operation to get rid of the fighters.”