The Syrian regime forces’ 4th Division is trying to storm the city of Tafas in the western countryside of Daraa, in search of wanted persons whom the regime forces call jihadists. 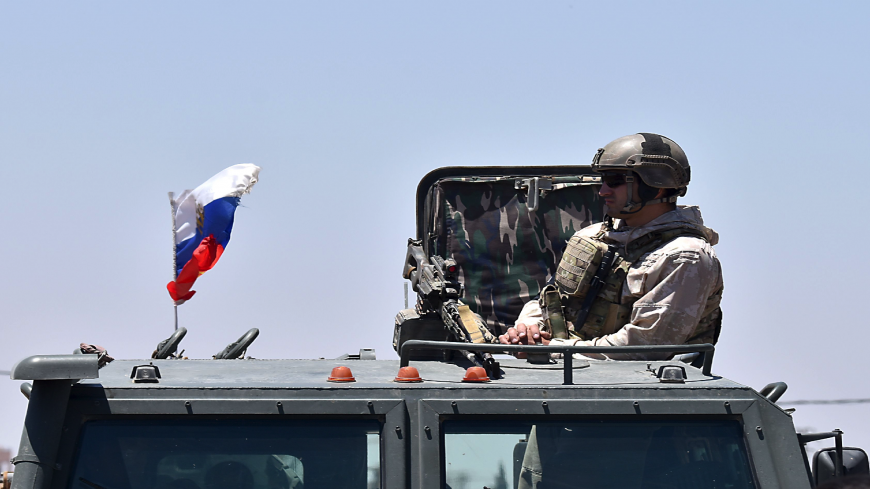 A Russian soldier guards a checkpoint as displaced Syrians from the Daraa province come back to their hometown in Bosra, southwestern Syria, on July 11, 2018. - MOHAMAD YUSUF/AFP via Getty Images

IDLIB, Syria — On Jan. 25, the Syrian Observatory for Human Rights (SOHR) said it had monitored a spike in the death toll resulting from the clashes that took place in Daraa a day earlier, considered the heaviest since the Syrian regime took control of the southern governorate in 2018.

On Jan. 24, clashes broke out between forces of the Syrian regime’s elite 4th Division — affiliated with Maher al-Assad, the brother of Syrian President Bashar al-Assad — and Islamist fighters in western Daraa, resulting in the death of 11 members of the 4th Division.

The clashes erupted after the 4th Division launched an attack against Liwa Fajr al-Islam (Dawn of Islam Brigades) led by Khaldoun al-Zoubi, after the latter refused the 4th Division’s demands to hand over heavy weapons and leave to northern Syria. The 4th Division had set its demands following the bloody events in Tafas on Jan. 13, when violent fighting broke out between the Zoubi clan and the Kiwan clan, resulting in the deaths of four people from both sides. Another person was also killed by stray bullets.

The Central Committee — created in 2018 and made up of former Free Syrian Army (FSA) fighters and local tribal elders — in the western countryside of Daraa met on Jan. 24 with officers from the 4th Division, in the presence of the Security Committee (an operation room affiliated with the regime that includes leaders from the Syrian army and its units, as well as intelligence officers) and the Russian Military Police.

During the negotiations with the Central Committee, the regime demanded the deportation of a number of wanted people to Idlib and the areas under the control of the FSA factions in northern Syria, or else the forces would storm the city of Tafas and arrest the wanted men.

An activist from Tafas told Al-Monitor on condition of anonymity that the regime gave the wanted men a grace period until Jan. 28 to either surrender or leave town.

The source said the wanted men namely include Mohammed Jadallah al-Zoubi, Abu Tariq al-Subaihi, Abu Omar al-Shaghouri, Iyad al-Ghanim, Iyad Jaara, Mohammed Ibrahim and their families, all of whom the regime accuses of being affiliated with jihadist organizations such as the Islamic State or Hurras al-Din.

In this context, journalist Jawad al-Abdullah from Tafas told Al-Monitor, “The Central Committee, which is made up of former leaders of the [opposition] factions, notables in the area and some intellectuals from the countryside of Daraa, is negotiating with the regime forces represented by the 4th Division. There are no FSA-affiliated armed factions in the countryside of Daraa since the settlement agreement in 2018; only a few individuals carrying light and medium weapons [were allowed to stay] in virtue of said agreement, under an understanding with the Russian mediators.”

Abdullah added, “Those who clashed with the regime forces were former revolutionaries from several factions that were previously active in Daraa before the 2018 settlement. The regime is threatening to wage a fierce war, and the Russian side hinted at resorting to the Russian air force. This is a major shift in the Russian position, which was the sponsor of the settlement agreement in 2018.”

Deputy head of the Horan Revolutionary Council Ismat al-Absi, who resides in al-Bab in northern Syria, told Al-Monitor, “The recent developments in Tafas are part of an ongoing series of treachery by the regime as it tries to circumvent prior agreements and wants to secure potentially explosive areas in Horan (in southern Syria) before the upcoming presidential elections. The regime wanted to compensate for its failure in the town of Kanaker (in southern Syria), as it failed to deport or arrest some of the wanted people there. The regime does not adhere to reconciliation agreements and their clause, just as Russia cannot be the executioner and sponsor at the same time. The situation in Horan never calmed down despite the settlement agreement, and jihadist groups are exploiting such crises to find themselves a foothold — and we may witness activities by these groups in the future.”

Absi stressed that negotiations between the Central Committee and the regime have not been fruitful as of yet. Meanwhile, a session that was due to be held on Jan. 27 was delayed until further notice.

In a Jan. 26 report, SOHR noted that a Russian-sponsored agreement in the area would end the tension in Tafas, provided that the heavy weapons of fighters and former faction leaders are handed over. According to sources cited by SOHR, no one would be forced to leave except for one prominent leader — Subaihi, who hails from the town of Atman in western Daraa — and he will be deported to northern Syria and accompanied by former fighters and leaders who wish to go there.

Meanwhile, some journalists and analysts rejected the SOHR report about reaching a settlement agreement in Tafas. Syrian researcher Bassam Jaara tweeted on Jan. 26, “The Central Committee agrees to reject the regime's condition to deport the six opposition members and their families to northern Syria.”

For his part, Brig. Gen. Ahmed Rahhal tweeted on Jan. 26, “In response to the SOHR report regarding the agreement between the South and the regime under Russian auspices: No agreement has been reached, and the decision to reject [the demands] was taken unanimously by the town of Tafas, the western countryside of Daraa and Daraa al-Baladm [represented by] the Central Committee, leaderships, and popular figures. [They] agreed on the principle of: We live together or die together, with the total rejection of Iran’s and Hezbollah's control of the area.”

Reliable independent sources from Tafas told Al-Monitor that a cautious calm has prevailed in the town, awaiting the outcome of negotiations between the Central Committee representing Tafas and the regime forces. The sources said that warplanes believed to be Russian flew over Tafas in an attempt to pressure the Central Committee to accept the regime’s conditions for calm.

Sources in Tafas told Al-Monitor that the regime is still mobilizing members of the 4th Division around Tafas. But, according to the sources, the regime has informed the Central Committee that it will not invade the city if Mohammed Qassem al-Sobhi, one of the men wanted by the regime, remains in his current location. Also, the regime has demanded that medium weapons used as anti-aircraft be handed over and an agreement on settling the situation of the other wanted men is reached. The sources expect the regime forces to enter the city at any moment.