Is war returning to Daraa? 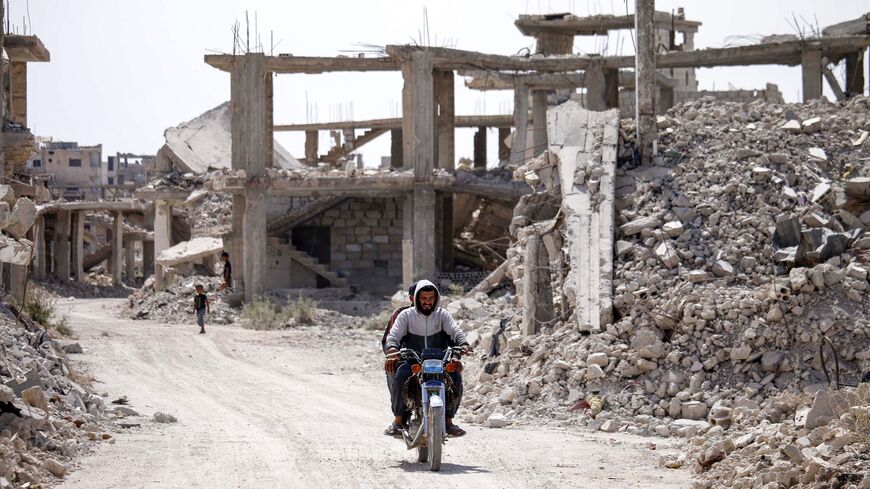 Syrians ride a cycle past destroyed buildings in an opposition-held neighborhood of the southern city of Daraa on Oct. 2, 2018. - MOHAMAD ABAZEED/AFP via Getty Images

Last month, Syrian government forces and allied militias imposed a siege on the Daraa al-Balad area, the old town of the city of Daraa and home to 40,000 people in southern Syria, after rebels refused to hand over their light weapons. The government forces subsequently beefed up their presence on the outskirts of Daraa and forces of the 4th Division mobilized hundreds of members with heavy weapons.

Meanwhile, the Central Committee, a body consisting of notables and media activists and former commanders in the Free Syrian Army (FSA), proposed an offer to the Assad government and said that in the event the proposal is rejected, the committee will engage in war or some other form of confrontation or even depart the area.

On July 28, a meeting was held between the negotiating committee and representatives of the 8th Brigade of the 5th Corps affiliated with Russia, without any government officers attending.

The Horan Free League, an independent media institution in southern Syria, said the committee suggested an offer to the government, whereby only members of the 8th Brigade that hail from Daraa al-Balad would be deployed at three military points in Daraa al-Balad.

The committee said that if the Assad regime rejected the proposal, “We will opt for war” and that the committee would seek the departure of "all the people in Daraa al-Balad, the dam road and the camps" — this would be approximately 50,000 people.

The forces of the 4th Division and the 9th Division, both affiliates of Assad’s forces, tried July 29 to storm some neighborhoods of Daraa al-Balad, but were confronted by opposition fighters.

The Horan Free League said fighters from the town of Saida in eastern Daraa province took control July 29 of the military security detachment, the checkpoint in front of the detachment and the checkpoint near the Saida hospital following clashes with the government forces there. They also captured 25 soldiers.

The people of Saida stormed the Al-Masaken checkpoint and captured all of its members. Local fighters also took control of the Kahil town checkpoint, east of Daraa city, and captured those deployed there, according to the league.

Also, fighters from the eastern countryside of Daraa took control July 28 of seven government checkpoints and military areas in an attempt to relieve the siege imposed by the government on Daraa al-Balad since June 25.

The opposition forces also took control of the military intelligence checkpoint in the town of al-Shajara in the western countryside of Daraa in response to the government's attempts to storm Daraa al-Balad.

Sources from Daraa al-Balad told Al-Monitor that the situation is catastrophic from a humanitarian standpoint as the area is reeling under the brunt of the government siege and is subjected to heavy shelling by the 4th Division.

Dozens of families are suffering from lack of water, medicine and bread, while children are traumatized because of the bombing and the sounds of explosions.

Ali Mahamid, an activist and a Central Committee member from Daraa al-Balad, told Al-Monitor via WhatsApp, “The regime forces are bombing residential neighborhoods in Daraa al-Balad while trying to storm a number of populated neighborhoods. The shelling came from heavy locally improvised projectiles known as elephant rockets, launchers, tanks and cannons. About 40,000 civilians live in Daraa al-Balad, all of whom are vulnerable to a humanitarian catastrophe. There are no medicines, no hospitals and no doctors. The regime insisted on having all individual and light weapons handed over while displacing some people to the north of Syria and erecting nine checkpoints inside the city, provided such checkpoints belong to the 4th Division and not to the 5th Corps, most of whose members belong to the people of Daraa. But all these demands were rejected by the people of Daraa.”

“We called on the regime to provide us with means of transportation in order to move to northern Syria and leave Daraa al-Balad to its forces, but the regime refused. We do not want war. It is the regime that imposed this option, and we are up for it. There are efforts to reach a truce and a subsequent formula for a solution,” he added.

Ismat al-Absi, an FSA leader in Daraa who currently resides in the northern countryside of Aleppo, told Al-Monitor on July 29, “Yesterday, the regime promised calm, but this morning it launched a major military campaign and attacked Daraa al-Balad from three axes. The people of Daraa hit back with light weapons. The regime does not want anyone to oppose it, even peacefully. It does not accept the presence of people who are affiliated with the opposition in Daraa. The regime insisted on having military points inside residential areas. The Central Committee asked it to set up its checkpoints on the outskirts of the city, but it did not accept. The regime insists on setting up checkpoints from the 4th Division, which belongs to its sect, and this creates sensitivity among the residents of Daraa al-Balad. The regime wants to bring militias affiliated with Hezbollah and Iran, which the people of Daraa reject.” The 4th Division is mostly Alawite Muslim, while the people of Daraa are mostly Sunni Muslims.

Daraa’s police chief, Dirar Dandal, accused Daraa’s notables of failing to commit to handing over all medium and light weapons in the city as part of a settlement reached in 2018. Sama TV on July 28 quoted Dandal as saying residents of Daraa al-Balad opened fire at the Karak roundabout and wounded members of the Syrian government forces.

Dandal indicated that there is some disagreement among the notables about what exact course of action should be taken.