As the Russian-brokered Tafas agreement in the western countryside of Daraa between the Syrian regime and the Central Committee enters into force, the regime is now seeking to take over the towns outside its control in southern Syria before the upcoming 2021 presidential elections. 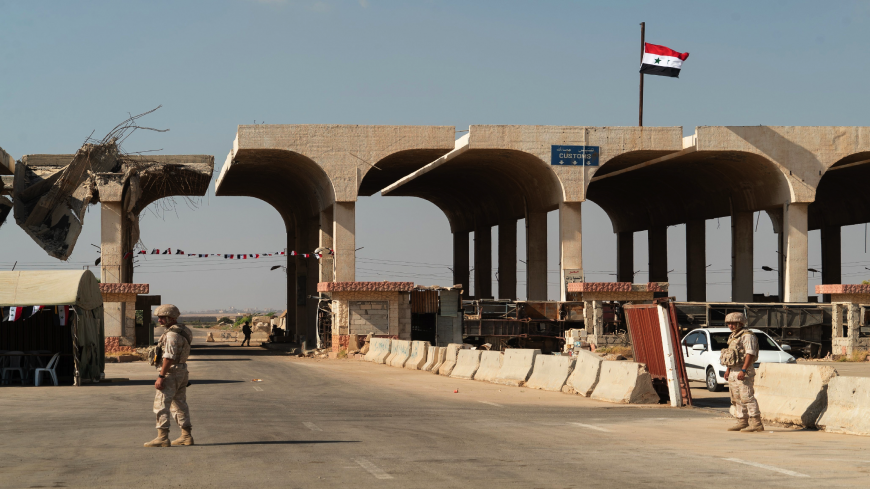 Members of the Russian military police patrol the Nassib border crossing with Jordan in the southern Syrian province of Daraa on Aug. 14, 2018. - ANDREI BORODULIN/AFP via Getty Images

ALEPPO — Syrian government forces entered the town of Tafas in the western countryside of Daraa in southern Syria on Feb. 11, where they toured the National Hospital, the municipality building and some government buildings. They later took up positions in a number of sites inside Tafas.

The regime deployment in Tafas comes in line with a Russian-sponsored agreement signed between the regime and the so-called Central Negotiation Committee on Feb. 8. Under the agreement, former opposition fighters must clear government buildings they had taken up as their headquarters and hand over their weapons. It further provided that Tafas residents wanted by the regime security forces will be allowed to leave Tafas to the eastern countryside of Daraa.

The agreement stopped a regime offensive in Tafas as tensions had been building up in the past weeks between the regime’s 4th Division and opposition fighters.

One day after the agreement was struck, on Feb. 9, regime forces began searching farms in the south of Tafas as set forth by the agreement.

The Central Negotiation Committee in Daraa was established by the Central Military Operations Room (COMP) in the south on July 3, 2018. It is made up of former Free Syrian Army fighters and local tribal elders. The committee is tasked with continuing dialogue and negotiation with Russia, in its capacity as the guarantor of the 2018 settlement agreement reached in southern Syria between the Syrian opposition and the regime. The committee mainly operates in Daraa al-Balad, Tafas and the environs, and the Yarmouk Basin region.

In this context, Amer Ahmad, a journalist in the Daraa countryside who works with the Horan Free League, an independent media institution in southern Syria, told Al-Monitor, “Syrian regime troops [initially] entered the National Hospital in Tafas in the western countryside of Daraa and reached the municipality building located at the entrance to the city, without coordination with the Central Negotiation Committee and the armed [factions] in the town. This prompted the city’s residents to expel them. Then, the regime forces coordinated with the Central Negotiation Committee to allow its 4th Division and 15th Special Forces Division, escorted by Russian military police vehicles, to make a re-entry into the town.”

Ahmed added, “The regime’s military figures accompanied by a number of Russian officers, met with some dignitaries and members of the Central Negotiation Committee in Tafas. The two sides coordinated on facilitating the deployment of the regime forces. The military delegation then toured the town and visited some government buildings.”

According to Ahmed, “The Tafas district department and the police station will be reactivated in line with the recent agreement between the Central Negotiation Committee and the Syrian regime. This agreement aims to defuse tension in the area and delay a military [offensive]. Also, all of the regime's military forces that entered the town will be pulled out after the reactivation of government institutions.”

On Feb. 6, the regime's 4th Division brought reinforcements to its positions around Tafas. The military build-up coincided with the regime’s threat to storm Tafas, which has witnessed ongoing tensions during the past three weeks.

The 4th Division had made a list of six wanted rebels and demanded they be handed over to it or deported to northern Syria.

The Syrian regime forces have controlled the provinces of Daraa and Quneitra since July 2018 and imposed a settlement reached under the auspices of the Russian forces. Under the 2018 settlement agreement, the opposition factions handed over heavy and medium weapons in exchange for the release of detainees, the regularization of the situation of the defected and the return of the dismissed employees to their departments.

Sarah al-Hourani, a journalist in Daraa and former volunteer with the Syria Civil Defense known as the White Helmets, told Al-Monitor, “The regime and its allied Iranian militias are seeking to reach towns that are still outside the total control of the regime, most notably Tafas. They seek to reach the borders with Jordan and the Syrian Golan. The recent agreement achieved only part of their goals. I believe the regime will escalate [its actions] in the coming period in order to achieve more gains, take complete control of the rest of the towns in the western countryside of Daraa and implement a wider military deployment.”

Hourani pointed out that the regime’s entry to Tafas is a prelude to extending its control over the entire western countryside of Daraa and preventing any movement against the upcoming presidential elections.

Yassin Abu Mohammad, a political activist from the Daraa countryside who now resides in Jordan, believes the recent Tafas agreement between the regime and the Central Negotiation Committee is an influence-sharing deal between Russia and Iran in southern Syria.

Abdullah said that escalation is inevitable. “Daraa al-Balad is on a date with a similar escalation by the regime that seeks to impose its full control over Daraa province with the help of its allies, Russia and Iran,” he warned.

Abdul Salam Abdul Razak, a military analyst residing in Idlib, told Al-Monitor, “It is no secret that Iran’s strategic objective expands to southern Syria since the provinces of Daraa and Quneitra both border Israel. Iran considers the two provinces geographically important and seeks to use them as a military base in any upcoming confrontation with Israel."