Convoys arrive in Idlib as hundreds of Syrians flee Daraa

Humanitarian organizations in the northern Syrian province of Idlib are preparing to host hundreds of displaced citizens coming from Daraa in the south, where they were forced to choose between giving up their weapons and accepting a cease-fire deal or fleeing. 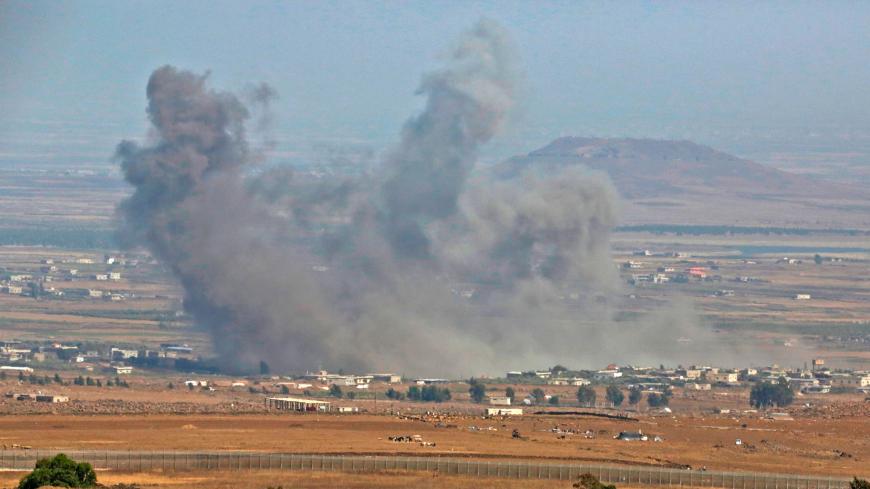 Smoke rises in an area where Russian-backed government forces have been carrying out airstrikes, near the village of al-Rafid in Quneitra province, southern Syria, July 19, 2018. - JALAA MAREY/AFP/Getty Images

ALEPPO, Syria — On the morning of July 16, the first convoy of Syrians displaced from Daraa reached the Idlib countryside in northern Syria. Nine vehicles transported 430 people, including 213 men, 140 children and 77 women. Most of the displaced are militants from the Free Syrian Army (FSA) and their families, in addition to civilians and activists from the towns and cities of the southern Daraa province and Daraa city.

The FSA factions had reached a cease-fire agreement with regime forces mediated by Russia on July 6 in the opposition-held areas in Daraa, except its northwestern countryside. Under the deal, FSA factions agreed to hand over their heavy weapons. Those opposing the agreement would go to Idlib in northern Syria. The agreement came 20 days after the regime forces, backed by Russian airstrikes, launched a violent offensive to take the rebel-held areas in southwestern Syria.

Amine Malhis, the leader of the FSA-affiliated Aleppo al-Shahba Brigade active in Aleppo’s countryside, told Al-Monitor, “The main reason that pushed these people to accept displacement and decide not to stay in their houses and regions is that they do not trust the regime or Russia. Despite the ongoing reconciliation and Russian reassurance that they will not be persecuted, they were still skeptical.”

Those displaced from Daraa reached the Qalaat al-Madiq crossing that separates the opposition-held territories from the regime-held area in Hama’s northwestern countryside. They were then transferred to Saed Camp in the Idlib countryside and Miznaz camp in the Aleppo countryside, and some were sheltered in houses in the cities and towns of Jericho, Jarjnaz, Taftanaz, Saraqib, Sarja, Hbit, al-Dana, Idlib and Maarrat Misrin.

The nonprofit Humanitarian Response, the Civil Defense and the Turkish Red Crescent welcomed the displaced, and the wounded were transferred by ambulances to hospitals in Idlib. Meals and water were offered at the reception point and in the camps.

Abdul Menhem Zukour, a member of Humanitarian Response, told Al-Monitor, “Miznaz in Aleppo’s western countryside welcomed seven displaced families from Daraa, in addition to several single men without their families. They were put in furnished tents equipped with blankets, and meals are served daily. Five families that came to the camp decided to leave July 18 after renting a house in Idlib.”

The Maram Foundation for Relief and Development is a nonprofit funded by donations from world humanitarian organizations to supply the thousands of people in Miznaz with tents, food, clothes and other requirements.

Mohammad Abu Nabbout from Daraa told Al-Monitor while staying in Miznaz, “I fought in the ranks of the FSA in Daraa. I could not believe the FSA leaders made an agreement with the murderous regime. I will not accept reconciliation. This is what I told myself hours before leaving. I decided to accept displacement rather than stay in my town where the regime is in charge. I do not trust the regime-backing militias and Russia.”

Abu Nabbout said he did not have enough money to rent a place in Idlib. His family was not with him, as they all live in Canada. Abu Nabbout hopes to leave Syria and perhaps join his family in Canada, but for now he cannot cross into Turkey, which closed its borders in April 2015 and built a wall along the Syrian border.

The FSA and prominent figures from Nawa city in Daraa’s western countryside reached a new agreement with the Russian forces July 18 after dozens of civilians were killed or wounded in Russian and regime shelling on the city. Its provisions include the factions’ retreat from and handover of the hills surrounding Nawa to the regime forces and some of their heavy and medium weapons. Those who oppose the reconciliation will be transferred to northern Syria.

Fewer Syrians are leaving Daraa than those who have fled to northern Syria in the past months from eastern Ghouta, Homs' northern countryside and south Damascus. Perhaps those who stayed believe Russia has given sufficient guarantees to let them trust the regime and remain, choosing what they see as the lesser of two risks.