Syrian opposition arresting those who promote reconciling with regime

Free Syrian Army factions and Hayat Tahrir al-Sham in northern Syria have launched a security campaign against so-called spies for the regime and advocates of reconciliation in opposition-held areas. 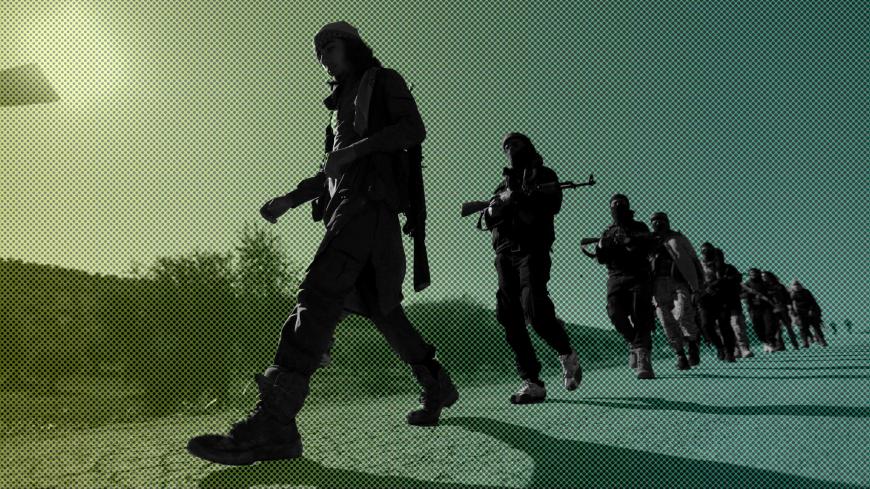 ALEPPO, Syria — Regime opponents have been cracking down on people it accuses of spreading rumors about or urging reconciliation with the government and its allies in northern Syria.

Since mid-July, such rumors have been circulating in opposition-controlled parts of Idlib and neighboring areas in rural Aleppo, Hama and Latakia provinces, along with al-Ghab Plain in Idlib and Hama provinces. There have been reports that an increasing number of people in these areas are calling for reconciliation. The regime’s Ministry of Reconciliation also reports that dignitaries of these areas have contacted the ministry and officials at Khmeimim air base, which is operated by Russia in Latakia, to discuss their surrender.

The rumors, according to regime opponents, broke out a few days before the regime took full control over the southern province of Daraa in a bloody mid-July campaign. President Bashar al-Assad said Idlib would be next, sparking concerns in opposition-held areas in the north.

Capt. Abdel Salam Abdel Razzaq is a leader of the Syrian Liberation Front, which is affiliated with the opposition's Free Syrian Army (FSA). He told Al-Monitor, “After the regime took over Daraa, we were expecting those collaborating with the regime [in the north] to come out and make their voices heard about the need to reconcile with the regime. … We also warned residents about people promoting reconciliation and stressed the need to track them down.”

He added, “Having that many people in opposition-controlled areas promoting reconciliation with the regime is alarming. These people collaborate with the regime and are in constant contact with it. This propaganda is part of the media and psychological warfare the regime has waged against us. It has started to influence public opinion and [stifle] economic movement in Idlib and its surroundings.”

Between July 28 and Aug. 3, Hayat Tahrir al-Sham, a militant coalition of rebel groups, arrested dozens of people it accused of promoting reconciliation in northern Syria or collaborating with the regime and Russia.

Hayat Tahrir al-Sham said some of those arrested had formed a cell that was working to locate fighters in Idlib to hand them over to Russian forces. The Hayat Tahrir al-Sham-affiliated news site Ebaa published a picture showing three individuals said to be part of the cell and reported that one of those arrested had a mobile phone containing marked locations in Idlib and Sarmada.

Local councils in al-Ghab Plain, west of Hama, denied any meetings between the area's opposition representatives and regime officials for reconciliation purposes. Local councils in Qalaat al-Madiq, al-Shariat and al-Tuwaina issued statements denying such meetings as well. On July 31, residents of Maarat al-Numan in rural Idlib and the council of elders of Jisr al-Shughour confirmed that they will firmly deal with anyone spreading rumors or promoting reconciliation with the regime.

Capt. Naji Mustapha, the spokesman for the National Front for the Liberation of Syria, told Al-Monitor, “The FSA factions have also cracked down on those promoting and spreading rumors about reconciliation with the aim of bringing the opposition down.” The front is part of the FSA.

He added, “The National Front for the Liberation of Syria has arrested several groups in Idlib, Aleppo, Hama’s northern countryside and al-Ghab Plain, after finding out that they were promoting reconciliation. These groups were in contact with military and security officers in the regime, as well as with Russian forces at Khmeimim base. We will continue to crack down on such groups and put an end to these rumors.”

A member of the Azaz media center, Abdelkader Haj Othman, told Al-Monitor that the FSA security crackdown has been successful in countering some rumors and preventing their spread. But he added, “Naturally, residents are concerned about the regime attacking the opposition-controlled areas in the north and carrying out massacres. They spread and discuss such rumors on a daily basis out of fear.”

According to the closing statement at the Astana 10 peace negotiations held July 30 in the Russian city of Sochi, there are talks about extending the de-escalation agreement in Idlib and the northern areas under opposition control. However, concerns about a possible regime offensive hang in the air as reconciliation promoters intensify their activity in those areas, regardless of the FSA factions' tightened security measures.