Syrian government forces are resorting to former Free Syrian Army fighters who reached reconciliation agreements with the regime, in its offensive in northern Syria. 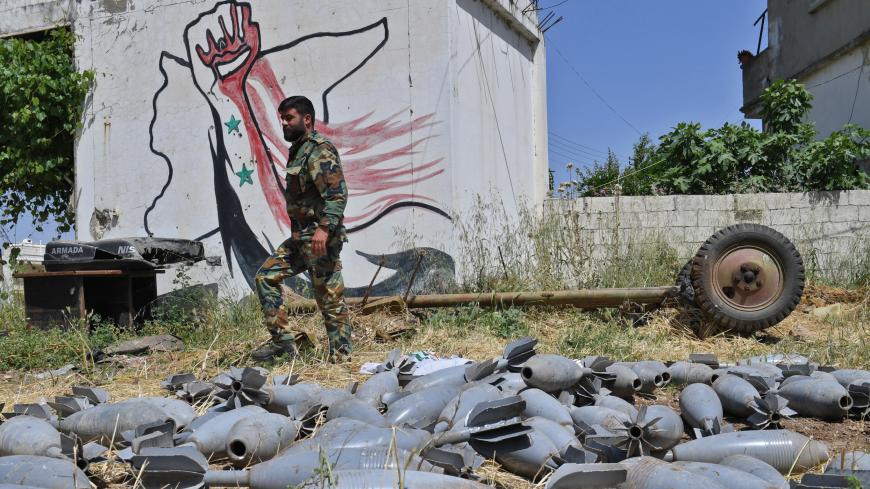 A Syrian government soldier walks past strewn mortar shells in the village of Qalaat al-Madiq, Syria, May 17, 2019. - GEORGE OURFALIAN/AFP/Getty Images

ALEPPO, Syria — In the battles against the armed opposition in the northern Hama countryside, south of Idlib province, the Syrian regime is recruiting fighters of opposition factions who have reconciled with Damascus in recent years, some from the southern provinces of Daraa, Damascus and Quneitra, and others from Homs province in central Syria.

The Syrian government forces have recruited thousands of fighters of the Free Syrian Army (FSA) factions who have reached settlements with the regime in the areas where the opposition was defeated in 2017-18, namely in eastern Ghouta in Rif Dimashq and in the provinces of Daraa, Quneitra and Homs.

Just a few days after Syrian government forces stepped up its offensive against the opposition in Idlib on May 6, many former FSA fighters fighting alongside it were killed. On May 9, regime forces delivered a number of bodies to their relatives in Quneitra. On May 11-13, some of these former FSA fighters from Rif Dimashq were killed in battles, while four others from Douma in eastern Ghouta were killed in battles in the Hama countryside on May 23.

On May 27, the regime handed over the bodies of two former FSA fighters to their relatives in Rastan in the northern Homs countryside. They were killed in the battles of Hama and their bodies were placed in the government's military hospital in Hama before being delivered to the families.

The Jerusalem Brigade, affiliated with the regime forces, lost a number of its members in the battles of Hama, including some former FSA fighters who joined its ranks in 2018. Mohammad al-Haiba, from Barzeh in Rif Dimashq, was killed on May 12 in the northern Hama countryside after opposition fighters set up an ambush. Haiba had been a member of the FSA-affiliated Army of Islam in Barzeh district before leaving for northern Syria in 2017, where he volunteered for the Jerusalem Brigade.

The Jerusalem Brigade has recruited more than 150 former FSA fighters in Damascus and eastern Ghouta since 2018.

Ayman Abu Noqta, an activist from Daraa, told Al-Monitor, “The Syrian regime has transferred a large number of former FSA fighters from the provinces of Daraa and Quneitra to the battlefields in the northern countryside of Hama and southern Idlib province since early 2019. The regime is involving them in the battles against the opposition to solve the shortage in the ranks of its forces.”

Activist Yassin al-Qadah from Daraa province told Al-Monitor that the regime's forces have benefited greatly from former FSA fighters in the current offensive in the north. The government forces often put them in the forefront against the opposition, he noted.

Qadah explained that a number of former FSA fighters defected from the regime forces, after others stationed on the front in the Hama countryside were executed by the regime for not complying with orders and instructions.

These fighters had been on leave in their hometowns in Daraa province after fighting in the ranks of the regime in the north. But once their leave ended in late May, they refused to return to the battlefronts in the regime’s ranks.

A former FSA fighter who fought alongside the Syrian government forces' Fifth Legion told Al-Monitor on condition of anonymity, “I was fighting in the ranks of the Fifth Legion on the fronts in Hama countryside. We arrived there in early May with direct orders from Russian forces. The battle started immediately.”

He added, “The battle was heated and we were able to advance and enter Qalaat al-Madiq area, but many of us died during the operation. Three of my close friends from Quneitra were killed and I really began to fear for my life as I almost got killed several times during battle.”

The fighter continued, “On May 20 I got four days off to visit my family in Quneitra countryside, but when my leave ended on May 25 I never returned [to the north] and hid in Quneitra countryside. The regime forces and their Russian allies want to make us — former FSA fighters — clash with our former fellow fighters and it is extremely hard for me personally. I felt like a traitor, as if I was betraying the blood of those who were martyred.”

The Fifth Legion is backed by Russia, which supplies it with weapons and ammunition and pays the salaries of the fighters. According to the source, they were paid $200 per month.

On May 31, the opposition-affiliated Syrian Islamic Council issued a fatwa prohibiting anyone from joining the ranks of the regime and those of former FSA factions that reached reconciliation agreements with the regime under Russian sponsorship. The council said that joining the regime’s ranks and fighting alongside it is considered a major crime, as those joining would be helping “the infidels” and foreigners against Muslims.

The spokesman of the FSA-affiliated National Front for Liberation fighting against the regime in Idlib, Capt. Naji Abu Hudayfah, told Al-Monitor, “On the battlefield we often clash with former FSA fighters who have reached reconciliation agreements and settlements with the regime over the past couple of years. It is quite unfortunate for them to be fighting against us as tools of the regime, which puts them on the battlefront so they can try to defeat the opposition on its behalf. If they fail [and get killed], the regime would have gotten rid of them and not grieve their death.”