Why is Khan Sheikhoun important for Syrian regime?

Syrian regime forces took full control over Khan Sheikhoun and besieged some opposition-held areas from which a large number of fighters withdrew. 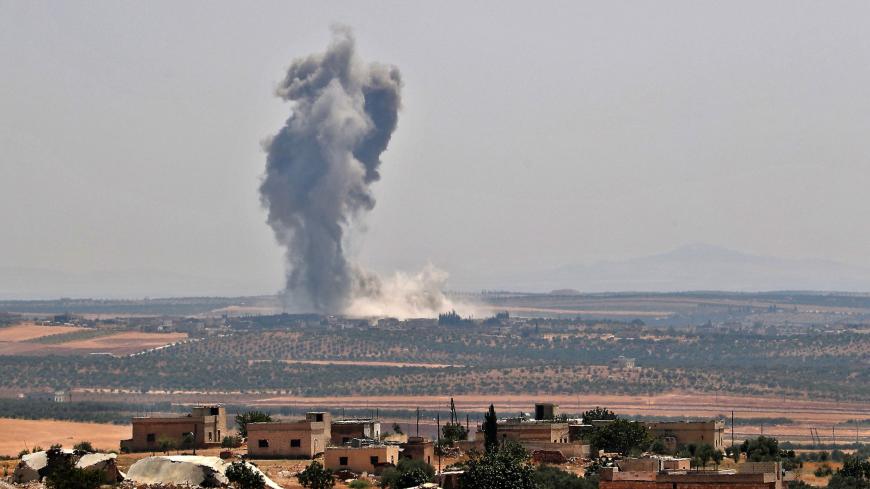 Turkey has not withdrawn from the observation post despite the regime’s siege on the northern Hama countryside. Spokesman for the Turkish presidency Ibrahim Kalin said in a statement Aug. 21 that “Turkey will neither shut down nor relocate its ninth observation post in Idlib,” in reference to the post in Murak town. He added that all Turkish observation posts will carry on with their missions wherever they are located in Idlib.

The northern Hama countryside continues to be held by the opposition, although only a small number of fighters are still there. So far, the regime forces have not entered these areas despite the siege.

The regime forces and allies — consisting of Russia-backed and Iran-backed fighters — reached Aug. 18 the outskirts of Khan Sheikhoun city, after taking hold of al-Faqir checkpoint, located on the northwestern edge of the city. The battles that were raging between the regime forces and armed opposition continued with the regime seeking to make additional advances and seizing multiple checkpoints and hills in the vicinity of the city, to make its way forward into the city’s neighborhoods.

Paving the way for advances, the regime forces carried out heavy air and ground shelling on the outskirts and neighborhoods of Khan Sheikhoun, which have become almost depopulated. The ongoing shelling pushed the residents to move to parts of northern Idlib and northern Aleppo countryside near the Turkish border. The regime forces based their tactics on night offensives against the opposition’s posts, taking advantage of the Russian warplanes air cover. The air raids have targeted cities and towns close to Khan Sheikhoun in southern Idlib countryside, including Maarat al-Numan and Deir Sharqi, killing and wounding civilians.

The regime forces and their allies succeeded in entering Khan Sheikhoun city at dawn on Aug. 20, following fierce battles against the opposition. Spokesman for Hayat Tahrir al-Sham Abu Khaled al-Shami said in an Aug. 20 statement that the heavy shelling prompted the opposition fighters to redeploy to the south of the city. He added that the opposition continues to hold the northern Hamas countryside, namely the towns of Latamneh, Kafr Zita and Murak, located to the south of Khan Sheikhoun.

Speaking to Al-Monitor Aug. 19, Capt. Naji Abu Hazifa, spokesman for the National Front for Liberation, which is affiliated with the Free Syrian Army (FSA), said, “The regime forces and affiliated Russian-backed Tiger Forces and the 5th Corps militias are engaged in a war of destruction in order to take control over Khan Sheikhoun city in southern Idlib. The city was recently subjected to brutal air shelling. On Aug. 18-19, the regime and Russian warplanes carried out more than 200 air raids, targeting the city’s neighborhoods and outskirts. The bombardment has almost brought Khan Sheikhoun to ruins.”

Col. Mostafa Bakkour, military commander of the FSA’s Jaish al-Izza, told Al-Monitor Aug. 19, “We were able to cause the regime forces and Russia-backed and Iran-backed pro-regime militias huge losses in the battles raging around Khan Sheikhoun. This is why the regime and Russian airplanes escalated shelling as a retaliatory reaction. The regime and Russia warplanes fired high-explosive bombs that cause earthquakes and massive destruction of residential buildings.”

In light of the rapid developments on the ground, the fierce battles around Khan Sheikhoun and the regime forces’ and allies’ attempts to enter the city, a convoy of the Turkish army crossed the Kafr Lusin military crossing between Syria and Turkey in northern Idlib on the morning of Aug. 19, and headed toward southern Idlib. The convoy’s destination was seemingly Khan Sheikhoun where it wanted to set up observation posts and prevent the regime forces’ advances. Nevertheless, the regime forces’ airplanes targeted the convoy as it was proceeding on its way to the city. The air raids hit the accompanying FSA military vehicles on the Damascus-Aleppo international highway near Maarat al-Numan. The shelling killed a number of the FSA fighters and caused the convoy to stop.

Speaking to Al-Monitor, Abdel Fattah al-Hussein, a media activist in the opposition-held areas in Idlib countryside and Aleppo, said, “On Aug. 20, the Turkish army’s convoy was still on the side of the Damascus-Aleppo international highway, near Hish town, between Khan Sheikhoun and Maarat al-Numan.” He noted that the convoy “consists of tanks, armored personnel carriers, as well as fighters and officers in the Turkish army.”

He noted that the Turkish forces that are part of the convoy started building positions on either side of the highway where they are stationed near Hish town on Aug. 20. He added that, according to the opposition, the Turkish army is stationed there to protect the area and prevent the regime forces from advancing toward the north, namely toward Maarat al-Numan, and seizing additional towns near the Damascus-Aleppo international highway.

Mustafa Sejari, director of the political bureau of the FSA's Mutasim Division, told Al-Monitor, "The reinforcements that the Turkish army sent to southern Idlib are proof that Ankara is against the regime forces and their allies invading Idlib. Based on that, it dispatched additional military convoys to protect the area from the offensives.”

Khan Sheikhoun’s importance stems from its strategic location on the Damascus-Aleppo international highway. It is a big city in southern Idlib countryside, to the north of the opposition-held northern Hama countryside. On Aug. 12, the regime forces started advancing toward the city, one day after taking control over Hbit town, west of Khan Sheikhoun; they also took control over Sukayk town on the same day, located south of Idlib, to the east of Khan Sheikhoun.

Taking control over Khan Sheikhoun allowed the regime to observe the narrow road linking northern Hama to the southern Idlib countryside, and made it easy for them to lock down on the opposition-held areas in the northern Hama countryside Aug. 21. It also forced a large part of the opposition factions to withdraw from their stations in Latamneh, Kafr Zita, Murak and other towns in northern Hama. Furthermore, taking control over Khan Sheikhoun, which is located on the Damascus-Aleppo international highway, would allow the regime forces to continue to advance toward the north and establish hegemony over additional kilometers of the international road and probably reach Maarat al-Numan.