Syrian opposition groups wonder what value the Turkish observation posts and the Turkish army have in Idlib, as the Syrian regime forces make great advances in the area. 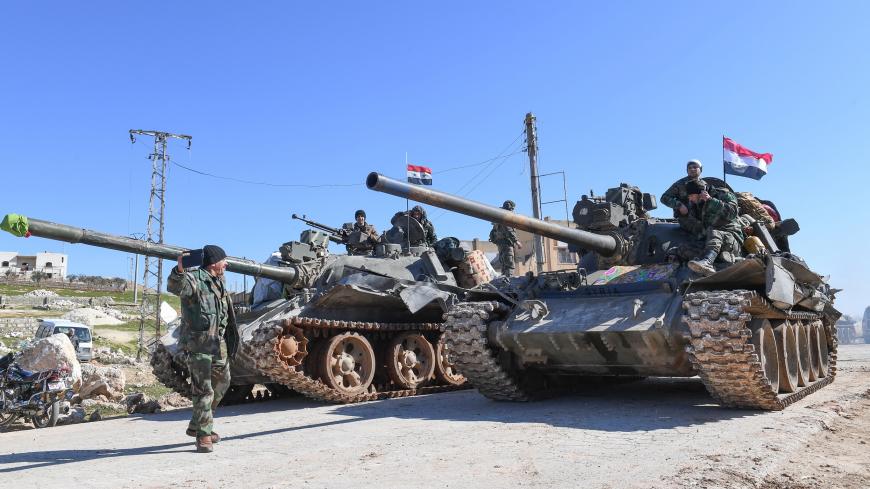 ALEPPO, Syria — The Russian-backed Syrian regime forces and their loyal militias regained full control of the strategic M5 highway, connecting Aleppo to Hama, Homs and Damascus. The Syrian government forces have been also rapidly advancing toward the towns of the western Aleppo countryside, which has come under heavy airstrikes since the beginning of February, and made new gains Feb. 16.

The Syrian regime and Russian warplanes and helicopters have caused horrific massacres against civilians, according to reports. Large groups of displaced Syrians from the targeted areas have been swelling near the Syrian-Turkish border.

The Turkish-backed opposition groups are trying to regroup and regain control over their areas. On Feb. 11, the opposition downed a Syrian regime helicopter, killing the pilot, and was able to retake the town of Sheikh Dames, in Maaret al-Numan some 20 miles (32 kilometers) south of Idlib city.

However, it appears that the Syrian opposition groups will not be able to stop the advance of the regime forces except through a ground attack with presumed support from Turkey. The balance of power has been greatly tipped in favor of the Syrian regime in the latest battles, given its sophisticated weapons and air support. The opposition, on the other hand, lacks capabilities, arms and ammunition.

Ankara condemned the attacks and threatened to retaliate but does not seem to have taken a clear decision to provide the opposition factions with substantial military support, although five Turkish soldiers were killed Feb. 10 in a Syrian airstrike on a Turkish army location north of Idlib.

Earlier, 13 Turkish soldiers were injured in a Feb. 2 airstrike on a Turkish location in the village of Tarnaba, in eastern Idlib.

The Turkish army, however, continues to send military reinforcements into Idlib, including soldiers, armored vehicles and tanks. Meanwhile, on Feb. 10, officials from the Russian and Turkish defense and foreign ministries and Turkish intelligence, as well as Russian Deputy Foreign Minister Sergey Vershinin and Kremlin special envoy to Syria Alexander Lavrentiev, held talks in Ankara to discuss the situation in Idlib. A previous round of talks was also held in the Turkish capital Feb. 8 between Russia and Turkey.

The opposition forces, upset about the turn of events, deemed the Turkish observation posts set up for de-escalation to be ineffective as they did not stop the ground advance of the regime. This was especially true after the regime forces on Feb. 7 captured the city of Saraqeb, which sits at the intersection of the M4 and M5 highways.

The regime was able to take over Saraqeb despite the existence of four Turkish military points on the outskirts of the city; however, they were completely surrounded by the regime forces.

Yahya Mayo, the media coordinator of the Syrian National Army (SNA) of the Free Syrian Army, told Al-Monitor, “The poor reactions of the Turkish army toward the advance of the regime forces in Idlib encourage the latter to keep progressing, disregarding the Turkish posts, which were ineffective in stopping them. When we were being bombarded [within the de-escalation zones], the Turkish response was limited.”

Alaa al-Rahman, of the city of Idlib, told Al-Monitor, “The Turkish observation posts that spread in Saraqeb’s vicinity were useless and did nothing to stop the regime from taking control over the city. We had pinned hopes on these posts.”

Mohammad Rashid, a Syrian journalist from the opposition-held al-Ghab Plain in the northern Hama countryside, told Al-Monitor, “We are hoping that the balance of power will be tipped in favor of the opposition when the large Turkish military reinforcements enter the area.”

“What happened in Saraqeb came as a shock to us. I thought the Turkish posts would stop the regime forces from advancing into the city. What happened was exactly the opposite. Hanan Maher, a student at the University of Idlib, told Al-Monitor.

Photojournalist Humam Isa, from Idlib countryside, said, “The Turkish observation points contributed to the fall of the opposition-held areas in the hands of regime forces. The Turkish army did not stop the shelling to protect the civilians and did not offer enough support to the opposition to be able to defend its area,”

“It all seemed as if Turkey reconciled with Russia to give covert consent to the regime's offensive to take control over the M4 and M5 highway,” Issa told Al-Monitor.

“Syrians blame Turkey for the ongoing Syrian regime advance, the displacement and shelling. They had pinned high hopes on the Turkish army to prevent the Syrian regime from taking over the remaining areas,” Mohammad Idlibi, a teacher in the countryside of Aleppo, told Al-Monitor.