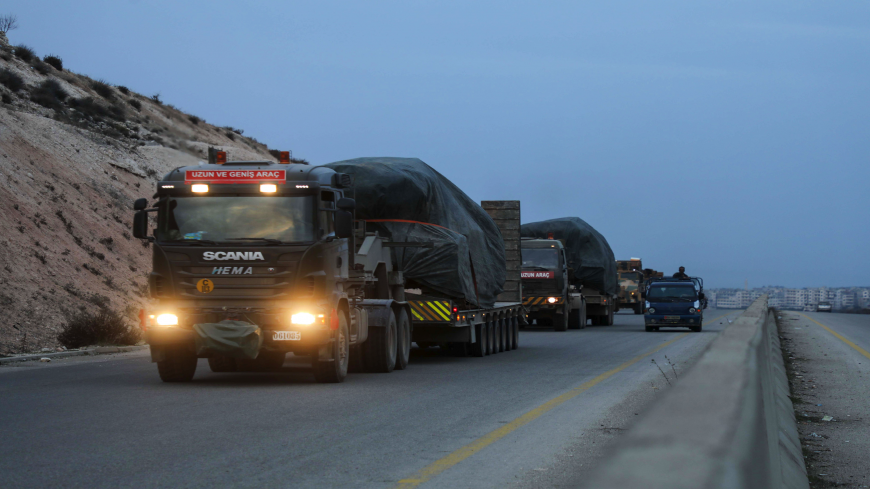 Turkish army vehicles drive on the M4 highway near the town of Ariha in Syria's rebel-held northwestern Idlib province on Jan. 4, 2021. - AAREF WATAD/AFP via Getty Images

ALEPPO, Syria — The opposition factions in Idlib confronted Jan. 14 a ground attack launched by the Syrian regime forces on al-Ankawi axis in al-Ghab Plain in northwest Hama that lies south of the strategic M4 highway.

There have been repeated infiltration attempts recently on the part of regime forces on opposition sites. The heaviest attack took place on Jan. 11, causing the death of 11 fighters from the Jaysh al-Nasr faction of the National Liberation Front (NLF).

The regime forces have recently intensified their violations of the cease-fire announced by Russia and Turkey in March 2020 in northwest Syria, as their artillery and missile strikes killed civilians in the villages of Jabal al-Zawiya as well as other areas near the contact lines in the south and east of Idlib and in al-Ghab Plain. The opposition factions have responded by shelling regime positions around Idlib.

Idlib is seemingly headed toward further military escalation between the regime and the opposition, raising concerns among the popular opposition circles over the return of military operations between the two sides.

Also, the flow of Turkish army reinforcements toward Idlib is fueling such concerns and suggesting that a battle could be imminent.

The evacuation of the Turkish army observation points in the regime-controlled areas around Idlib might also be among the most important factors indicating that Idlib has entered a new phase. In this context, the question arises as to whether the cease-fire will hold, whether the relative calm will continue and whether a new round of battles is set to start.

The evacuation process of the Turkish military points in the regime-controlled areas, which the Turkish army started on Oct. 20, 2020, has come to an end. The Turkish observation point stationed on the M5 international highway near the Dweir Junction north of Saraqeb completed its withdrawal on Jan. 12 toward the opposition-controlled areas in south Idlib. The overall evacuation and withdrawal operations included 14 Turkish observation points in the countryside of Aleppo, Hama and Idlib. These points were located in areas under the control of the regime between May 2019, when the regime military operations started in Idlib, and early March 2020, when the fighting stopped after the announcement of the cease-fire.

The rapid field developments in Idlib seem to have also worried the National Coalition for Syrian Revolutionary and Opposition Forces, which issued a statement on Jan. 15 denouncing the attacks of the regime forces on Idlib. The statement said, “The attacks of the regime and its allies on Idlib are systematic war crimes, as the constant air and missile strikes, the repeated infiltration attempts and the hovering of reconnaissance aircraft are part of an organized campaign of escalation aimed at restoring the climate of killing, displacement and massacres.”

Majed Abdalnoor, a journalist who lives in the Idlib countryside, told Al-Monitor, “The current escalation in Idlib is a natural beginning of a new phase after the Turkish evacuation operations from the regime’s areas. Each side is trying to feel the military pulse of the other, and I do not expect the matter to escalate to a large military operation, as the regime is busy fighting the Islamic State, whose strength is growing in the Syrian desert.”

Mahmood Talha, a journalist who works with the opposition Thiqa News Agency in the countryside of Aleppo, told Al-Monitor, “The Turkish army evacuation from 14 observation points took place as a large number of [other] Turkish military points were deployed in Jabal al-Zawiya and al-Ghab Plain south of the Aleppo-Latakia (M4) road. This infers that the Turkish forces that withdrew from the points inside the regime-held areas did not return to the Turkish territory but were used to form a defensive wall in south Idlib, thus making it difficult for the regime forces and their allies to launch a new battle.”

Abdulslam Abdulrzaq, a military analyst, told Al-Monitor, “The Turkish army has recently established an important defensive line opposite the fronts with the regime forces, and the new Turkish points appeared to be more widespread in the Jabal al-Zawiya region due to their strategic importance.”

Regarding the distribution of the Turkish points in Jabal al-Zawiya, Mohamad Rasheed, a journalist who works with the Hama Media Office, told Al-Monitor, “The most important [Turkish observation] point is the Tal al-Nabi Ayyub point, which sits on the highest peak of the southern countryside of Idlib overlooking large areas under the control of the regime forces. There are also two points in the vicinity of the town of Shnan and two points near the village of Sarjah, while the rest of the points are spread across Ahsem, Balyun, Deir Sunbul, Farkia, Tal Maarata, Qoqfin, Tur’an, Marzaf, Nahleh, al-Bara, Deir Sunbul and Ar-Ruwaihah, and the Turkish army is deployed in several points near the international M4 road south of Idlib. Chief among these are the points of Maataram and al-Qiyasat as well as the schools of Basanqul and Mohambel.”

Mohamad al-Bukaie, a political science lecturer who works in opposition universities in northwest Syria, told Al-Monitor, “The Syrian regime wants to embark on a new round of battles in Idlib in an attempt to escape from the crises it is facing, namely the economic crisis, the Israeli bombing and the proliferation of Iranian militias. However, the regime is unable to bear the costs of any military operation that it may launch in Idlib. The Turkish military deployment in Idlib is enormous. There are more than 20,000 Turkish soldiers equipped with advanced weapons that can tip the balance of power in favor of the opposition should the regime go so far as to wage war.”