Government forces escalated tensions on the battlefronts in Idlib in response to Hayat Tahrir al-Sham targeting the town of Kassab in the Latakia countryside after installing a statue of former Syrian President Hafez al-Assad. 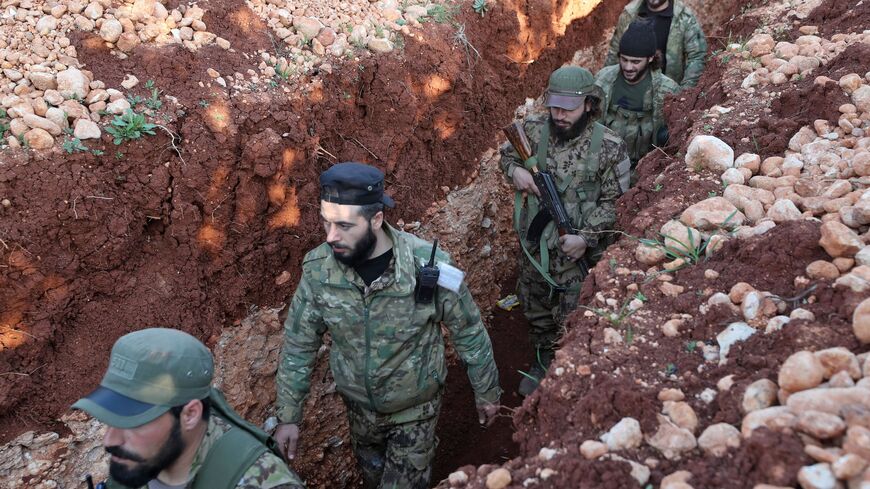 Syrian rebel fighters for the National Liberation Front advance in a trench on the front line facing regime forces from the strategic rebel-held town of Saraqeb, in the eastern part of the Idlib province in northwestern Syria, on Feb. 15, 2021. - OMAR HAJ KADOUR/AFP via Getty Images

ALEPPO, Syria — Military tension has escalated on the battlefronts between government forces and the Syrian opposition in Idlib. Since mid-June, violent clashes, shellings and attacks have occurred on the battlefronts, with both sides carrying out infiltration attempts and causing major losses within their ranks.

On June 18, al-Nasar Army (Victory Army), a faction of the National Liberation Front of the Turkey-backed Free Syrian Army (FSA), attacked one of the Syrian government forces’ posts in the Fatatira village in the Ghab Plain northwest of Hama. The targeted axis is located to the south of the M4 highway, south of Idlib.

The attack killed a number of government forces, including an officer. Government-affiliated official media outlets did not report any casualties within the government forces’ ranks, while several pro-government Facebook pages mourned the killing of Capt. Ali Shabasi as well as Mahmoud Khouzami, Muhammad Jaara and Omar Hamdo, all of whom served in government forces.

A military commander of the FSA’s National Liberation Front told Al-Monitor that a team of al-Nasar Army’s special forces infiltrated a post where members of the government forces are stationed in the Fatatira axis at the Ghab Plain fronts and clashed with them, killing six members. He explained that this operation came in retaliation against government forces who recently killed a number of the faction’s fighters in the Fleifel axes south of Idlib and the Saraqib axis east of Idlib.

The confrontations on the fronts west of Saraqib east of Idlib between Hayat Tahrir al-Sham (HTS) and government forces were the heaviest on June 16 and resulted in the killing of five fighters from HTS and the FSA’s National Liberation Front.

Pro-government media outlets reported that government forces thwarted an infiltration attempt by opposition factions at the Sarmin-Saraqib axis in the eastern Idlib countryside and inflicted heavy losses in terms of casualties and equipment within their ranks. On the other hand, HTS said on June 17 that its snipers killed four government forces in retaliation for the killing of its fighters.

The escalation on the fronts in northwestern Syria dates back to June 15 when HTS shelled Kassab in the northern Latakia countryside where a statue of the late President Assad was being installed in one of the city’s squares.

Speaking to Al-Monitor on condition of anonymity, an HTS military commander in Idlib said “HTS’ artillery and missile battalion fired Grad rockets at the regime forces’ ceremony in Kassab town to install a new statue of Assad’s father, which damaged some buildings, set fire to the bushes near the area, and killed and wounded a number of regime officials attending the ceremony.”

The source added, “The escalation on the battlefronts in Idlib and its surroundings is not only due to our attack on Kassab at the ceremony of installing the tyrant’s statue, but also to the magnitude of the losses inflicted on the regime forces in the past few months in HTS’ sniper operations. It seems that the regime is determined to retaliate and to follow the same tactic of deploying snipers at the battlefronts so as to achieve a balance of power.”

HTS places great importance on snipers and recruits new people to its sniping brigades to increase the number of snipers on the fronts. It seems that HTS has night vision binoculars and advanced sniper rifles, which enabled it to inflict heavy losses within the government forces’ ranks.

Col. Mustafa Bakour, a military analyst who resides in Idlib, told Al-Monitor, “The FSA and HTS’ reliance on sniper weapons on the battlefronts has confused the regime forces due to the heavy losses they have suffered. We noticed that the Russian forces have recently supported the regime forces and provided them with a large number of modern sniper rifles that are being tested for the first time on the Idlib fronts, with the aim of reducing the regime forces’ losses, and following the same tactics used by the factions and HTS.”

National Army Cmdr. Abdul Salam Rizk told Al-Monitor, “The sniper weapon is very important for irregular factions such as the Syrian opposition factions that do not have heavy weapons and military equipment similar to the regular armies. The snipers can paralyze the enemy’s military group at the battle axis, prevent its movements and detect any infiltration attempt that the enemy might think of. Resorting to snipers on the Idlib fronts, where major battles have stopped since the beginning of 2020, is a good choice for the opposition to retaliate to the regime forces’ shelling, because this weapon is less expensive than other high-priced weapons such as artillery, mortars, missiles and others.”

Rizk added, “It is safe to say that the FSA factions, as well as HTS, are now more capable of adopting diverse and modern military tactics, and they have different types of light and medium weapons and the necessary equipment such as binoculars and monitoring devices. This means that they can deal painful blows to the regime forces. This development annoyed the regime and pushed it to escalate and retaliate by increasing the bombing and targeting the populated towns and villages near the fronts."