The residents of Idlib in northwest Syria fear a military escalation at the battlefronts where the regime and opposition are escalating their military activities. 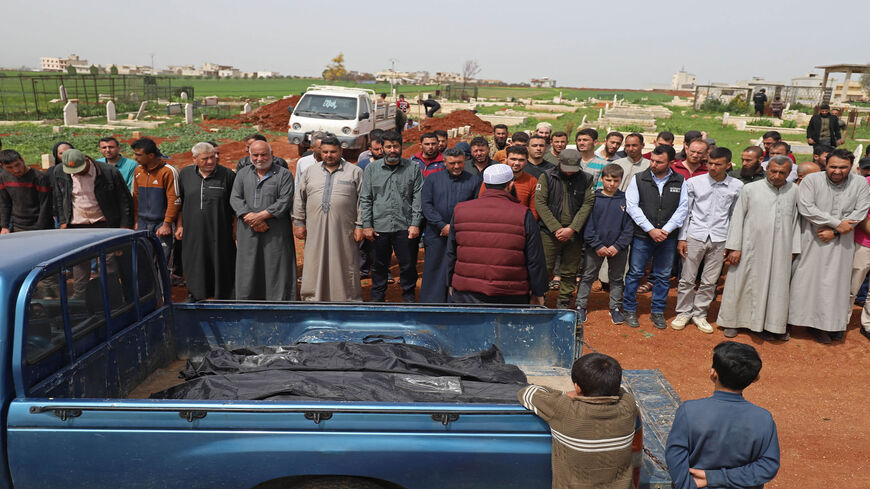 Mourners pray over the bodies of children killed on their way to school after regime forces shelled the village of Maaret al-Naasan, Idlib province, Syria, April 4, 2022. - Abdulaziz Ketaz/AFP via Getty Images

ALEPPO, Syria — The battles between the Syrian government forces and opposition fighters have recently intensified in Syria’s northwestern province of Idlib, where both sides have been making military movements and redeploying their troops. The Russian aircraft, meanwhile, have escalated their air raids in support of government forces.

The escalation comes after a relative calm in March, following the Russian invasion of Ukraine Feb. 24.

On April 4, four children were killed by Syrian regime’s artillery shelling on Maaret al-Naasan village, in the northeast of Idlib. According to the Syrian Civil Defense, known as the White Helmets, the children were killed on their way home from school in Maarat al-Naasan, and the rescue forces retrieved their bodies and handed them over to their families for burial.

The regime’s bombardment reached in the past days the vicinity of Kansafra and Bara villages in Idlib’s southern countryside. Meanwhile, the regime and opposition forces exchanged artillery shelling on the Maarat al-Naasan axis.

The regime and Russian forces have repeatedly bombarded the town of Maarat al-Naasan in the past weeks, which is close to the demarcation lines.

On Feb. 12, five members of the same family were killed by the regime and Russian forces’ mortar shells targeting their house in the town of Maarat al-Naasan.

On March 23, the regime forces intensified artillery and missile shelling on Maarat al-Naasan and a number of other villages close to the frontlines in Idlib countryside.

On April 4, Turkish-backed opposition factions and Hayat Tahrir al-Sham (HTS) retaliated for the killing of the four children.

The HTS-FSA joint action coincided with an attack by the artillery battalion of Ansar al-Islam, a Kurdish jihadi group operating in the area but not affiliated with HTS, that targeted a regime forces’ camp on the Hizareen axis. Several casualties were reported among the regime forces’ ranks.

Jihadi forces opposing HTS in Idlib rejected the opposition factions’ and HTS’ retaliation for the killing of the children. According to them, the response was not fruitful because it will not deter the regime.

Others accused some factions’ leaders of treason for keeping silent on the regime’s killing of the children in Maarat al-Naasan.

Meanwhile, other jihadis condemned the Russian escalation in Idlib.

Ansar al-Din Front leader Abu Abdullah al-Shami said on his Telegram channel April 4, “The occupiers [in reference to Russia] and their tools are committing massacres against our people, and [we are sending] successive bloody messages to always recall that our enemy only understands the language of blood.”

On April 4, Russia launched a series of air raids with termobaric bombs in Fulayfil, which is close to Safahun town in the Jabal al-Zawiya area, in the southern countryside of Idlib.

On March 28, the Russian jets launched the first air raids by Russia in northwest Syria since the beginning of the Russian invasion of Ukraine. The airstrikes targeted the outskirts of the town of Maarat al-Naasan.

As April approached, Russian aircraft and reconnaissance overflights increased in the skies of Idlib. On March 27, the Syrian regime forces targeted with an anti-tank guided missile a Turkish military armored vehicle in western Aleppo. They also hit a Turkish post near the villages of Mkalbis and Sheikh Suleiman in the western countryside of Aleppo. On March 28, local media reported that a Turkish soldier died of his wounds.

Speaking to Al-Monitor on condition of anonymity, an HTS military commander said, “The Russian occupier wants to show force and compensate for its losses in Ukraine in front of innocent people, civilians and Syrian children during the holy month of Ramadan. It seems that the brutal occupier seeks to escalate [its actions]. We expect it to step up the shelling in the coming period. Our forces, however, are ready to deal with any military emergency, and we have enough military equipment and fortifications to respond to the regime and its Russian ally.”

Meanwhile, the opposition popular circles in Idlib fear a military escalation, amid reports that the opposition and regime forces are on alert at the battlefronts.

Col. Mustafa Bakkour, a Syrian army defector, told Al-Monitor, “We do not rule out the possibility of a reescalation by the regime and Russia. The latter may take revenge on the people in Idlib because of the major losses it incurred in Ukraine. It could be through this escalation, which may evolve into a military operation so as to achieve an alleged victory and boost the morale of its fighters who were humiliated in Ukraine.”

The news agency indicated that the squad members underwent training under the supervision of Russian trainers, and that Hassan's presence gave the trainees confidence.

A local source close to the Syrian government forces in government-held Maarat al-Numan in Idlib countryside, told Al-Monitor on condition of anonymity, “Brig. Gen. Suhail al-Hassan, who is close to Russia, ordered to put [the forces] on higher alert in the area, in conjunction with the exercises he supervised. There is no information of an imminent military action against the opposition in Idlib so far.”

These developments coincided with the Turkish army sending military reinforcements to Idlib, where it recently rearranged its military posts, specifically in Jabal al-Zawiya in Idlib, and south of the strategic M4 highway in the country's east and west.