The Syrian opposition is getting ready for a possible attack by Syrian government forces in Idlib, following increasingly intense bombing and reconnaissance attacks since the beginning of September. 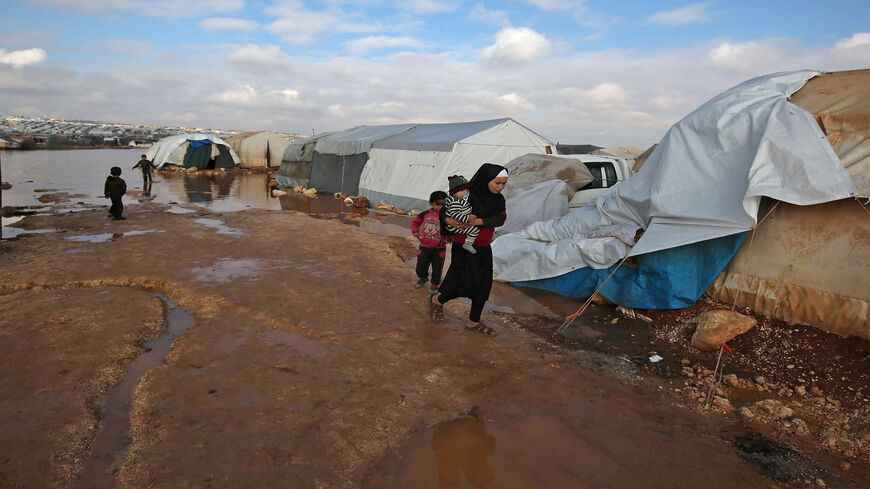 A Syrian woman walks by tents at a camp for the internally displaced, near the town of Kafr Lusin, Idlib province, Syria, Jan. 19, 2021. - Aaref Watad/AFP via Getty Images

ALEPPO, Syria — The Syrian opposition fears renewed battles in the northwestern province of Idlib, amid escalating tension between Turkey and Russia, which has been clearly reflected in the opposition-controlled areas through increased military escalation since the beginning of September.

The Syrian government and its Russian ally have stepped up their air and ground bombardment on opposition-held areas in the countryside of Idlib and Aleppo, with the shells reaching areas as far as Jabal al-Zawiya south of Idlib, which is normally at bay from bombing.

During a joint press conference with his Israeli counterpart Sept. 9 in Moscow, Russian Foreign Minister Sergey Lavrov said Turkey was not able to carry out the agreements in relation to separating the Syrian opposition from terrorists in Idlib.

Lavrov’s statement fueled the Syrian opposition’s concerns as it fears that the cease-fire reached in March 2020 could come to an end.

In contrast, Turkey and the Syrian opposition have been moving to counter the Russian military escalation.

On Sept. 13, a Turkish military convoy entered Idlib in an apparent bid to boost protection for Turkish army bases in the Jabal al-Zawiya area. The Turkish-backed Free Syrian Army (FSA) factions and Hayat Tahrir al-Sham (HTS) intensified their attacks on government positions on the Idlib fronts.

On Sept. 8, Turkish Defense Minister Hulusi Akar visited a Turkish military base in Azaz in Aleppo countryside. On Sept. 11, he conducted an inspection tour of Turkish military units in Hatay, on the Turkish-Syrian border, after the killing of Turkish soldiers in a roadside bomb on the road between Idlib city and Binnish.

Akar also responded to Lavrov’s statements in which he accused Turkey of not complying with the Idlib agreement.

A military official in the FSA-affiliated National Liberation Front in Idlib, told Al-Monitor on condition of anonymity, “The Syrian regime and Russian forces did not only step up their air and ground shelling, which targeted populated areas in a bid to spread terror among the population, but they have also increased their infiltration attempts on the southern fronts of Idlib.”

He said, “The escalated rounds of shelling and infiltrations mean that the regime and its allies are keen on restarting the battles. The infiltration operations fall within the framework of force reconnaissance in a bid to pinpoint the factions’ location in the area and assess their military capabilities, which must be taken into account for any potential attack."

The source added, “The FSA factions — with the support of Turkey — are getting ready for any sudden attack on Idlib, and will not stand idly by if the cease-fire comes to an end.”

Mohammed Ibrahim, a resident of the Jabal al-Zawiya area in the southern countryside of Idlib, told Al-Monitor, “The Russian jets have been carrying out daily airstrikes on the villages and towns of Idlib, while the regime forces continued their artillery shelling on the same areas, in addition to the ongoing overflights by Russian and Iranian reconnaissance aircraft.”

He said, “All these developments are indications of an imminent battle, and I am seriously considering moving my family to a safer area north of Idlib."

The Syrian military opposition circulated information about HTS withdrawing part of its weapons from Jabal a-Zawiya’s fronts — a move that was denied by HTS’ media, which confirmed that the arms remained in place and stressed the fighters' readiness to retaliate to the government forces.

This information, however, caused panic among the Jabal al-Zawiya population, prompting many to leave the area for fear of renewed battles. The civilians’ displacement has significantly increased with the military escalation in areas in southern Idlib during the past two weeks.

“The artillery and missiles are deployed on various fronts with the regime forces and are being used on a daily basis to target enemy positions,” he told Al-Monitor.

Despite the opposition’s growing fears of an imminent attack by the government forces on Idlib, no unusual military movements on the part of the Syrian government were observed on the fighting fronts during the past few days. No military reinforcements arrived on the contact lines in preparation of the anticipated attack.

Muhammad al-Sukari, researcher at the Jusoor Center for Studies in Istanbul, told Al-Monitor, “One of the reasons for the military escalation is Russia’s fear of possible American-Turkish rapprochement in relation with the US withdrawal from northeastern Syria without coordination with Moscow. This is why Russia is warning by means of military escalation and threatening to end the Sochi agreement — notably the March 2020 [cease-fire] — by stepping up bombing operations.”

He said, “The current military escalation could develop into a full-blown military operation should Turkey fail to abide by Russian demands. Restarting battles is not difficult for Russia, especially since Moscow has the excuse for such a move, namely Turkey’s inability to separate the moderate opposition from the radical fighters.”

Syrian President Bashar al-Assad’s visit to Moscow Sept. 13, which was announced by the official SANA news agency, raises several questions, most importantly whether this visit will cause more tension between Russia and Turkey, or pave the way for a greater escalation in the Syrian opposition areas in northwestern Syria.