Syrian government forces have stepped up their attacks against Idlib, causing civilian casualties as Russian warplanes continue to raid different areas of northwestern Syria on an almost daily basis. 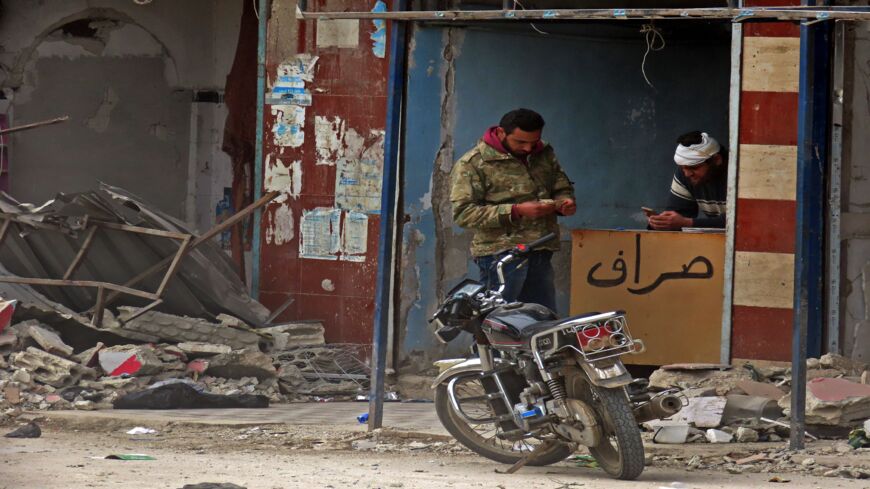 A Syrian man counts his money at a currency exchange counter in the town of Binnish in Syria's northwestern Idlib province, near the Turkish border, on March 6, 2020, following a Russia-Turkey cease-fire deal. - MUHAMMAD HAJ KADOUR/AFP via Getty Images

The Syrian Observatory for Human Rights reported Sept. 7 that “a woman succumbed to her wounds sustained in artillery shelling carried out by the Syrian regime forces on al-Dabbit neighborhood in Idlib city. One of the fired shells also targeted a swimming pool and park located on the outskirts of the eastern city of Idlib, killing two and wounding five others.”

In another report, the war monitor indicated that between Sept. 1 and Sept. 6, Russian warplanes launched 46 airstrikes in the areas where the cease-fire reached between Russia and Turkey in March 2020 is in place, targeting the countryside of Latakia, Hama and Idlib.

The following day, six Russian raids targeted the hills of Kabana and Tallat al-Khoudur in the countryside of Latakia, as well as Sarmaniya in the countryside of Hama. And from Sept. 3 through Sept. 6, daily raids by Russian aircraft targeted locations in the Idlib countryside, with raids intensifying on Sept. 8 and showing no signs of slowing down.

The ongoing Russian airstrikes raised the concerns of residents over the possibility of the Syrian government carrying out military action in those areas. As a result, some families decided to flee; others preferred to get rid of their furnishings to make it easier for them to leave in the event of battles.

Hardly a day goes by without Russian planes carrying out a number of raids, especially in western Idlib and the Jabal al-Zawiya area.

Omar Jumaa from the town of al-Bara in Jabal al-Zawiya told Al-Monitor, “I fled to the northern camps near the Turkish border as the regime bombarded on a daily basis my town and the villages in Jabal al-Zawiya. Add to this the daily Russian airstrikes. Most of the residents of those villages fled to safer areas. Despite the so-called cease-fire reported in the media, it looks like there is war on the ground.”

For his part, Sameh Nabil, a Free Syrian Army leader residing in Idlib, told Al-Monitor, “As factions, we expect the regime to launch military action in Jabal al-Zawiya. After settling the Daraa issue, regime forces may head toward Jabal al-Zawiya. We have braced ourselves for such a possibility and developed appropriate military plans.”

He added, “Unfortunately, Turkey is sitting idly by even though it is a party to the cease-fire that was agreed to on March 5, 2020, in Moscow. However, the Turkish side in Jabal al-Zawiya is merely watching as Russian planes bombard the towns of Jabal al-Zawiya near the positions of the Turkish army.”

Naji Abu Hudhaifa, an Idlib-based spokesperson for the National Liberation Front, which includes several armed opposition factions in northern Idlib, told Al-Monitor, “The escalation carried out by the Russian planes and the regime’s artillery has been ongoing. We responded by bombing several regime positions in Saraqib from where regime forces launch their attacks against civilians in Idlib.”

He added, “We have declared full readiness to confront any military operation on the part of the regime, and we are monitoring the movements of the regime forces at the lines of contact.”

Abu Muslim al-Shami, an Idlib-based military commander in HTS, told Al-Monitor the "factions of Al-Fatah al-Mubin (Great Conquest) operations room, which is led by HTS, directly deal with the sources of aggression. After the bombing of Idlib city, we targeted locations deep within the regime [areas] inside the city of Saraqib, which resulted in several explosions inside the city. We also targeted several other areas. We, the military factions, are bracing ourselves for all kinds of possibilities. We are aware that our enemy is [murderous].”

Majd Kilani, an Idlib-based researcher at the Jusoor Center for Studies, told Al-Monitor, “Turkey supports the factions to confront any infiltration in the wake of the recent Astana meeting, where it was agreed to support the factions’ bombing of regime sites in response to the escalation. However, field and political indicators do not point to a Russian or regime plan to start battles neither in Idlib nor elsewhere. Russia presents itself as a guarantor of the political track. On the ground, there are no indications of the regime’s intention to open battles, at least in the near future.”

Kilani further warned, “The humanitarian situation is catastrophic in Idlib as winter draws near amid another possible coronavirus wave and more possible rounds of bombing operations.”

Muhannad Darwish, a resident of Idlib, told Al-Monitor, “I think the regime has settled the Daraa issue and is close to settling the issue of Syria’s Badia, which has been combed in search of Islamic State cells. I believe the calm that previously existed [in Idlib] was due to the regime’s plan to settle the issues of Daraa and the Badia desert. But since those issues have been settled, escalation will return to Idlib.”

Darwish believes “Turkey is working hard to have the cease-fire hold in Idlib. Turkey has specific interests and is the weakest link in Syria, so it believes an escalation would not be in its interest. However, I believe if the cease-fire collapses and the battles resume, the Turks will not stand idly by. The quality of their military deployment is different today.”