A military escalation on all axes and from all sides in Syria followed the Tehran summit. 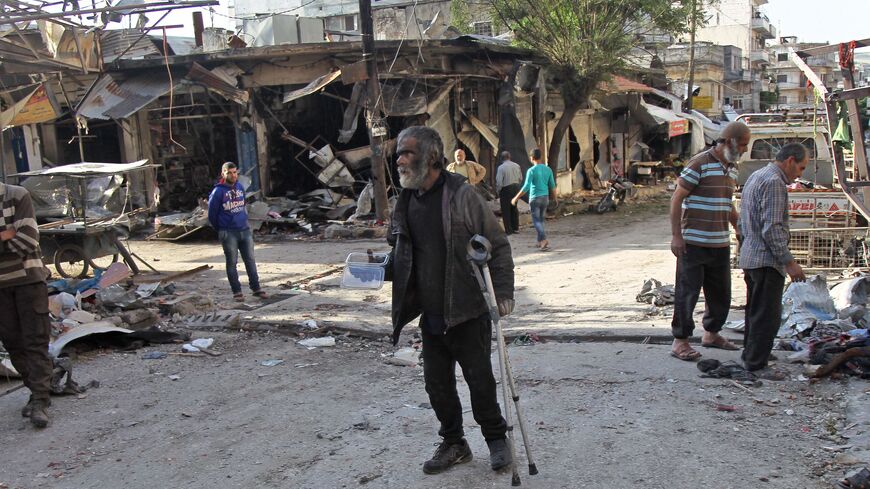 A Syrian man whose shop was destroyed in a regime aerial bombardment the previous day walks around the area on May 15, 2019, in Jisr al-Shughur in Syria's jihadi-held Idlib province. The regime and its ally Russia have intensified attacks on Idlib and neighboring provinces despite a months-old buffer zone deal intended to shield it from any government offensive. - AMER ALHAMWE/AFP via Getty Images

After the tripartite meeting in Tehran between Russia, Turkey and Iran to discuss the Syrian file, shelling and attacks escalated between the parties to the conflict in Syria. The regime forces and Russia attacked Hayat Tahrir al-Sham (HTS) and other factions in Idlib, while the Syrian Democratic Forces (SDF) fought off the Turkish army and the Turkish-backed Free Syrian Army (FSA) in northeastern Syria and north-central Syria.

The escalation began after the Russian air force launched airstrikes on the outskirts of the village of Yacoubiyeh in the Jisr al-Shughur countryside west of Idlib, killing seven civilians and injuring several others, including women and children who were trapped under the rubble.

The Turkish forces also bombed several areas under SDF control, especially in the area of ​​Tal Rifaat and the villages of Ain Issa, Tal Tamr and Kobani, with a Turkish drone targeting a car on the road between Qamishli and al-Qahtaniyah that killed three people. The Kurdish forces represented by the SDF responded by bombing the forest of the town of Kafr Jannah in the Afrin region and the vicinity of the city of Azaz, which is under FSA control. Meanwhile, the Turkish army bombed the vicinity of the city of Tal Rifaat, injuring several civilians.

Humam Issa, a field journalist based in Idlib, told Al-Monitor, “The regime forces sent huge military reinforcements from the 25th Division and the National Defense Forces to the city of Maarat al-Numan and the outskirts of Kafranbel south of Idlib. Tanks, armored vehicles and trucks loaded with weapons and logistical equipment arrived in Saraqeb in the Idlib countryside, and military crowds affiliated with HTS were seen heading toward the town of Maarat al-Naasan and Afes in the Idlib countryside. HTS has been on alert for a few days, conducting military exercises and maneuvers."

Issa added, “The Syrian regime forces have resumed targeting civilians in the Idlib countryside in an indication of their intention to raise the pace of escalation in Idlib in the coming days and perhaps launch a military operation. Russia has also resumed escalation in Idlib, flying reconnaissance planes on a daily basis in Idlib's airspace. This also means further escalation is ahead. However, Turkish officers met with civilians in Idlib a few days ago and assures them that the area would be safe and that there would be no military action by the Syrian regime or Russia.”

Abdul Karim al-Omar, a journalist residing in Idlib, told Al-Monitor, “Each party to the conflict wants to show that it can protect and preserve its areas of control. At the Tehran summit, Turkey did not obtain the approval of Russia and Iran to launch a Turkish military operation against the Kurds. Field developments do not indicate an approaching battle between the regime, backed by Russia, and the FSA factions, backed by Turkey. It seems that Turkey has postponed its plans to attack the SDF.”

Hisham Esskeef, a member of the FSA’s public relations office and who resides in the northern countryside of Aleppo, told Al-Monitor, “After the Russians and Iranians violated the understandings and agreements related to the Astana Agreement and the cease-fire, anything is possible. After the crime of bombing children in the Idlib countryside, we cannot stand idly by and watch Russia and Iran massacre our people.”

Idlib-based journalist Muhannad Darwish told Al-Monitor, “The Russians want to show that they are still in a position of strength in Syria and that the Ukrainian war has not affected them. Meanwhile, the Turks also have their concerns in the north and northeastern Syria, and they are the ones who seek to shuffle the cards and advance against the SDF in northeastern Syria. Turkish statements before and after the Tehran summit were not the same, showing the contradicting views of the parties to the Astana process.”

He stressed that Idlib is constantly on alert, be it from HTS or FSA factions, but they have yet to decide on waging a battle.

Darwish noted, “I believe that the Turkish military operation against the SDF is inevitable. Many huge dossiers are pressing the Turkish leadership, such as the issue of the Syrian refugees and controlling the SDF areas, while Russia wants to show that it still has the last word in Syria and it can do whatever it wants. Meanwhile, Iran wants to show everyone that it will not stand idly if any military operation threatens its interests, and Turkey insists on sending Russia and Iran a message by carrying on with its plans against the SDF and possibly the regime forces if they decide to back the SDF.”