Increased military movements by government forces and Russia near the Idlib fronts and the strategic M4 highway indicate that the battle against the Turkey-supported opposition may be drawing near. 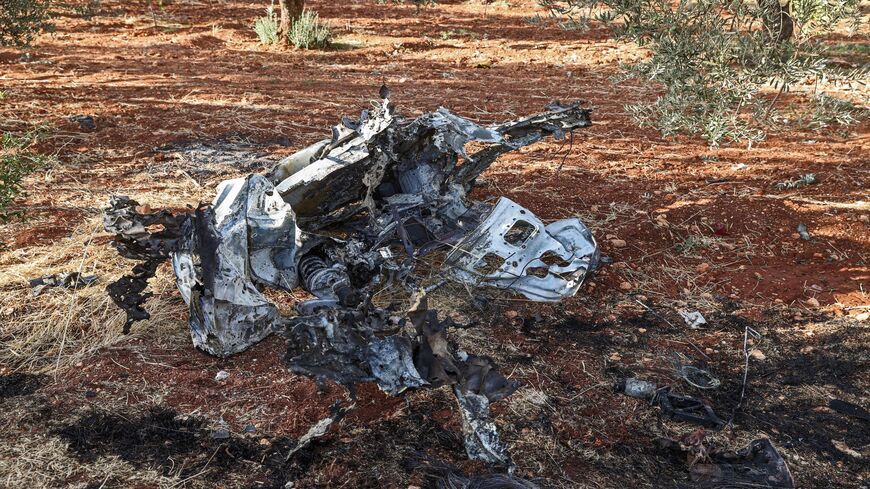 This picture taken on Sept. 20, 2021 shows a view of vehicle destroyed by what is believed to be a drone strike, on the northeastern outskirts of Syria's rebel-held northwestern city of Idlib. - OMAR HAJ KADOUR/AFP via Getty Images

ALEPPO — Since mid-September, the Syrian government has been leading a large-scale military operation against opposition factions to expel them from areas under their control south of the international M4 highway connecting Aleppo and Latakia.

The efforts are seemingly aimed at restoring commercial traffic on this vital road, which has become a priority as the government grapples with an economic crisis.

On Sept. 21, the Syrian newspaper Al-Watan, which is close to the Syrian government, quoted sources following up on the situation in Idlib, in northwest Syria, as saying, “The Syrian army and Russia have strong cards capable of forcing the [Turkish] regime of Recep Tayyip Erdogan to review the bad [decisions] its has taken to deescalate the situation.”

The sources said that “the circumstances are now appropriate to impose a comprehensive settlement in Idlib, at least in the area south of the M4 highway. Such a settlement would require the withdrawal of terrorists from it to its northern side and to a depth of six kilometers in preparation for opening it [the road]." The source criticized the Turkish government  for failing to secure Russian-Turkish joint patrols along the road and for not cracking down on terrorism in the area.

The Syrian government is seemingly awaiting the outcomes of the Sochi summit in late September, which will bring together Turkish President Recep Tayyip Erdogan and his Russian counterpart, Vladimir Putin. The government hopes that the summit will support its efforts to impose control over the M4 highway and expel the opposition from the Jabal al-Zawiya area in southern Idlib.

Omar Rahmon, a member of the National Reconciliation Center that is affiliated with the Syrian government and Russia, expects that the Erdogan-Putin meeting will pave the way for the government’s control of the M4 road.

In a tweet on Sept. 20, Rahmon said, “Erdogan’s visit to Russia may result in the exit of the Turkish occupation army from the entire south of the M4 highway, which connects Latakia with Aleppo, Hasakah and east of the Euphrates." Moving the Turkish occupation army out of the area, he said, "would be as easy as the dismantling of the observation points from the northern Hama countryside, southern and eastern Idlib countryside, and Aleppo countryside.”

In a series of other tweets, Rahmon advised civilians to evacuate the areas where government forces may advance during the current operation, and added that all indications show that the military campaign is approaching.

“The stakes of the regime and its allies launching a military campaign against Idlib are very high, and the battle the regime is leading may extend to a ground invasion," Mohammed Salem, a researcher at the Syrian Dialogue Center in Istanbul, told Al-Monitor. "Should the battle start before the Sochi summit, its goal will be to pressure Turkey to offer concessions." If the  summit's outcome benefits the regime, "then we may witness the launch of a broad battle with specific goals to at least control southern Idlib.”

Salem added, “Russia wants the Turkish army to withdraw from the south of the [M4] international road and the strategic Jabal al-Zawiya area. It also wants the M4 highway to be opened in order to alleviate the economic crisis the regime is going through. Russia is also calling for opening crossings between regime and opposition areas for the same purpose.”

Russia and Turkey agree on the need to discuss the de-escalation zone, Salem said, "but they disagree on the borders of this zone and on the presence of the government’s civil institutions.”

In a related context, Bloomberg News said Sept. 22 that Turkey has sent more troops to northwestern Syria, pointing to Turkey’s determination to prevent an assault on one of the Syrian war’s last frontlines in the areas controlled by the opposition factions.

In the same article, Bloomberg cited two Turkish officials who spoke on condition of anonymity as saying that thousands of additional soldiers will help deter any attempted advances by Syrian ground forces on Idlib and control roads leading to the Turkish border.

“There are many indications that the regime is preparing for a new military campaign," a military official in the Turkish-backed Free Syrian Army in Idlib told Al-Monitor. In conjunction with the military escalation, reinforcements have been deployed in the south of Idlib over the past week. "Also, the Hama Military Airport has witnessed an increase in aircraft sorties, especially Russian cargo planes between the airport and the Russian Hmeimim base on the Syrian coast,” which Russia used as a command center during previous battles.

However, Saleh al-Abdallah, director of the local Baladi website in Idlib, told Al-Monitor, “Field monitoring shows no serious movements on the part of the regime forces that can be considered as a prelude to a new battle in Idlib, and the current movements are part of the routine military deployments." He said the recent activity is "part of pressure on Turkey and the opposition to achieve political and perhaps military gains.”

“In the event of further escalation in the coming period, then this may be followed by the signing of a new agreement between Russia and Turkey, meaning that Russia and the regime could control new areas. This is a relatively remote possibility given the coherent Turkish position,” he said.

“I believe that Turkey will work to prevent any advances by the regime and Russia to protect its image. Any retreat shall be deemed as a defeat for the Turkish army, which will lose both its prestige and the opposition’s confidence if it retreats or allows the regime’s forces to bypass its military points again, as happened during the 2019 military operations until the beginning of 2020,” Abdallah added. The Turkish fortifications, especially the Jabal al-Zawiya area, "currently constitute an iron wall that the regime cannot easily overcome. Also, the opposition factions have redeployed and are ready for confrontation.”