Who benefits from attacks on Turkish forces in Idlib?

Repeated attacks on Turkish posts and soldiers in Idlib are obstructing Turkish efforts to reopen the M4 international highway and cement the cease-fire, raising questions about the parties behind the attacks. 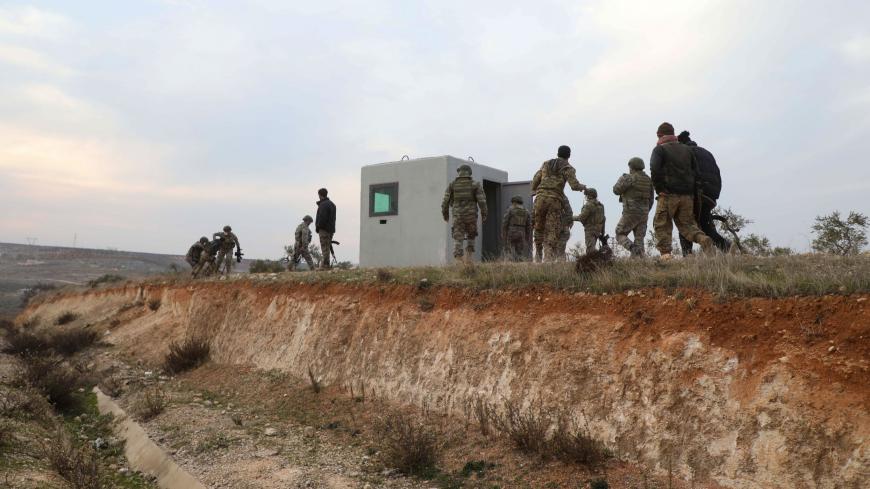 A concrete box placed by the Turkish army for use as a guard point is inspected by soldiers next to the M4 highway near the town of Ariha in Syria's rebel-held northwestern Idlib province on Jan. 4, 2021.

ALEPPO, Syria — The Turkish Defense Ministry recently announced the killing of a sergeant in an attack waged by unknown men Jan. 31 in Syria’s northwestern province of Idlib. The ministry tweeted Feb. 3 that Sgt. Basri Demirel of the Turkish city of Kayseri died in Hatay Hospital in southern Turkey, near the border with Syria, due to wounds he suffered in a terrorist attack on Turkish soldiers Jan. 31.

It was the latest in a series of such incidents. On Jan. 16, the little-known Ansar Abu Bakr al-Siddiq Brigade targeted a Turkish army post in Batabo town in Aleppo’s western countryside. On Sept. 6, 2020, the jihadi group shot Turkish soldiers in Maataram near Ariha in the south of Idlib, killing one Turkish soldier and wounding another. And on Aug. 27, 2020, the same group claimed responsibility for a car bomb attack near a Turkish post in the Jisr al-Shughur area in Idlib’s western countryside.

The little-known Khattab al-Shishani Brigades targeted joint Turkish-Russian patrols on the Aleppo-Latakia M4 international highway three times. The first was on July 14, 2020, when a booby-trapped car targeted a joint Turkish-Russian patrol on the M4 road. On Aug. 17, 2020, the jihadis claimed responsibility for targeting a vehicle from the patrol with a rocket-propelled grenade and on Aug. 25, 2020, a joint patrol on the M4 highway was also targeted by the group.

Meanwhile, Hayat Tahrir al-Sham has been mobilizing since early February its security forces across Idlib to dismantle any suspected cells. For their part, the factions affiliated with the Free Syrian Army (FSA) tightened their security measures by increasing inspections at the checkpoints and monitoring the roads where Turkish army convoys pass through near the Turkish military posts and bases. The FSA factions also set up a security perimeter on both sides of the M4 highway.

Questions arise as to who is benefiting from the attacks on Turkish soldiers in Idlib and whether the jihadi groups that have claimed responsibility for these attacks are actually responsible. Are those claiming credit real formations or mere facades for various parties? Accusations are mainly directed at the Syrian regime of being behind these attacks, as it is one of the main parties opposing the Turkish presence in Idlib. But others accuse al-Qaeda-affiliated Hurras al-Din (Guardians of Religion Organization), which has been under a tight siege led by Hayat Tahrir al-Sham. Hurras al-Din believes Hayat Tahrir al-Sham is an ally of Turkey. Meanwhile, the Islamic State could also be responsible for the attacks against Turkish presence in Idlib, since the organization considers the Turkish regime to be an apostate that must be fought.

Firas Faham, a researcher at the Jusoor Studies Center based in Turkey, told Al-Monitor, “So far, the jihadi groups that claimed responsibility for the attacks on Turkish bases in Idlib, such as Ansar Abu Bakr al-Siddiq Brigade and Khattab al-Shishani Brigades, have not been identified. None of their members have been arrested either. They might just be fake names for non-jihadi cells and groups working for several parties.”

Faham said, “It is in the interest of the Syrian regime for the Turkish army to be targeted in Idlib. The regime isn’t comfortable with the Turkish military moves and deployment in Idlib, as this has halted the military operations of the regime and its allies and prevented them from spreading their control in Idlib. The regime considers Turkey an enemy in Idlib but cannot openly attack its military presence because it cannot afford a Turkish response. We can [assume] that the regime is responsible for many of the attacks against Turks in the area through its affiliated security cells and groups, which it controls from afar.”

Faham added, “Hurras al-Din might also be implicated in the operations against the Turkish army in Idlib because it considers them foreign forces targeting the jihadi mission in Syria. The organization blames Turkey for the campaign that Hayat Tahrir al-Sham launched against its [Hurras al-Din’s] presence in Idlib and believes that Turkey paid for and supported this campaign to eliminate the organization from Idlib in the coming months. Hurras al-Din’s [possible] targeting of Turkish bases and soldiers in Idlib might be an act of retaliation.”

Al-Farook Abu Bakr, the deputy leader of the Al-Motassem Brigade, which is affiliated with the Free Syrian Army (FSA), told Al-Monitor, “[Bashar] al-Assad’s regime is the first culprit in the attacks on the Turkish army in Idlib. It employs its agents and groups using pseudonyms that have a jihadi meaning to remove any suspicion.”

Mostafa Bakkour, a military analyst who lives in Idlib, told Al-Monitor, “The escalating attacks on Turkish soldiers and positions in Idlib were triggered by the Turkish army’s continuous establishment of lines of defense and deployment of many military posts in Jabal al-Zawiya to the south of the M4 highway, in partnership with the FSA factions. The Turkish army is close to securing the area and implementing all understandings with Russia, which will prevent any possible military attack by the regime in Idlib and will cement the cease-fire [reached in March 2020]. The regime and [its allied] Iranian militias do not like these prospects, because they want to continue with their military operations and control Idlib fully, then force Turkey to retreat.”

Mohmad Rasheed, a journalist who works with the Hama Media Office, told Al-Monitor, “It is unlikely that the Islamic State is involved in the attacks on Turkish soldiers and military bases in Idlib. The Islamic State is currently focusing its enmity on Hayat Tahrir al-Sham, which it considers its primary foe and is targeting through cells and security members.”

On Feb. 11, Turkish and Russian forces conducted joint military exercises in Saraqib in eastern Idlib, according to the Russian Zvezda TV channel, affiliated with the Russian Defense Ministry. The channel released a video showing Turkish and Russian forces communicating via radio ahead of the drills. This may pave the way for the return of coordination between Russia and Turkey, which could eventually lead to the reopening of the M4 highway to allow joint Turkish-Russian convoys to resume their patrols on the road. The Syrian regime seems to reject these Russian-Turkish moves since they will lead to the implementation of the Sochi agreement, and thus prevent it [the regime] from launching its offensive in Idlib. This may explain the regime’s interest in creating chaos and destabilizing the Turkish army in Idlib.

The General Security Service in Idlib, which is associated with Hayat Tahrir al-Sham, said Jan. 31 that it killed Abu Dajana al-Daghestani, who is a member of the Islamic State in al-Dana in north Idlib.