Who is behind recent attacks against Turkish presence in Idlib?

Unknown parties have carried out several operations against some of the Turkish army outposts in Idlib, with some accusing Hayat Tahrir al-Sham and others pointing the finger at Islamic State or regime cells. 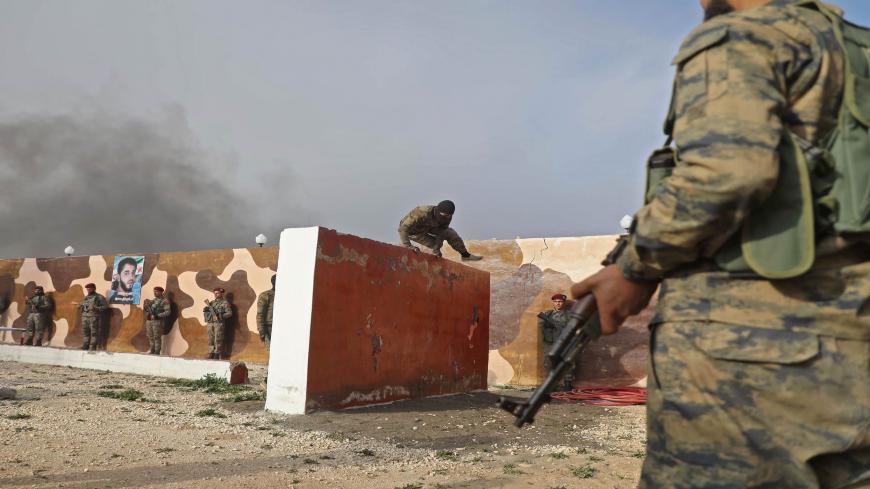 IDLIB, Syria — A group that goes by the name Ansar Abu Bakr al-Siddiq Brigade claimed responsibility for an attack on a Turkish army post in the western countryside of Aleppo on Jan. 16.

The group published a statement on social media, saying that it had targeted, with thermal snipers, one of the “main Turkish army bases” stationed in the village of Batbu, in western Aleppo, on the evening of Jan. 16. According to the statement, three Turkish soldiers were injured in the operation.

The group had first emerged in September 2020 and identified itself as independent and not affiliated with any faction or organization. It claimed responsibility at the time for an attack on a military post of the Turkish army in the village of Salat al-Zohour in the countryside of Jisr al-Shughur in the northwestern countryside of Idlib.

The Syrian Observatory for Human Rights (SOHR) said that on Jan. 3, an explosion near the city of Maarat Misrin took place where rocket-propelled grenades were fired by unknown persons at a Turkish vehicle while it was passing by the village of Kafraya, in northern Idlib, without information about casualties, noting that the security forces of the Syrian opposition factions and the Turkish forces cordoned off the area.

The SOHR report continued that another incident took place “on Dec. 7, 2020, when two members of the Islamic Sham Legion who worked as guards at the Turkish base in the town of Ram Hamdan, north of Idlib city, were injured, along with a Turkish soldier, after the base was targeted by unknown persons with a guided missile.”

Abbas Sharifeh, a researcher on jihadist groups who lives between Turkey and the northern countryside of Aleppo, told Al-Monitor, “I think there are three possible parties behind the targeting of the Turkish army in Idlib, including the Hurras al-Din cells affiliated with al-Qaeda, the cells affiliated with the regime and Iran, and those affiliated with the Islamic State [IS]. The Syrian regime believes that it is its patriotic duty to create hubs of popular resistance to confront what it describes as the ‘Turkish occupation,’ and since it is unable to confront Turkey directly, it resorts to these methods in order to disturb the Turkish presence and show the Turks that their withdrawal from Idlib and handing it over to the regime is the only way to guarantee the safety of their soldiers.”

Military and strategic analyst Brig. Gen. Ahmed Rahhal, who is also a former leader of the Free Syrian Army, currently residing in Turkey, told Al-Monitor, “There is more than one party that wants to obstruct the Turkish efforts in Idlib, on top of which is the Syrian regime, which seeks to eliminate the Turkish forces to pave the way for its offensive in Idlib. Among the most important parties that also have an interest in attacking the Turkish presence are the groups close to al-Qaeda, as they consider that the Russian-Turkish understanding on Idlib and the cease-fire agreement reached in Moscow on March 5, 2020, may end up eliminating them.”

He added, “Hayat Tahrir al-Sham [HTS] is not pleased with the understanding [cease-fire] that has been reached between Russia and Turkey, but it is forced to submit to it. HTS has two options: either a military confrontation with Turkey or submission to Turkey's policy and its understandings with Russia regarding Idlib. Meanwhile, Turkey does not want to clash with HTS.”

Rahhal noted, “HTS is trying to appear moderate and close to Turkey, but it may be the one behind those operations in order to show Turkey that it pulls all the strings of the game in Idlib. The operations targeting Turkish forces will not stop in the future, but rather escalate.”

A jihadist leader nicknamed Abu Hafs al-Shami who resides in Idlib told Al-Monitor, “Although many believe that the entities targeting the Turkish army may be groups affiliated with or linked to Hurras al-Din, these are mere speculations. These operations are more likely carried out by IS cells, those affiliated with either Russia or Iran, or both, and independent cells of unknown affiliation. The latter is more likely to be behind such operations.”

He added, “All of these possibilities are based on the different methods used during these operations. The attacks on the Turkish army on the M4 highway and targeting it in other locations such as the Jan. 16 attack all seem to have different objectives in terms of damage. However, in terms of the real goal, they all revolve around destabilizing the Turkish forces. As for the goals behind targeting Turkish soldiers in Idlib, they are either ideological — as is the case with jihadist groups — or political, serving the Russian interest.”

Shami noted, “Russia has not achieved real benefit from those operations that targeted the patrols on the M4 highway, except that it seemed to use this to prove that Idlib has terrorist groups and that the area is insecure and political progress is not possible in light of threats beyond Turkish control. Russia showcases all of this before the international opinion to continue with its policy of fighting all factions opposed to its ally Bashar al-Assad — be it moderate or hard-line factions.”

He stressed that HTS does not want the Turkish army to be targeted in order to show that it managed to control the area and succeeded in providing a solid security model capable of making it the only force that can be relied upon in any possible international agreement on Idlib.

Shami pointed out that if those operations against the Turkish army were to continue or escalate, HTS would be harmed, as this would mean that it was unable to control the cells targeting the Turkish army, and this harms the image of a strong, organized entity that it is trying to convey.