Turkish forces continue to expand their presence around the key M4 highway in Idlib as attacks by new groups fuel uncertainties in the rebel-held region. 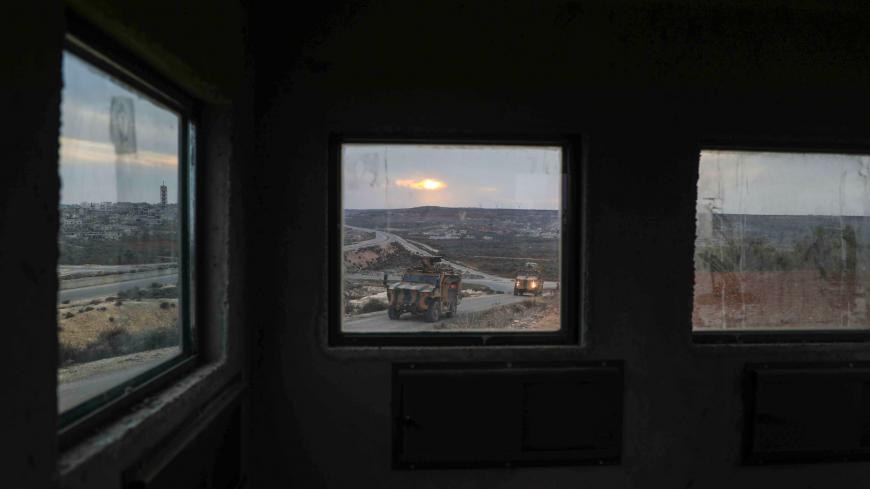 A concrete box placed by the Turkish army for use as a guard point is pictured overlooking the M4 highway near the town of Ariha in Syria's rebel-held northwestern Idlib province on Jan. 4, 2021. - AAREF WATAD/AFP via Getty Images

Obscure jihadist groups have stepped up attacks on Turkish forces in Syria’s rebel-held province of Idlib, adding to Turkey’s dilemmas amid the fragile status quo in the region.

Al-Qaeda-inspired groups such as Hurras al-Din stood out as potential troublemakers when Turkish forces began to reinforce their presence around the key M4 highway last year, coordinating with Hayat Tahrir al-Sham (HTS), the dominant rebel group in Idlib. Caucasian fighters, concentrated in Jisr al-Shughur and the Latakia countryside, were not seen as an immediate threat, though they share the jihadi ideology.

The attacks on the Turkish forces, however, have come from unexpected assailants.

A group calling itself the Khattab al-Shishani Brigade claimed the first three attacks, which targeted Turkish-Russian patrols along the M4 on July 14, July 17 and Aug. 25. “Shishani” means “Chechen” in Arabic and has become the hallmark of Chechen-led groups in Syria. After the July 14 car bomb attack, Russia said three of its soldiers were injured, while Turkey spoke only of damage to vehicles. A statement from the assailants, meanwhile, slammed the major jihadi groups in the region for inaction against the Turkish-Russian patrols. It contained quotes from al-Qaeda founder Osama bin Laden and referred to Russian soldiers as “crusaders” and Turkish forces and HTS as “apostates.”

Then, on Aug. 27, a group called the Ansar Abu Bakr Al-Siddiq Squadron claimed a car bomb attack near a Turkish observation post near Jisr al-Shughur, lauding the suicide bomber who drove the vehicle. A second attack by the same group killed a Turkish soldier and wounded another near Ariha Sept. 6. The most recent attack claimed by the group targeted a Turkish outpost in the western Aleppo countryside Jan. 16. Its statement said a “sniper detachment” attacked “one of the main bases of the Turkish NATO army,” while local reports said three soldiers were injured.

An equally obscure third faction, calling itself the Abdullah bin Unais Group, rained rocket-propelled grenades on Turkish forces Jan. 4-5 before attacking an HTS checkpoint Jan. 8. In its first ever statement, the group called HTS “apostate” and accused it of betraying Islam and the jihadi struggle against invaders.

The almost identical jargon of the three groups might suggest they are linked to a common center, but given their shared al-Qaeda ideology, the similarities in rhetoric are hardly unusual.

A number of radical factions in Idlib had openly objected to the Turkish-Russian patrols, initiated under a bilateral deal in March 2020, but they have kept quiet as the three aforementioned groups — all unheard of before — mounted their attacks. This brings to mind three possibilities. First, the new groups might be comprised of jihadists who defected from factions reluctant to confront Turkey. Such schisms have become commonplace in the Syrian war, but it is too early to conclude that those groups are really splinters acting independently. Second, the new names might be simply fronts for radical factions unwilling to openly antagonize Turkey. Finally, they might be a cover for Islamic State cells wary of brandishing their own flag in a region where they have made too many enemies.

Various Salafi jihadis — with or without links to IS — have advocated jihad against Turkey as part of internal debates, referring to Turkey as an “infidel” state and its government as unIslamic.

For groups bearing the “Shishani” tag, the war in Syria is not only about fighting “infidels” but also about score settling with Russia over a lost war in Chechnya. Turkey, however, has not faced any open enmity from the Chechens. They continue to see Turkey as a safe haven, despite Ankara’s rapprochement with Moscow and a series of assassinations of Chechen exiles in Turkey, blamed on Russian intelligence or hit men from Chechnya’s pro-Russian leader.

After the eruption of the Syrian war, Turkish intelligence dragged many Chechens along to Syria, where they earned a reputation as tough fighters. Despite their shift to jihadism, the Chechens have continued to set Turkey apart, never openly calling it an enemy. No doubt their attitude has had a pragmatic aspect, as many Chechens take refuge in Turkey or use it as a route from the Caucasus to Europe. The same goes for Uzbek, Kyrgyz and Uighur fighters in Syria.

For the jihadi groups in Idlib, Syrian government control of the M4 highway, which connects Latakia and Aleppo, would mean the end of the game. Jisr al-Shughur, the main base of foreign jihadis, lies on M4 as well. The Turkish-Russian patrols, which aim to reopen the road to traffic, caused a rift in jihadi ranks from the very outset. For those bent on resistance, opposing the patrols became synonymous with challenging the dominance of HTS, which chose to accommodate Turkey.

HTS had opted to collaborate with Turkey earlier — on the establishment of Turkish military observation posts. It had already triggered rows in jihadi ranks that erupted into armed clashes after Syrian forces took control of the M5 highway in February 2020 and Turkey and Russia agreed on joint patrols to reopen M4 the following month. The clashes saw HTS dismantle a joint operation center created by Hurras al-Din and four other al-Qaeda-inspired outfits in June.

The increasing attacks on the Turkish-Russian patrols amount to increased pressure on HTS, which claims to be the boss of the region. HTS' failure to rein in the attacks would change the rules of the game.

Following the attacks in early January, the Turkish forces set up a new checkpoint near Maarat Misrin and deployed vehicles equipped with explosive-detection systems on the M4. Continued assaults could force Turkey to take on the attacking groups, either directly or through its Syrian proxies.

Thus far, Turkey has done its best to avoid clashes with the jihadis, despite its commitment to uproot terrorist groups in two separate deals with Russia. It has maintained coordination with HTS and treated it as a “reasonable” group, although HTS remains on the list of terrorist groups and controls 90% of Idlib. By suppressing rival jihadi factions, HTS has served Turkey’s interests. To demonstrate rapport with Turkey, the group even agreed to the circulation of Turkish liras in Idlib last summer.

Turkey’s expanding military presence through dozens of checkpoints is, of course, a threat to HTS’ territorial control in the region, but at the same time, constitutes a barrier against Syrian and Russian forces, a vital upside for the group.

Turkey continues to reinforce its presence around the M4, though it has evacuated all its observation posts along the M5 after they were surrounded by Syrian forces. On Jan. 18, Turkish forces deployed to the town of Qastun in the al-Ghab Plain, which forms the line of fire between Idlib and Hama. Several days earlier, they set up two checkpoints near Saraqib.

The deterrence that Turkey’s military posture creates is dictating pragmatism on HTS. Accordingly, it feels compelled to rein in the attacks of radical groups, which threaten to disrupt the status quo. Still, such a strategy is not a guarantee of calm. Mutual salvos have never ceased since the cease-fire took effect last March. Moreover, continued attacks from Idlib on government-held areas could easily give Russia a pretext to squeeze Turkey and escalate operations in the region.