Hayat Tahrir al-Sham, the rebel group dominating Idlib, is turning up pressure on radical jihadis, facing accusations of acting at the behest of Turkey. 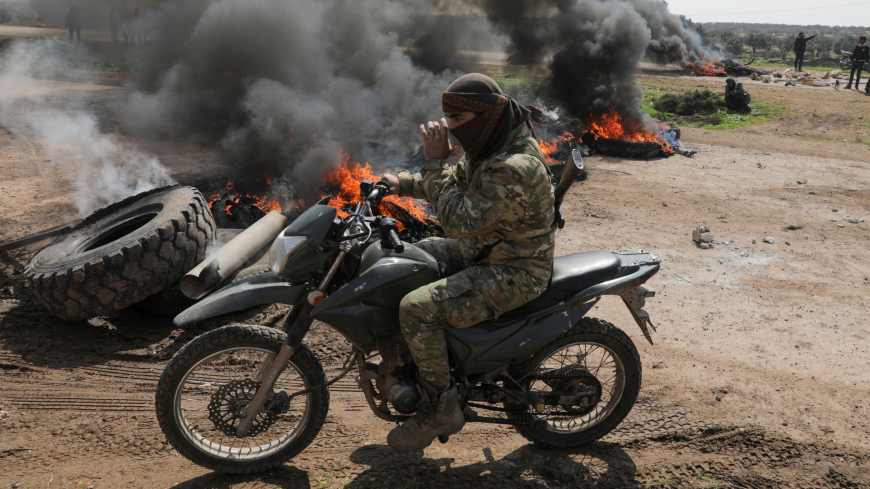 A Turkey-backed Syrian rebel fighter rides on a motorbike near burning tires during a protest against the agreement on joint Russian and Turkish patrols, at the M4 highway in Idlib province, Syria, March 15, 2020. - REUTERS/Khalil Ashawi

Since its March 5 deal with Russia on Syria’s rebel-held province of Idlib, Turkey has remarkably increased its military presence in the region, while its plans to force radical groups to toe the line have given rise to some intriguing developments in jihadi ranks. Hayat Tahrir al-Sham, the group dominating Idlib, has adopted a conciliatory attitude toward Turkey after initial resistance to the reopening of the M4 highway, while a diehard radical camp sticks to its menacing posture.

In its latest show of pragmatist rapport with Turkey, Hayat Tahrir al-Sham allowed the Turkish lira to circulate in Idlib as an alternative to the embattled Syrian pound. The move was not without controversy, sparking criticism of indirect banking links with Hayat Tahrir al-Sham, which Turkey lists as a terrorist organization. Even more remarkably, however, Hayat Tahrir al-Sham has made moves to rein in or undermine the intransigent radicals in Idlib.

While the Astana, Sochi and Moscow deals on Idlib have all called for the elimination of all terrorist groups in the region, Turkey has treated Hayat Tahrir al-Sham differently in practice. Pro-government media and think tanks have even sought to portray the group as a moderate and reasonable interlocutor. In a sense, Ankara is inclined to treat any militia as reasonable, regardless of its ideology and links, as long as it doesn't mess with the Russian-Turkish deal or Turkish moves on the ground. Ankara's primary motive here is to avoid attracting jihadi wrath on Turkey. Accordingly, getting jihadis to force other jihadis to toe the line has been part of Turkey's strategy. And things on the ground have progressed favorably thus far.

The Hayat Tahrir al-Sham pragmatist wing has prevailed in the in-house rift that followed the Turkish-Russian deal, hammered out in Moscow in March, but those who remain bent on fighting have turned to alternative alliances. In mid-June, the al-Qaeda-inspired Hurras al-Din, Ansar al-Din, Tansiqiyat al-Jihad, Ansar al-Islam and Muqatileen al-Ansar formed a joint operations center, dubbed Fathbutou (Be Steadfast). Since then, Hayat Tahrir al-Sham has moved to undermine the new alliance, which not only challenges Hayat Tahrir al-Sham's authority by fanning divisions, but also provides a justification for Russia to resume military operations.

To press for the release of those arrested, the Fathbutou factions erected checkpoints on several roads. The tensions erupted into deadly clashes June 23. Mediators secured a deal June 25, providing for an end to the fighting and the removal of the checkpoints. Still, clashes flared up anew at Arab Said in western Idlib.

Meanwhile, two Hurras al-Din leaders perished in drone attacks, which the group blamed on the United States. The first strike on June 14, which according to The New York Times was carried out with an especially lethal Hellfire missile, killed Khaled al-Aruri, a Ramallah-born Jordanian who had helped Abu Musab al-Zarqawi in organizing al-Qaeda in Iraq before moving to Syria. A similar strike on June 24 killed Abu Adnan al-Homsi, who was in charge of logistics in Hurras al-Din. Aruri and other influential figures had quit Hayat Tahrir al-Sham after the group, known previously as Jabhat al-Nusra, rebranded itself and said it had split from al-Qaeda in 2017.

In comments earlier this year, Washington's envoy for Syria, James Jeffrey, seemed to advocate flexibility toward Hayat Tahrir al-Sham, highlighting the group’s claim of being “patriotic opposition fighters” and saying that it had not posed international terrorism threats, focusing on keeping its positions in Idlib. In light of those remarks, the targeted killings of Hurras al-Din leaders could be read as a US contribution that reinforces Hayat Tahrir al-Sham and alleviates Turkey’s burden.

In 2018, another rift over what radicals see as Hayat Tahrir al-Sham pliancy had prompted Hurras al-Din and three other factions to form the Rouse the Believers operations room under the leadership of a former Hayat Tahrir al-Sham commander. The coalition rejected the Moscow deal, calling it “a venomous snake that keeps biting the hands of the Syrian people.” Now those groups have been joined by Tansiqiyat al-Jihad and Muqatileen al-Ansar, created in recent months by Hayat Tahrir al-Sham defectors. The radicals hold sway mainly in the areas of the Zawiya Mount and the Ghab Plain between Idlib and Hama as well as Jisr al-Shughur and Latakia’s northeastern countryside.

Hayat Tahrir al-Sham is said to be under growing pressure from Turkey to prevent attempts to block the M4 road, slated as a route for Turkish-Russian patrols, and rein in radical factions. Its rivals have come to accuse Hayat Tahrir al-Sham of taking orders from foreign powers, chiefly Turkey.

Jihadi groups have always sparred with each other, but their rows are now attributed to steps taken under the Russian-Turkish deal. Hence, moves to redesign Idlib cannot be seen independently from the intentions and initiatives of Turkey, which has markedly increased its military and intelligence presence on the ground. Yet Hayat Tahrir al-Sham’s conciliatory attitude is turning the radical camp into a new center of attraction. And the resolve of radical factions is increasing the potential for confrontation.