Are there any partners for Turkey among radicals in Idlib?

The reopening of the M4 highway in Idlib remains a tall task for Turkey, which is grappling with how to remove jihadi groups from the area. 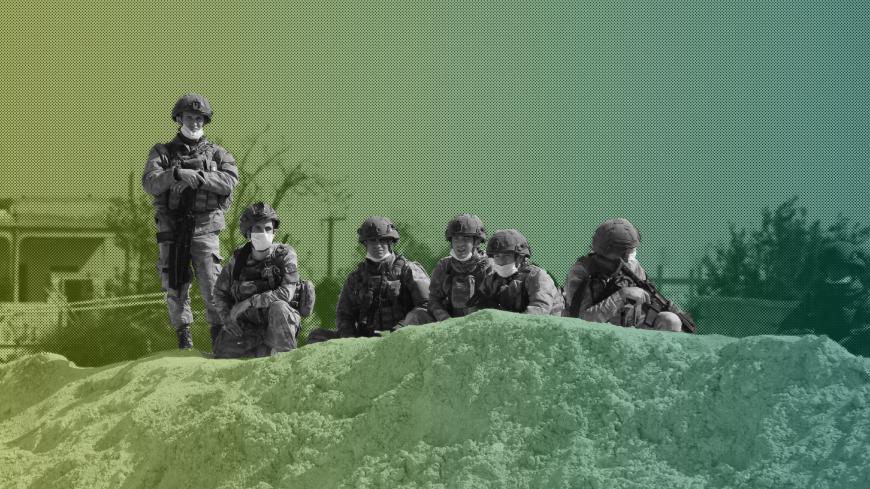 The latest Russian-Turkish deal on Syria’s Idlib province has opened rifts in the ranks of jihadi groups holding sway in the region amid a Turkish military buildup as part of efforts to reopen the key M4 highway.

The number of Turkish military posts in Idlib has exceeded 50 since the March 5 Moscow deal, which calls for the reopening of M4 and the establishment of a security corridor with a depth of six kilometers (nearly four miles) on either side of the road that links Latakia and Aleppo. Whether Turkey will fight the jihadi groups that reject the deal has been a key question for weeks. On March 19, a deadly rocket attack on Turkish forces was passed over with a brief statement by Ankara, which blamed the incident on “some radical groups” in the region.

Turkey’s approach thus far appears to favor negotiation, backed with military deterrence, over outright fighting as it seeks to compel Hayat Tahrir al-Sham (HTS), the dominant group in Idlib, into cooperation and intimidate other al-Qaeda-linked groups into toeing the line.

HTS has been ambiguous in its attitude thus far. Its pragmatic wing, made up mostly of Syrians, has sought to avoid unleashing Turkey’s military might on the group, but foreign members, who wield influence over the group’s ideological base, appear irked that HTS leader Abu Mohammad al-Golani is inclined to flexibility and pragmatism.

The internal rift, which began more than two years ago after HTS allowed Turkey to set up military observation posts in Idlib, has deepened since the Moscow deal, which also requires the elimination of groups that the UN has labeled as terrorists. HTS had already retreated from vast areas after the Syrian army regained control of the M5 highway linking Damascus and Aleppo in February.

Clearly, HTS has not accepted any deal between Russia and Turkey. Yet, while keeping up its fight against Syrian forces backed by Russia and Iran, the group has been trying to present itself as the most reasonable faction on the ground that Turkey could engage and collaborate with. Similarly, HTS has sought to convey a message to the West that it no longer has anything to do with al-Qaeda and global jihad and is focused on fighting the Syrian regime, hoping to be removed from the terrorism list. This message seems to resonate in certain quarters. Washington’s Syria envoy James Jeffrey, for instance, argues that HTS has not posed international terrorism threats and is focused on maintaining its positions in Idlib.

In a striking exposure of the rift, Abu Malek al-Tali, a prominent HTS figure critical of Golani’s efforts at rapport with Turkey, announced April 7 he was quitting the group because he was kept in the dark on its shifting policies and disapproved of the changing course. Bassam Sohyoni, the head of the Shura Council, the highest HTS body, announced his resignation the same day. Three days later, Golani managed to persuade Tali — both a senior commander and Shura Council member — to come back on board, though the latter was said to be irked by the pragmatic shift of the group.

Tali’s backpedaling, however, does not mean that the friction between the group’s hard-line and pragmatic wings is over. The rift is likely to grow as Idlib’s map of control changes down the road.

Defections could play into the hands of al-Qaeda-affiliated groups, raising the specter of a new jihadi front being opened against Turkish troops. Some groups seen as alternatives to HTS are already calling for resistance against Turkey.

Hurras al-Din, Ansar al-Din, Ansar al-Tawhid and Ansar al-Islam stand out among the factions that have rejected the Sochi and Moscow deals and assumed a menacing attitude toward Turkish-Russian patrols in Idlib. The four groups have joined forces in a coalition called Rouse the Believers Operation Room, which has slammed the Moscow deal as “a venomous snake that keeps biting the hands of the Syrian people.”

Separately, Hurras al-Din leader Abu Humam al-Shami has urged Syrians not to trust Turkey and Russia. Hurras al-Din was formed in 2018 by remnants of various al-Qaeda-inspired factions. The initiative was led by former leaders of Jabhat al-Nusra, the predecessor of HTS that opposed its split from al-Qaeda.

These factions hold sway in the Latakia countryside and northern Hama — that is, areas where the security corridor is planned to be. And while HTS controls up to 90% of Idlib, its power is similarly concentrated in areas along the M4 route. Areas along the border that Turkey would like to keep as a buffer zone are all in HTS hands as well. Unlike other factions, HTS could move to its own areas of control in the event of a retreat, which might be another reason behind its flexible demeanor.

Could an exodus of intransigent radicals from HTS make the group a smooth partner for Turkey and a reasonable interlocutor for Russia?

No matter how much HTS claims to have changed, the group will remain on the list of terrorist organizations unless the UN Security Council revises its decision. Its previous rebranding failed to bear fruit.

Discussions within the group, meanwhile, offer ample clues as to what extent HTS could change or be a partner to Turkey.

Abu al-Fath Yahya al-Farghali, a hard-line HTS figure, referred to the Turkish army as an “infidel” force in a leaked recording from a meeting in early February, when Turkey moved to stop the Syrian army’s advance along the M5. Farghali said HTS was able to impose conditions on Turkey in October 2017, when Turkey began setting up military posts in Idlib. Under the alleged conditions, HTS was to retain its military control and expel the Turkish forces if need be, while the Turks would not meddle in Idlib’s governance, including courts, and would not restrict the jihadi fighters.

HTS felt strong enough to reject Turkish deployment plans by mid-2019. The group lost its superiority as the Syrian army began to advance thereafter and Turkey began a unilateral build-up in the province.

According to Farghali, collaboration with “apostate” Turkey is justified by the notion of “recourse to the infidel against the infidel” that jihadist ideology permits in compelling circumstances.

The meeting at which Farghali spoke was probably held before the Saraqeb battle in late February in which HTS used Turkish-supplied armored vehicles and dozens of Turkish soldiers died.

In an April 1 statement after the recording was leaked in late March, Farghali referred to concerns of a “Turkish occupation,” asserting that HTS “would fight any occupation because we don’t expend our blood to replace one occupier with another.”

In 2017 and 2018, Turkey had made do with military observation posts, leaving the rebels in Idlib to their own devices. Now it pursues a different strategy akin to the one in Afrin, aimed at direct territorial control in collaboration with allied militias.

A full implementation of the Moscow deal would inevitably push HTS and other jihadis toward the Turkish border. This would mean a critical junction: The jihadis would either open a front against Turkey or temper themselves into “convenient” parties for Ankara. Or both options would transpire simultaneously amid divisions in the jihadi ranks.

While “moderating” armed groups remains a lingering chapter in the Syrian conflict, Golani’s interceding to bring Tali back is hardly a boost to hopes of moderating HTS by weeding out radicals. Despite varying tints and shades, such groups have proved to be strongly attached to their ideological mainstays. To surmise “moderation” just because they might be a bit more inclined to cooperation would be nothing but a deception.

Remarkably, Uighur, Uzbek and Chechen factions have kept mum in the debates on the jihadi camp. It might be a sign of caution as they probably see Turkey as their only safe haven should the Idlib front unravel. Still, making bets on those fighters, too, could always prove a curveball.