As Russia pressures Turkey to impose law and order in Syria at Idlib, Turkey in turn is pressuring radical factions there, which is escalating the conflict among jihadists. 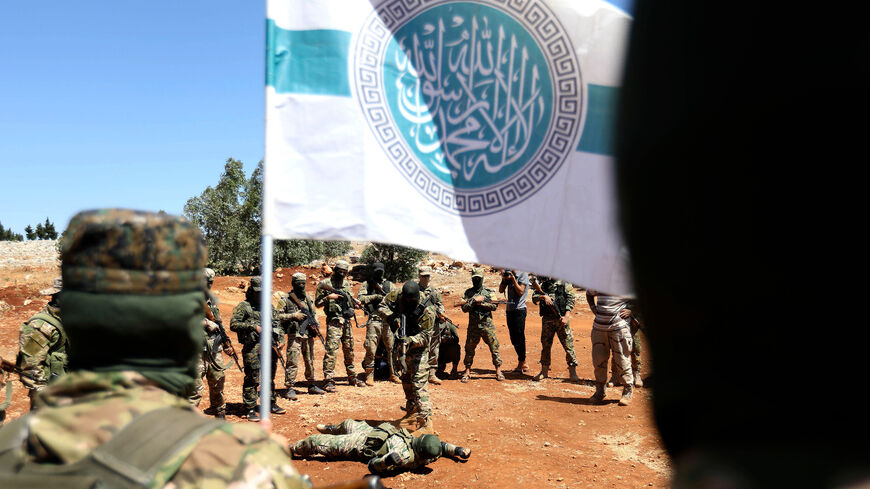 Syrian fighters participate in a mock battle in anticipation of an attack by the regime on Idlib province and the surrounding countryside, during a graduation of new Hayat Tahrir al-Sham members at a camp in northern Idlib, Syria, Aug. 14, 2018. - OMAR HAJ KADOUR/AFP/Getty Images

The Syrian city of Idlib is swimming in alphabet soup, as myriad rebel factions vie for dominance.

As the presidents of Russia, Turkey and Iran met Feb. 14 in Russia's resort city of Sochi to discuss their accord on Syria, other players were pursuing their own interests in Idlib.

Russia, relying on the Sochi accord, has squeezed Turkey into a corner at Idlib, pressuring Ankara for months to control or exile jihadist factions. Ankara in turn is pressuring the jihadists, who are split over how to avoid Turkey's wrath. Meanwhile, Turkey supports the moderate factions — but not everyone defines "moderate" the same way.

The Hayat Tahrir al-Sham (HTS) alliance, once linked to al-Qaeda, routed the Turkey-allied National Liberation Front (NLF) in clashes during the first days of January and imposed control over 90% of Idlib. HTS then adopted a more pragmatic attitude toward Turkey — one that didn't sit well with all of the group's factions.

HTS is determined to: avoid negative reaction from Turkey, which has set up 12 military observation posts in a supposed de-escalation zone around Idlib; fend off operational plans developed by Russia and the Syrian regime; and soothe the local population that doesn’t want HTS in their areas. But some influential HTS members see peace negotiations as a betrayal of the revolution.

Although HTS leaders didn't oppose Turkey placing observation posts around Idlib, they were uneasy with the Turkey-backed opposition groups adopting an anti-Kurdish agenda to please Turkey. HTS leader Abu Mohammad al-Golani, after installing the Syrian Salvation Government in the areas the group captured at Idlib, extended an olive branch to Turkey and the moderate rebel groups it supports. Golani first revealed HTS' support of Turkey’s military plans to advance on Kurds east of the Euphrates River. He then began a purge of the radical wing of his organization that caused a split with influential member Abu Yaqzan al-Masri. Golani also banned the issuing of fatwas (religious decrees) by any source other than the group's general council.

Abu Yaqzan had come to Syria in 2013 and joined Ahrar al-Sham, later transferring to Jabhat al-Nusra, the forerunner of HTS. He is known for his anti-Turkish fatwas and opposed the Turkish operation slated for east of the Euphrates, saying Islam has no place in a war between a secular army (the Turkish Armed Forces, TSK) and an atheist party (the Kurdish People’s Protection Units, YPG).

There could soon be other splits from HTS. Abu Malik al-Tali, a Lebanese commander of Jabhat al-Nusra/HTS at the Qalamoun front in the summer of 2017, is named among those likely to leave.

"Their plan was to disrupt the peaceful atmosphere at Idlib, to unravel the Sochi accord and to divert Turkey’s attention from east of the Euphrates to the west — that is, from Manbij to Idlib," Yeni Safak reported.

Turkish Foreign Minister Mevlut Cavusoglu supported this scenario, without giving names, telling the media: “Some Western countries … are provoking the HTS to destroy the Idlib accord, giving them money and support.”

Stress within HTS had begun escalating about a year ago as HTS sought to soothe Turkey and rid itself of the terrorist label. As tensions grew, some of the more radical members split to form Tanzim Huras al-Din (Religious Guardians' Organization). The groups met Jan. 31 for possible joint action in Idlib, but were unable to reach an agreement.

Abu Humam al-Shami, general commander of Tanzim Huras al-Din, and Sami al-Ureydi, the organization’s judicial leader, exposed this bargaining between the two organizations. Accordingly, HTS asked Failaq al-Sham (a Turkey-backed rebel alliance) to leave the movement and join a common military council to be led by a former Free Syrian Army commander. HTS also said there should not be opposition to the regime force’s use of the Aleppo-Damascus highway. Tanzim Huras al-Din officials, however, rejected these requests, asked HTS to return the heavy weapons they had captured and declared, “It is time for general mobilization of regional forces to wreck the regime’s power.”

Tanzim Huras al-Din was particularly strong in fighting the regime and moderate rebel factions in northwest Hama, northern rural areas of Latakia and south of Idlib. Another claim was, if it had agreed to a joint military council, Failaq al-Sham would have been in charge of political affairs while HTS would be leading military affairs.

While HTS and the NLF couldn’t agree, they nevertheless reached an understanding that would fend off clashes. Accordingly, HTS will provide safe zones to Tanzim Huras al-Din in return for the latter not building secret shelters and not openly commenting on HTS political and religious statements.

HTS appeared to be opting for such cooperation because of its lack of adequate manpower and financial resources to impose control over areas it had captured. That might explain why HTS, which routed and disarmed Ahrar al-Sham and Shugur al-Sham, allowed them to resume their former operations a short time later.

For HTS, which controls the border crossings to Turkey, to become part of a ploy to anger Ankara could result in hard blows to HTS' financial resources and humanitarian assistance flows. Nevertheless, there have been cases where HTS has abandoned its pragmatism. For example, it handed over the areas it had captured west of Aleppo to the Syrian Salvation Government, but then intervened with the police organization Turkey had set up. It raided and seized 31 police stations, their equipment and vehicles.

For some time now, there have been reports that Turkey will combine the Syrian National Army and HTS, and thus preserve the status quo at Idlib. If this goal is reached, next in line would be the purge of foreign Uighur, Uzbek, Arab and Caucasian fighters from HTS ranks. In the latest tension among the jihadists, foreign outfits that usually try to maintain good relations with Turkey took positions supporting the HTS. The Turkistan Islamic Party of the Uighurs, the Tawhid and Jihad Brigade of the Uzbeks, and the Chechen-led Jaish al-Muhajireen wal-Ansar (JMA, the Army of Emigrants and Supporters) issued a joint declaration of being in the HTS ranks.

Just as arguments were raging on how to purge foreign fighters, Russian sources said about 1,500 fighters from the West, Asia and East Turkistan entered Syria via Turkey and deployed at HTS and Tanzim Huras al-Din camps.

In summary, while HTS prefers to hold on to the liberated territory, Tanzim Huras al-Din wants to expand its fight against the regime. Organizations affiliated with al-Qaeda that find HTS too reconciliatory — such as Jaish al-Melahim, Jaish al-Sahil, Jaish al-Badiya, Saraya al-Kabil, Jund al-Sharia and some minor Jund al-Aqsa cells — formed Tanzim Huras al-Din with the goal of attacking the Syrian regime army, rendering the Sochi accord meaningless and further complicating the Idlib issue.

It's hard to predict how Golani’s latest initiative will change the story in Idlib, but it's certain that further splits of some radical wings from HTS will strengthen Tanzim Huras al-Din. The Islamic State also can expand its cells with segments splitting from HTS. For the past two years, when Turkey couldn't fully control HTS, it tried splitting it into smaller units. HTS could again find common ground with Turkey-supported groups. Russia constantly reminds Turkey that there are deviations from their road map for Idlib and their obligations over the Sochi accord.

An Idlib operation is waiting for the United States to complete its Syria withdrawal. If the United States withdraws before the end of April, an Idlib operation will be seriously on the table. Even if HTS is included in the Turkey-guided Syrian National Army (formed from factions of the Free Syrian Army) as discussed, Russia will stick to the option used in eastern Aleppo, eastern Ghouta, Daraa and Quneitra: Factions will hand over their weapons and allow the Syrian regime army to return.