Idlib’s rebels on alert against infiltration by Islamic State

The armed groups controlling Idlib remain wary of the prospect of Islamic State militants sneaking into the region, following reports that IS members are seeking safe passage to the province. 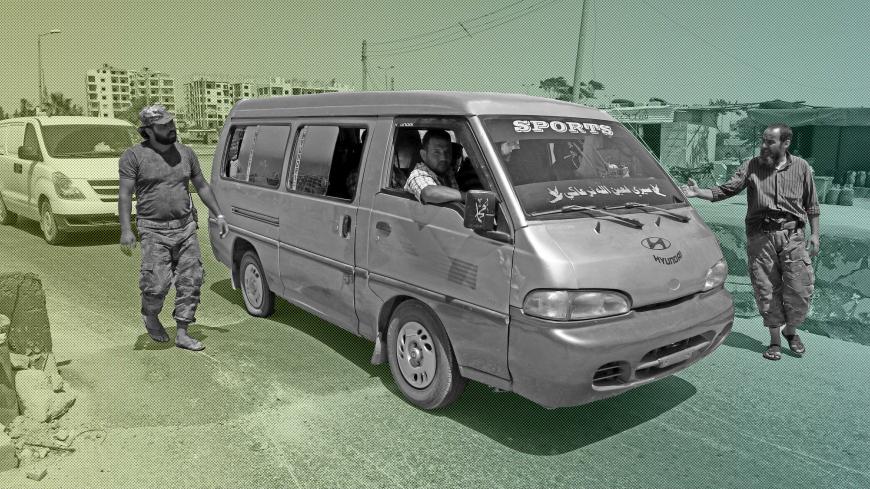 Members of a coalition of rebel groups man a checkpoint in Idlib, Syria, July 18, 2017. - REUTERS/Ammar Abdullah

Idlib, Syria, is once again in the spotlight following reports that the Islamic State (IS), beset by the Kurdish-led Syrian Democratic Forces (SDF) in Baghouz in eastern Syria, is seeking passage to the jihadi-held province in the northwest.

An SDF commander in Deir ez-Zor, commenting on the siege on Baghouz, told Russia’s Sputnik, “[IS], which is against the wall, asked to go to Idlib and toward the Turkish border. We rejected this request.” Agence France-Presse also reported Feb. 18 that IS fighters sought safe passage to Idlib but had been turned down.

The Associated Press reported Feb. 23 that 300 IS fighters are thought to be trapped there. However, an SDF commander told Kurdistan 24 news there could be "maybe more than 1,000" fighters still there, plus their families. The SDF said tens of thousands of civilians have been evacuated, many to camps for displaced persons.

When it comes to fighters who have surrendered or have been captured, the SDF expects their countries to take them.

Besides Idlib, two regions stand out as potential safe passage options for IS — the Badia desert in eastern Syria, where the group is still active, and Iraq’s border province of Anbar, where the militants can blend in easily with locals. The IS fighters in Baghouz are predominantly Iraqis, so they are expected to prefer Anbar, while Syrians are likely to head to Badia. Those who want to leave the region via Turkey, meanwhile, are eyeing Idlib as their ultimate destination.

Before discussing whether IS could find refuge in Idlib, it is worth overviewing the jihadi groups dominating that province and the rifts between them. The factions, which sprang from al-Qaeda tradition and split up for various reasons, can be divided into five main categories:

The relationship of the groups in Idlib has always been a spiral of alliances and clashes. The factions that captured Idlib as part of a rebel coalition called the Army of Conquest have again turned against each other under the impact of the peace negotiations. In 10 days in early January, HTS routed the Nureddin Zengi Brigade, proceeding to expand HTS' domination over Idlib and placing the entire region under the control of its civilian arm, the so-called Salvation Government. Then it made efforts to form a joint military council and weed out the most radical elements in a bid to avoid a confrontation with Turkey, deny Russia a pretext for an offensive and take a chance at getting off the list of terrorist organizations. But as those efforts proved futile, HTS was forced to reach a reconciliation deal with Tanzim Huras al-Din on Feb. 1, ending its feud with a group to which radical HTS defectors gravitated.

In the current state of affairs, the ability of IS to infiltrate jihadi groups in Idlib can't be ruled out completely. Yet because of old enmities and the problems IS could create, Idlib’s factions remain wary of IS fighters. In other words, IS is a problem common to the radical and pragmatic jihadis, and hard-line and moderate Salafists in Idlib.

After serious clashes in the past, the IS-HTS enmity continues today with assassinations and executions. Bomb attacks have been on the rise, especially in peripheral areas in southern and eastern Idlib province, which brings to mind the question of whether IS is coming back.

The perpetrators of the attacks aren't clearly known. They could be IS militants or rival forces at loggerheads in the region. HTS and NLF factions had traded accusations over a string of assassinations from February to April last year.

IS fighters have previously tried to sneak into Idlib and the Operation Euphrates Shield area (northern Syria) by mingling in with civilians. As the last IS holdout is falling, infiltration attempts could increase. To head off militants fleeing from Deir ez-Zor to Idlib, HTS has erected earthen barriers on several roads. The Turkish military has also taken fresh security precautions around Idlib in recent days.

HTS held IS responsible for the Jan. 29 suicide attack on the Salvation Government building in Idlib. On Feb. 11, HTS members raided an IS cell in al-Dana, clashing with armed members. Then on Feb. 18, twin bomb explosions ripped through Idlib city, claiming 25 lives, just as HTS leader Abu Mohammad al-Golani was to meet with representatives of other groups there. Some reports even claimed that Golani was injured in the head and taken to a hospital in Turkey. The HTS news agency, IBA, denied that Golani was wounded in the blasts, whose perpetrators remain unknown.

HTS has given no respite to Jund al-Aqsa, the IS offshoot, in the past, locking up dozens of its members. In February 2018, it released 50 Jund al-Aqsa prisoners as it clashed with NLF factions, but those militants had been arrested for attacks on rival groups. In September, HTS executed five IS militants captured in Khan Sheikhoun.

In sum, the factions holding Idlib are on alert against IS infiltration attempts, knowing that such infiltrations would make Idlib a more salient target and strengthen the hands of Russia and Iran as they keep Turkey under pressure in the region. Yet no place in Syria is completely immune to IS infiltrations, including regime-controlled areas. Hence, the scattered organization could make its presence felt in various places through assassinations and bomb attacks, just as it did Jan. 16 in Manbij.