Is HTS reining in or expanding jihadist network in Idlib?

Ansar al-Tawhid recently attacked a Russian operations room in the south of Idlib governate, killing and injuring several soldiers on the site, raising questions about the group’s identity and affiliations. 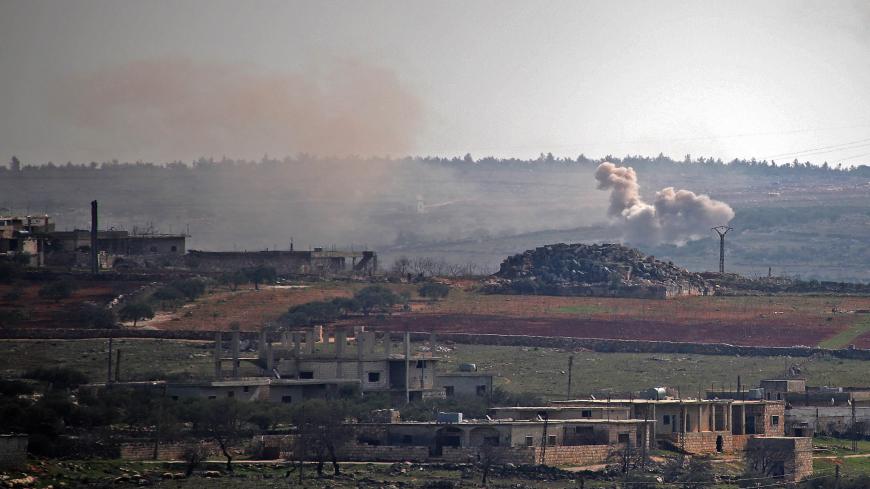 IDLIB, Syria — Ansar al-Tawhid, an insurgent group affiliated with al-Qaeda, claimed responsibility for bombing Feb. 7 an operations room of the Russian forces in the city of Kafr Nabl in the south of Syria's Idlib governate, which killed and injured several soldiers on the site, including a high-ranking Russian officer.

On Feb. 9, a video circulated on social media showing the group’s militants sniping at the Syrian government and Russian forces on Idlib’s fronts. This comes amid the recurrent targeting of the regime forces’ site with missiles recently.

Ansar al-Tawhid is one of the founders of the Rouse the Believers operations room, which was announced in mid-October 2018, and includes, in addition to Ansar al-Tahwid, al-Qaeda-affiliate Hurras al-Din; Ansar al-Din Front, which previously defected from Jabhat al-Nusra, currently Hayat Tahrir al-Sham (HTS); and Ansar al-Islam. The Rouse the Believers operations room has mainly focused its activities in the northern countryside of Latakia, all the way to the western countryside of Hama, and the Idlib fronts at that time. These jihadist groups within the operations room rejected the Sochi agreement reached between Turkey and Russia in September 2018, which provided for the establishment of a demilitarized zone between the regime-held and the opposition-held areas in Idlib.

On May 3, 2020, Ansar al-Tawhid announced its defection from the Rouse the Believers operations room, which at the time seemed to be a maneuver to avoid confrontation with HTS that was at odds and clashing with Hurras al-Din, one of the most fundamentalist groups in the operations room.

On June 26, HTS issued a decision prohibiting the formation of any operations room or the establishment of any armed faction outside Al-Fatah al-Mubin (Great Conquest) operations room that includes HTS and the Free Syrian Army (FSA) factions.

With this decision, HTS was trying to restrict jihadist groups and prevent them from carrying out any military action without its knowledge.

HTS, which has been tagged as a terrorist group by the United States and the UN Security Council for its links to al-Qaeda, has over the past year, likely in coordination with Turkey, sought to portray itself as a more moderate, Islamist, Syrian nationalist opposition group. The group's leader, Abu Mohammed al-Golani, even recently appeared in a snappy blue blazer in an interview with PBS reporter Martin Smith. The question is whether HTS is trying to rein in these newly, even more radical groups, or get control over their operations.

In this context, the latest movements by Ansar al-Tawhid raise many questions as to the emergence of this organization and whether or not it is coordinating its actions with HTS. Questions also arise on whether HTS is supporting jihadist groups in a bid to use them when needed.

Ansar al-Tawhid now includes members who were previously part of Jund al-Aqsa, which was established at the beginning of 2014 by Muhammad Yused al-Athamneh, aka Abu Abdul Aziz al-Qatari, a former al-Qaeda leader and one of the founders of Jabhat al-Nusra in Syria. His body was found in Deir Sunbul town in the countryside of Idlib in late 2014. The FSA’s Syria Revolutionaries Front was blamed. Jund al-Aqsa was one the most prominent Salafist-jihadist organization in the opposition-held areas in Idlib at that time and was close to Jabhat al-Nusra.

Jund al-Aqsa, however, abstained from engaging in an all-out war with the Islamic State (IS), announcing in October 2015 its defection from Jaish al-Fatah, an organization founded by Syrian Islamic factions on March 14, 2015, that had united in a joint operations room. Jaish al-Fatah’s first major battle was the battle of Idlib in October 2015. Jund al-Aqsa’s moves fueled the disagreement with Ahrar al-Sham and the conflict between the two sides continued through 2016. The dispute escalated into bloody fighting between the two sides, which ended with a mid-February 2017 agreement that provided for the exit of Jund al-Aqsa from the countryside of Hama and Idlib toward the city of Raqqa, which was under IS control back then.

The remnants of Jund al-Aqsa in Idlib announced in early March 2018 the establishment of a new group called Ansar al-Tawhid under the leadership of Abu Diab Sarmin.

On Aug. 31, 2019, the Ansar al-Tawhid headquarters in northern Idlib was bombed by the US-led international coalition against IS, causing heavy losses among its ranks.

Mohamad Rasheed, a journalist working with the Hama Media Office, told Al-Monitor, “The number of Ansar al-Tawhid members is over 700, and they are spread around Idlib countryside, most importantly in the Sarmin area and surrounding villages in the eastern countryside of Idlib.”

“Ansar al-Tawhid in its current form cannot be compared to Jund al-Aqsa, which the former was part of a few years back. Especially since the most fundamentalist and extremist members of Jund al-Aqsa — those who were close to IS — had left Idlib for Raqqa following the agreement with Ahrar al-Sham,” he said.

Rasheed added, “HTS is satisfied with Ansar al-Tawhid, which obeys the former’s order and does not carry out any military operation in Idlib without HTS’ knowledge. The group also agrees to HTS’ pragmatic politics and its reformist shifts. Most of the group’s members are locals and secretly supported by HTS. What’s more, Ansar al-Tawhid does not declare its allegiance to al-Qaeda and considers itself a local jihadist group.”

Mahmood Talha, a journalist with the Thiqa news agency in the western countryside of Aleppo, told Al-Monitor, “HTS is benefiting greatly from the presence of a jihadist group such as Ansar al-Tawhid and supports it for several reasons. Most importantly, Ansar al-Tawhid serves as the go-to group for fundamentalist members who defect from HTS at every turn. HTS could also use the group as a [combat] tool in the face of the Syrian regime as its members are highly trained. They can also be used in battles against the FSA factions, in case HTS seeks to undermine one of the rival factions in the FSA.”

HTS appears to be reining in all jihadist groups in Idlib in general, with the exception of Hurras al-Din. But what differentiates Ansar al-Tawhid is the fact that most of its members are Syrians, unlike other groups whose members are mostly foreigners, such as is the case with Jabhat Ansar al-Din, the Turkestan Islamic Party and Ansar al-Islam, among others. Controlling these extremist groups helps HTS present itself as a good leader capable of reining in jihadist groups and controlling security in Idlib. Thus it seems Ansat al-Tawhid’s Feb. 7 attack against Russian forces was carried out with the approval of HTS, which sought to respond to the recent escalation from the regime forces and their allies on the Idlib fronts.