When Hayat Tahrir al-Sham was first established, it taught its members the approach of prominent jihadist ideologue Abu Mohammad al-Maqdisi, but it has now severed ties with him and recanted his ideology. 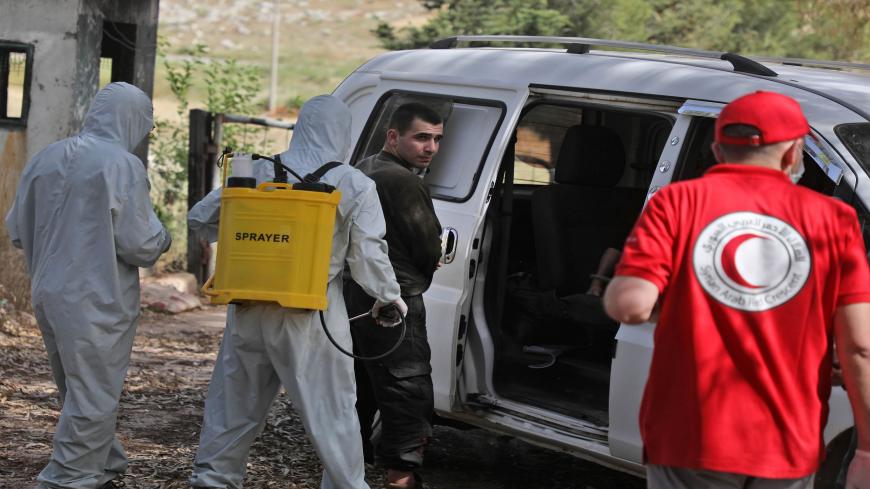 A fighter from Hayat Tahrir al-Sham is sprayed with decontamination liquid upon his release in a reported prisoner swap deal with regime forces in the town of Darret Ezza, about 30 kilometers (19 miles) northwest of Aleppo, Syria, May 16, 2020. - AAREF WATAD/AFP via Getty Images

IDLIB, Syria — Hayat Tahrir al-Sham (HTS), which is blacklisted as a terrorist organization by the United States, announced through its Sharia Council the disavowal of prominent jihadist ideologue Issam al-Barqawi, aka Abu Mohammad al-Maqdisi.

In a statement released Oct. 10, the HTS-affiliated Sharia Council said, “He [Maqdisi] is not one of us, and we do not follow his ways. We distinguish between his heretical notion of 'tawheed' [the oneness of God] and the notion we were taught by our predecessors and successors [scholars]. We disavow Barqawi’s ideology and behavior.”

Maqdasi said in a statement via his Telegram channel a few days ago, which was later removed, “We have been shown the injustices and grievances of the HTS members and their cooperation with Turkish intelligence in their investigation with Muslims. Those who abet Turkish intelligence against Muslims commit a contravention in Islam, showing their apostasy and deviation from religion, if they cooperate with Turkey.”

Relations between Maqdisi and HTS have been tense since the latter, formerly known as Jabhat al-Nusra, split from al-Qaeda in 2016 and announced the formation of Jabhat Fatah al-Sham. The split back then angered the more radical current within Jabhat al-Nusra, which in turn announced the formation of Hurras al-Din (Guardians of Religion), which is affiliated with al-Qaeda.

Maqdisi is a Jordanian Salafist jihadist of Palestinian origin. He has written several books on the teachings of Islam, which were taught across al-Qaeda camps in the region over the years. He was considered a close confidant to al-Qaeda founder Abu Musab Zarqawi in Iraq. He was imprisoned in Jordan on several occasions.

The latest attack by Maqdisi on the HTS security apparatus comes amid the ongoing crackdown against the remnants of Hurras al-Din and the arrest of its leaders. Maqdisi believes these steps were taken in coordination with international parties, including Turkey that he believes is collaborating with the United States.

Turkey-based Syrian researcher Mohammad Sarmini, director of Jusoor for Studies, a Syrian independent institution based in Turkey, told Al-Monitor, “By attacking Maqdisi, HTS wanted to send out several messages. First it wanted to gain public support and seek more acceptance in Syrian circles to enhance the popularity of the de facto authority imposed by it in northwestern Syria. HTS also wanted to encourage other military factions to further cooperate in its military council project that it has been planning for a while [in light of] demands to disband HTS. Announcing its divorce from non-Syrian jihadist organizations [in reference to al-Qaeda] confirms that HTS is an open Syrian organization that has relinquished the approach of extremism and radicalism.”

He said, “The second reason is political par excellence. The disavowal of Maqdisi had a specific timing, despite the deep dispute between the two parties in the past. HTS is currently working on forming a political representation bureau in Idlib and wants its activity to be accepted internationally by confirming its abandonment of Salafist jihadist authorities and its shift toward a group that believes in practicing politics and that can participate in the [Syrian] political solution.”

Sarmini added, “Most probably, the jihadist groups and organizations will be more obstinate in their stance toward HTS due to the tensions with Maqdisi. The jihadist groups [Hurras al-Din, Ansar al-Tawheed and others] will see the stance of HTS against Maqdisi as further proof of its deviation from ‘the path of jihad’ and a coup against jihadist authorities. This stance might put HTS at risk of more attacks and targeting from Islamic State [IS] cells or Hurras al-Din cells that have remained in northwestern Syria despite the HTS attacks and siege on the organization. Maqdisi is probably communicating with the leaders of these cells and talking to them about HTS’ breakaway [from jihadist groups, including al-Qaeda] and cooperation with international intelligence to pursue 'the muhajirin' [foreign fighters] and eliminate jihadist organizations.”

He noted that the tensions in relations between HTS and Maqdisi will not affect Hurras al-Din, as HTS decided to eradicate Hurras al-Din before the open tensions with Maqdisi. The latest altercation between the two parties was mainly due to HTS’ stance from jihadist groups, notably Hurras al-Din.

He argued that the Turkish role is present in the current tensions. According to Sarmini, one of the main reasons behind Maqdisi’s escalation against HTS is that Maqdisi believes HTS deviated from religion because of its coordination with Turkish intelligence in the pursuit of foreign fighters.

Sarmini added that some rumors are being circulated among revolution activists, especially those opposing HTS, whereby HTS facilitated handing over 2,300 foreign fighters to Turkey. “Most of them were IS members,” he said.

Sarmini added that the disavowal of Maqdisi and other steps HTS is taking to show its moderation may have been encouraged by Turkey. He explained that Ankara may want to strengthen its positions in the face of international actors and show that it is making progress in changing the structure of HTS and turning it into an organization that does not threaten international security.

Saleh al-Hamawi, aka Asseraa, is among the founders of Jabhat al-Nusra. He defected from it and is now one of its most vocal opponents and critics. He has not joined any organization after this and now lives in Turkey. He told Al-Monitor, “Maqdisi’s attacks on HTS are nothing new. They began when HTS — then-known as Jabhat al-Nusra — disengaged from al-Qaeda, and Maqdisi believed that was an unacceptable break of vows. He continued his intense attack when HTS allowed the deployment of Turkish [observation] posts in northwestern Syria, and when [HTS] withdrew from the east of al-Sikka in early 2018. He considered this an implementation of the Astana Agreement. He continued to attack HTS until the Sochi Agreement was reached. He believed HTS had become a tool in the hands of Turkey and insinuated to its apostasy. However, the blatant apostasy was after HTS protected Russian-Turkish patrols according to Maqdisi, who considered this act blasphemous and not open to interpretation.”

Hamawi added, “HTS washed its hands clean of Maqdisi since he supports Hurras al-Din but pitted its members to defect. But Maqdisi is not popular in Syria or among the jihadist factions. He only has young followers on the internet who wage attacks of blasphemy on HTS. Besides, Turkey has nothing to do with this and did not ask HTS for anything. In fact, Turkey is totally ignorant when it comes to jihadist groups.”

Maqdisi does not enjoy the support of factions in Syria, mainly because he has turned against all organizations he worked for. For instance, he supported IS at first, before he abandoned the group; he also attacks the Free Syrian Army factions, and even other Islamist factions, such as Ahrar al-Sham.