Syrian jihadi groups crack down on rivals in Idlib

Hayat Tahrir al-Sham is tightening the noose on the jihadi Jundallah group and asking it to join it or leave Idlib, in what observers described as an attempt on the part of HTS to get rid of non-Syrian fighters. 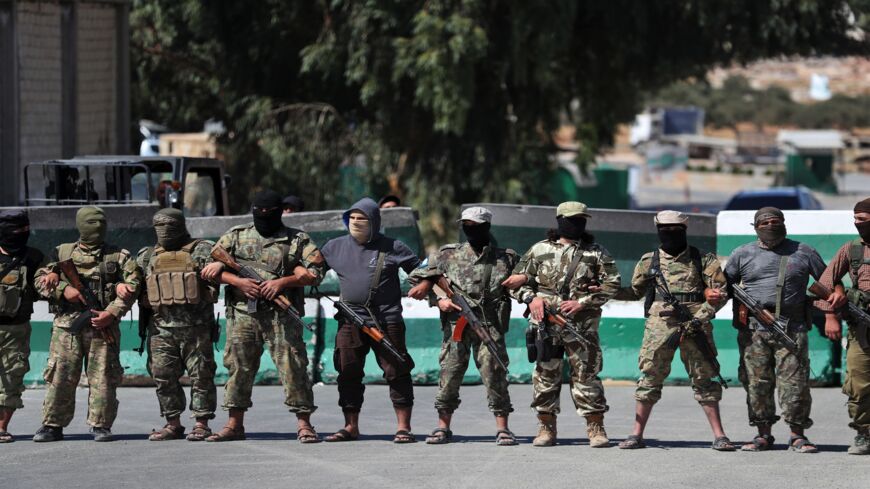 Jihadis of former al-Qaeda affiliate Hayat Tahrir al-Sham block demonstrators from approaching the Bab al-Hawa crossing between Turkey and Syria's northwestern Idlib province during a protest against the Syrian regime and its ally Russia on Sept. 20, 2019. - OMAR HAJ KADOUR/AFP via Getty Images

Hayat Tahrir al-Sham (HTS), which controls Syria’s northwestern province of Idlib, has recently worked to attract jihadi groups acting outside the limits of its authority by placing pressure on them and offering them as few as two options: either join the organization and act under its authority or dissolve themselves and leave Idlib.

Observers believe HTS wants to get rid of such groups to avoid jihadis and Salafists from regrouping and rebranding. Also, these observers believe HTS, through these moves, seeks to convey messages to the international community whereby it renounces terrorism, is fighting militants and is a local Syrian component.

Sources from within HTS told Al-Monitor the organization is determined to dissolve all groups operating independently, as it wants to move toward establishing a proper state with proper institutions.

The same sources said the presence of jihadi groups that operate individually prevents HTS’ efforts to turn Idlib into a quasi-state with its own approach and institutions, and this is what HTS wants to achieve in northwest Syria.

In this regard, sources familiar with jihadi affairs told Al-Monitor HTS has asked the Jundallah group to join it or dissolve itself and hand over its weapons. HTS gave the group a short period of time to make a decision and choose one of the two options.

The owner of the well-known @MzmjerSh Twitter account of a former jihadi leader from Syria stated in a post on July 8 that after the dissolution of the Chechen Jund al-Sham (Soldiers of the Levant) group, the remaining jihadi groups that were acting outside HTS’ authority in Idlib were Ansar al-Islam and Jundallah.

The leader said, “HTS has recently tried to monitor the locations of Jundallah on the coast in preparation for a military campaign against it.”

“As for the rest of the groups, such as Ansar al-Tawhid, the Turkestan [Islamic Party], Ajnad al-Kavkaz and Uzbek groups, they remain loyal to HTS and operate under its supervision. [Al-Qaeda-affiliated] Hurras al-Din (Guardians of Religion Organization), meanwhile, is dissolved, even if no official statement has been issued to this effect,” the leader added.

Jundallah is a jihadi group founded by Abu Fatima al-Turki and currently led by Abu Hanifa al-Adhari. It is stationed in the Jabal al-Turkman area, east of Latakia province. It is a small group believed to include no more than 40 members.

Asked about the restrictions on Jundallah, the head of media relations in HTS, Taqi al-Din Omar, told the Syrian news site Zaman al-Wasl on June 29, “It has been proven that some members of Jundallah were involved in security and criminal cases, and their leaders were asked to cooperate (by HTS) in order to arrest them and hold them accountable. However, the matter was not met with responsibility, and rumor has it that the group was expelled from Idlib.”

Omar added, “The security services in the liberated areas have managed to establish security and fight all kinds of crime. Some criminals and wanted individuals have decided to use the names of small groups to cover up their crimes, which will have negative consequences and will not be allowed by the authorities currently controlling the liberated north.”

Khalil Miqdad, a Qatar-based researcher focusing on jihadi groups, told Al-Monitor, “HTS is determined to end the presence of jihadi groups in Idlib. It wants to win over Turkey and the United States, and it also wants to impose its presence as a force that has the upper hand in Idlib. And it could be seeking to establish its own defense ministry affiliated with the Salvation Government that it runs. The mission of that ministry would be to transform HTS from a former jihadi faction into a national group.”

He added, “These jihadi groups are left with few options, as they are forced to either dissolve themselves or join HTS. Otherwise, HTS will be resorting to force. If these groups leave Idlib toward the areas under the control of Turkish-backed factions, they will be pursued and arrested by those factions. Some members of the jihadi groups that HTS has been reining in may join the Islamic State (IS) in order to protect themselves, but the road from Idlib to the Badia (Syrian desert) where IS is stationed is long and difficult.”

Miqdad further pointed out that by fighting these groups, HTS seeks to get rid of them and show itself as a local, national faction and political party.

In this context, Abu Muslim al-Uzbek, a jihadi leader close to the Jundallah group living in the Latakia countryside, told Al-Monitor, “HTS asked Jundallah to either join the organization or leave its positions and dissolve itself, but so far it has not taken any steps against the group. Jundallah is still stationed in its positions, but HTS will neither leave jihadi nor non-jihadi factions outside its authority and management, as it wants to bring together all of these factions and change its approach by force in order to prove to the international community that HTS is an open and moderate group. These jihadi groups [that HTS is going after] are internationally viewed as ‘terrorist' groups, and when HTS tightens the noose around their neck and disbands them, this infers that HTS is fighting terrorism, and this is what the organization wants to portray itself as doing.”

Uzbek added, “Jundallah is a peaceful group that only fights the regime, that does not interfere in Idlib politics and that does not engage in the affairs of the local community. This group does not pose any threat to HTS, nor does it compete with it, and these groups do not threaten the West, nor do they carry out operations outside Syria. Their No. 1 enemy is the Syrian regime and its Russian and Iranian allies.”