After Hayat Tahrir al-Sham told the Chechen jihadi group Jund al-Sham it could either join its ranks or leave Idlib, the group's members evacuated their military positions in the countryside of Latakia. 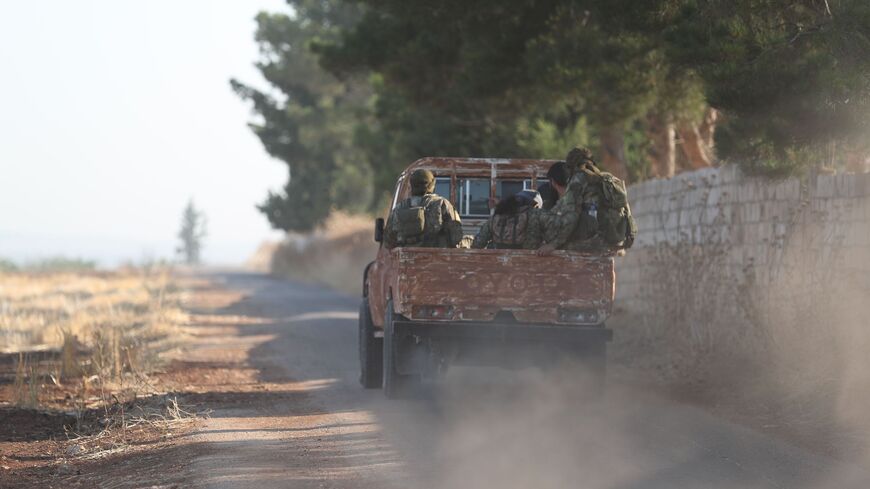 Fighters from the former al-Qaeda Syrian affiliate Hayat Tahrir al-Sham drive through the village of Hamameyat on the border between Hama and Idlib provinces on July 11, 2019. - OMAR HAJ KADOUR/AFP via Getty Images

IDLIB — Well-informed sources among jihadi groups told Al-Monitor that the Chechen Jund al-Sham (Soldiers of the Levant) group has given in to pressure from Hayat Tahrir al-Sham (HTS) and evacuated its military positions in the Latakia mountains.

The sources said that many members of Jund al-Sham left their weapons and went with their families to live in the countryside of Jisr al-Shughur in response to the demands of HTS, which had given the group the choice to dissolve itself or join its ranks.

According to the sources, HTS had given Jund al-Sham a deadline to dissolve or be forced to join it. In meetings between HTS leaders headed by Abu Maria al-Qahtani and five leaders from Jund al-Sham headed by Muslim al-Shishani, Qahtani rejected all the solutions Shishani proposed and insisted the faction be dissolved.

On July 2, Shishani shared the details of his meeting with HTS, saying that his group was asked to leave Idlib.

“We received a summons from the commander of HTS’ General Security Service, and the next day I went with fellow members to meet with him. He asked me to dissolve the group and leave Idlib, and he told me this is a final decision because HTS in control in Idlib and will not allow anyone to disobey it,” Shishani said in a statement that was circulated on social media.

He added, “Jund al-Sham has never been in any confrontation against HTS and has never engaged in fighting between factions since it was formed eight years ago. How can we be asked to leave after our leaders and members have become internationally wanted for fighting in Syria?”

Abbas Sharifeh, a Turkey-based researcher on jihadi groups at the Jusoor Center for Studies, told Al-Monitor, “Jund al-Sham dissolved itself in response to HTS’ demands. Did they really agree to this or is it for show? HTS does not mind if Jund al-Sham’s members still fight the regime [individually], so long as they are not part of a faction.”

He added, “HTS is trying to redraw the jihadi landscape in Idlib and add the fighters of the groups it dissolves to its ranks. It wants to show foreign parties that it is fighting and eliminating jihadi groups in Idlib.”

He noted, "Because Jund al-Sham dissolved itself, it does not pose a problem for HTS. Jund al-Sham members will remain as individuals in Idlib and some could head to the areas controlled by the Free Syrian Army affiliated with Turkey. They will not join HTS for ideological reasons. Meanwhile, the Taliban is not looking for new members, so very few former fighters from Jund al-Sham would end up joining it.”

Sharifeh pointed out that HTS is remaking the jihadi scene with only Syrian nationals to show that it is committed to international agreements.

A former jihadi leader nicknamed Abu Abd al-Rahman al-Shami who resides in Idlib told Al-Monitor, “Some of the small Syrian groups affiliated with Jund al-Sham decided to hand over their weapons and sit on the sidelines for now. They refused to join HTS and are waiting for a comprehensive entity that represents the entire local military force in Idlib. If Shishani does not go to Turkey, he might head to Afghanistan, but going to Afghanistan requires coordination with the Taliban.”

Shishani may choose to dissolve the faction but he will likely reach a private agreement with HTS that benefits both parties, he noted.

Shami added that all small formations of non-Syrian fighters and local rebels who oppose HTS and refuse to join it will face the same fate as Jund al-Sham.

Abu Khaled al-Muhajir, a jihadi leader close to Jund al-Sham residing in the Idlib countryside, told Al-Monitor, “Jund al-Sham has not completely dissolved itself, but it no longer has a presence in the field. The group will make an official announcement in a few days, and its fighters will remain as individuals fighting the regime. They will not be able to go to their home countries because they are wanted by the security services there. It would be better for them to stay and fight the Syrian regime but without being part of a group in Idlib.”

He added, “HTS is trying to establish a state and does not want any competition. Meanwhile, some former Jund al-Sham fighters might head to Turkey and live as civilians with their families, while others could go to Afghanistan, but Shishani will not leave Syria and HTS may arrest him in the coming months to eliminate any threat he may pose.”

An HTS leader residing in Idlib told Al-Monitor on condition of anonymity, “HTS is establishing a state and there will not be any groups within that state that are not under its umbrella. HTS will thus not allow any group to operate independently as it works to establish a unified institution. It is no longer what it used to be years ago: a group that then accepted the existence of other groups. The situation is completely different today.”