Some jihadist groups facing pressure from Hayat Tahrir al-Sham in Syria are eying Afghanistan as a new haven after the Taliban took control. 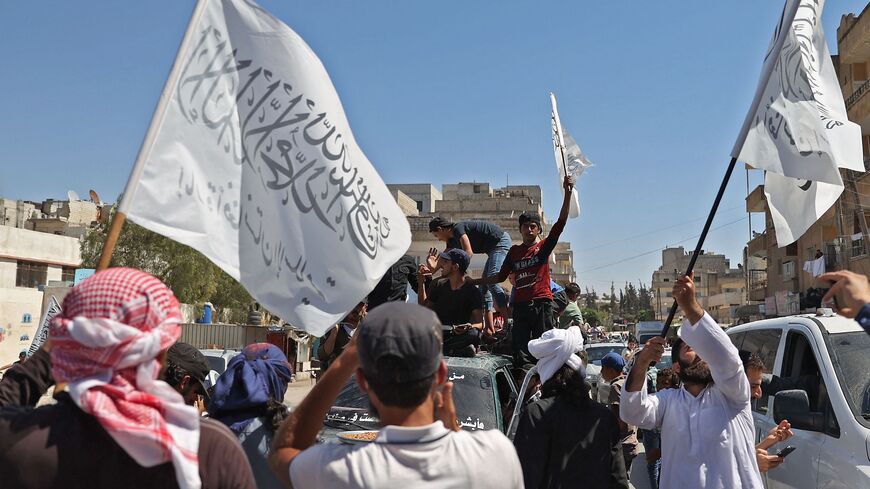 Members of Syria's top jihadist group Hayat Tahrir al-Sham, led by al-Qaeda's former Syria affiliate, parade with their flags and those of the Taliban's declared "Islamic Emirate of Afghanistan" through the rebel-held northwestern city of Idlib on Aug. 20, 2021. - OMAR HAJ KADOUR/AFP via Getty Images

Jihadi factions in Syria are hailing the Taliban’s takeover of most of Afghanistan. Hayat Tahrir al-Sham (HTS), which controls Syria’s northwestern province of Idlib, congratulated the Taliban on their “conquest” in an Aug. 18 statement.

Many other jihadi factions hostile to HTS followed suit, praising what they described as a “victory” by the Taliban. A group known as Al-Jihad Coordination, the Firqat al-Ghuraba battalion and Jund al-Sham issued separate statements congratulating the Taliban movement on their advance.

The congratulatory statements came from groups many observers believed had been eliminated. Instead they had been quietly avoiding persecution by HTS, which has been cracking down on groups espousing ideologies similar to al-Qaeda's.

Al-Jihad Coordination is led by Abu al-Abd Ashidaa, who was arrested in 2019 by HTS after having defected from it. He had opposed HTS’ approach and disassociation from al-Qaeda. In an Aug. 16 statement the group said, “To our people in beloved Afghanistan: You have reaped what you have sown. … On this glorious occasion, we call upon all vanguards of the Ummah, the patient mujahideen everywhere, to have patience and show steadfastness. This is the path you have to follow. Do not be deceived by the armies of the enemies, for God is higher and more exalted. He who walks the path will reach his destination. God will not neglect to reward those who do good deeds.”

Jund al-Sham also congratulated the Taliban, saying, “We promise you to continue our jihad in Syria until we meet God or reap the fruits of our efforts, asking God to grant success and luck to the Taliban.”

The Firqat al-Ghuraba group led by French jihadi Omar Omsen said in a statement, “The Mujahideen in the blessed Levant congratulate you on this manifest victory that has been achieved after many years of patience, endurance and sacrifice. … You are a source of pride and honor. You are an example to all the Islamic nation.”

Abbas Sharifa, a researcher at the Jusoor Center for Studies in Istanbul, told Al-Monitor, “The Taliban takeover of Afghanistan has boosted the morale of the jihadi groups in Syria and gave them a sense of moral victory. This reassured them that the jihadi groups that carry weapons are better off than the groups that followed the political path and failed, such as the Muslim Brotherhood in Egypt and Tunisia. This victory further convinced jihadi groups who just like the Taliban reject democracy and political life that this approach is better than political Islam.”

He added, “The jihadi groups in Syria will not reap direct benefits from the victory achieved by the Taliban. They will only exploit this conquest in the media, especially considering the Taliban sent many messages that they are not ready to support cross-border movements. The Taliban do not want at this stage to cause inconvenience to other countries by supporting radical groups. They seek to be a state rather than just an organization. Meanwhile, amid the failure of all political and democratic solutions, the Taliban victory will strengthen the conviction of many Syrian youth that the armed struggle is the prevailing option.”

Sharifa expects many jihadi groups to move from Syria to Afghanistan and take advantage of the chaos there. “Many of the leaders of these groups can settle in Afghanistan as political refugees without being militarily active against any party,” he said. “Al-Qaeda in Syria no longer exists … but it could … exploit the Taliban conquest among the youth and make a comeback.”

A jihadi leader who goes by Abu Hafs al-Shami and resides in Idlib told Al-Monitor, “It is too early to talk about the material gains jihadi groups in Syria may reap from the Taliban’s victory. These groups could gain strength if the Taliban prove able to form an internationally recognized and stable state.”

He added, “I don't know if there are foreign fighters who would like to come to Syria. This is unlikely, except for very few individual cases, at least for the time being. On the contrary, many non-Syrian fighters chose to leave the Syrian arena. The victory of the Taliban will not be beneficial to al-Qaeda in Syria since this faction is no longer present as a coherent entity here, but has turned into cells that work deep in the areas controlled by the Syrian regime. I do not expect al-Qaeda to resurface, at least in the short or medium term, for many reasons.”

A foreign jihadi leader who declined to reveal his name and nationality told Al-Monitor, “We are happy with the Taliban's takeover. Now, many of our brothers who have been oppressed by HTS will go to Afghanistan, which has become safe for them under the Taliban's control. I know leaders who faced oppression by HTS in Idlib, and they are now getting ready to move to Afghanistan.”

He added, “Fighters of Uzbek and Tajik origin are the most thrilled about the victory of the Taliban. Now, they can go to Afghanistan without being handed over to their governments to be jailed, as was the case during the era of [Afghan President] Ashraf Ghani. Perhaps individual fighters from Uzbekistan will find their movement easier than before. This, however, … will be limited to individual cases. HTS will not allow anyone to come to Syria. It recently arrested some non-Syrian fighters who had come to Idlib.”