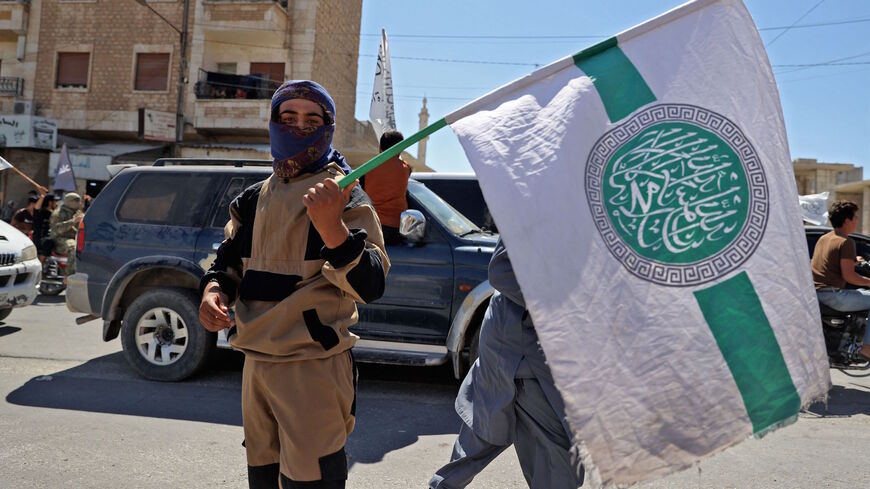 A member of Syria's top jihadi group, Hayat Tahrir al-Sham, which is led by al-Qaeda's former Syria affiliate, holds the group's flag as others parade with their flags and those of the Taliban's declared "Islamic Emirate of Afghanistan" through the rebel-held northwestern city of Idlib on Aug. 20, 2021. - OMAR HAJ KADOUR/AFP via Getty Images

The Biden administration has vowed retaliation against the Islamic State Khorasan (IS-K) for the Aug. 26 attack on the Kabul airport thath killed 13 US armed service members and over 90 Afghan civilians. More violence is likely. US Marine Corps Gen. and CENTCOM commander Kenneth "Frank" McKenzie said after the attack that "we expect those attacks to continue."

There are an estimated 10,000 foreign fighters in Afghanistan, over 2,000 IS-K members, and perhaps just 200 or so al-Qaeda members in South Asia, according to the Pentagon.

The US military knew that the threat from the Taliban, al-Qaeda, and IS-K was on the rise, and that the Afghan government would be hard-pressed to meet their challenge after the US withdrawal. The June 2021 quarterly report of the Pentagon Inspector General about the US combat mission in Afghanistan made the following observations, worth reviewing here, in light of recent events:

-"Medium" threat over two years. In June, when asked in a Senate hearing about the likelihood of al-Qaeda or IS regenerating inside Afghanistan and presenting a threat to the US homeland, US Secretary of Defense Lloyd Austin said, “I would assess it as medium. I would also say … that it would take possibly two years for them to develop that capability.” That assessment may be upgraded, given events of the past month.

-"No change" in al-Qaeda-Taliban ties. Although the US Defense Intelligence Agency (DIA) said the Taliban is “very likely” to request that al-Qaeda restrict its actions, per the US-Taliban agreement of February 2020, McKenzie said that if “left unmolested [al-Qaeda militants] are certainly going to rebuild, restrengthen themselves, and we have no reason to doubt they … want to attack us in our homeland." The DIA assessment was that there has been "no change" in the Taliban-al-Qaeda relationship.

-"Educated extremists." IS-K this year has been "taking advantage of the political instability and violence in Afghanistan by using the opportunity to bolster its public support and recruitment efforts. … attacks have increased ISIS-K’s public visibility and will help bolster its recruitment of disenfranchised Taliban members and other “educated extremists,” according to the DIA.

The United States and the Taliban share an interest in thwarting IS-K, but expectations should be low. This shared interest does not lead to an "enemy of my enemy" logic, or any notion of partnership. The Biden administration gets this.

Last week we wrote that Afghanistan, even before the Taliban takeover, ranked "as one of the most at-risk, fragile economies in the world." in other words, a potentially failing or failed state, the textbook breeding ground for terrorist groups. And with the Taliban, it just got exponentially worse.

Like the United States, Russia has no faith that the Taliban will be willing or able to keep al-Qaeda and other jihadi groups away, or contain the growing threat from IS-K.

The Taliban takeover of Afghanistan "poses new challenges for Russia and its Central Asian allies such as Tajikistan, Kyrgyzstan and Uzbekistan," writes Kirill Semenov. "While the Americans were present in Afghanistan, they could provide counterterrorism measures that benefitted Afghanistan’s Central Asian neighbors. But after the arrival of the Taliban, a security vacuum may emerge, and the Taliban may face serious difficulties in solving this problem."

Given that IS has been territorially defeated in Iraq and Syria, it’s no surprise that jihadis and foreign fighters, especially those experienced in Syria’s conflict, could soon make their way to Afghanistan.

The US-led coalition ended IS control of territory in Iraq and Syria in March 2019, thereby shifting to the fourth and final phase of the mission, termed "normalize, transitioning from training, developing, and assisting partner forces in Iraq and Syria to advising and enabling them."

IS, according to the DIA, remains cohesive but operates as a “low-level” and “well-entrenched” insurgency in rural areas of Iraq and Syria. The IS strategy, according to the June 2021 quarterly Pentagon Inspector General's report, "is to sustain the group’s notoriety, rebuild influence among the local populace, and reestablish a self-described 'caliphate' in the region."

The relative success of the campaign to defeat IS in Iraq and Syria combined with the Taliban takeover has been an inspiration and magnet for kindred jihadis, especially those in Syria, and some may consider relocating to pick up the fight in Afghanistan.

In Idlib, Syria, which is primarily ruled by Hayat Tahrir Al-Sham (HTS, or "Liberation of the Levant"), an al-Qaeda offshoot and US-designated terrorist group, "Jihadi factions are hailing the Taliban’s takeover," writes Sultan al-Kanj from Idlib.

Even factions hostile to HTS have sung the Taliban’s praises, Kanj reports. "Statements came from groups many observers believed had been eliminated. Instead, they had been quietly avoiding persecution by HTS, which has been cracking down on groups espousing ideologies similar to al-Qaeda's."

HTS and its leader, Abu Mohammad al-Jolani, have been attempting a makeover in relations with the West, but the public relations campaign has hit a wall.

What the Taliban and HTS "share is the West’s deep skepticism of them," write Kanj and Amberin Zaman. "The suit-wearing Jolani’s dovish overtures fly in the face of his iron grip over Idlib."

Khaled al-Khateb reports on the outcry among civil-society activists over a slew of unfair detentions and trials. "Such factions capable of transit from Syria to Afghanistan may include, for example, Katibat al-Tawhid wa al-Jihad (not to be confused with the Iraqi group of the same name), consisting of fighters from the Central Asian republics, primarily Uzbekistan and Tajikistan, many of whom came from Russia where they were looking for work," writes Semenov.

Turkish President Recep Tayyip Erdogan is considering an offer by the Taliban to help operate the airport, but he’s in no rush to make a decision, as we report here, after three and a half hours of meetings between Turkish diplomats and Taliban officials in Kabul.

Although Turkish discussions with the United States and NATO over airport security broke down, "Two Turkish security officials told Reuters that Ankara won’t help run the airport unless the Taliban allows Turkey to maintain a security presence. One official said the Taliban’s security plans, including watchtowers surrounding the airport, are not sufficient to protect Turkish personnel providing logistical support."

Turkey’s role, if there were to be one, would be about more than airport security.

"Much will depend on Turkey's … readiness to provide a corridor for the transfer of foreign fighters from Syria to Afghanistan," writes Semenov. "Considering the current level of relations between Ankara and Moscow on the one hand and the Central Asian republics on the other, it’s unlikely Turkey will provide assistance to these groups. But their presence in Idlib and the potential for them to move to the Turkish-controlled zones in Syria also threatens Ankara’s security interests."