No good news for Turkey from jihadi ranks in Syria

Ahrar al-Sham, a prominent armed group that has often collaborated with Turkey in Syria, is hit by infighting that plays into the hands of Hayat Tahrir al-Sham and dampens Turkish plans to remold rebel factions in Idlib. 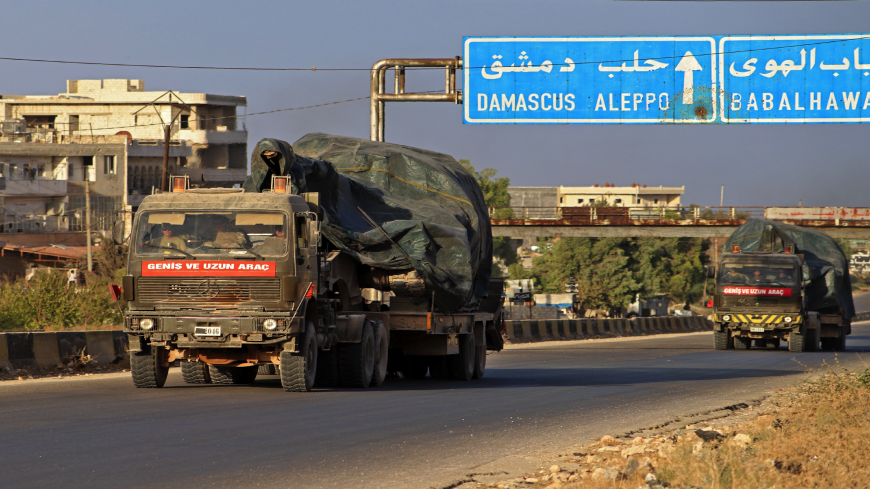 Turkish military vehicles, part of a convoy, drive through the town of Ariha in the rebel-held northwestern Idlib province on Oct. 20, 2020, after vacating the Morek post in Hama's countryside. - ABDULAZIZ KETAZ/AFP via Getty Images

Turkey has gained ample experience in organizing, training, equipping and using armed militants in Syria since it forayed into the theater of war in 2016. Various groups at odds with each have come under Turkish control under the banner of the Syrian National Army (SNA). Yet Turkey’s efforts to end rifts between armed groups in Idlib, the last rebel stronghold in Syria, and merge them into an organized army are failing.

Turkey has assumed commitments to eliminate terrorist groups under the Astana, Sochi and Moscow accords with Russia. Its efforts thus far have been aimed at reshaping armed factions in a bid to repel Russian pressure and stave off regime offensives in the region. Most importantly, it has sought to transform Hayat Tahrir al-Sham (HTS), a UN-designated terrorist organization and the dominant outfit in Idlib. The options of rebranding or dissolving the group have been floated in the past, but lately, Turkish intelligence has been pushing for a joint military council between HTS, the SNA and the National Liberation Front (NLF).

HTS, for its part, has followed a policy aimed at sustaining its dominant position in Idlib. First, it has been careful to stay on good terms with Turkey. Second, it has sought to lure the NLF, which involves Islamist groups, to its side. Third, it has been trying to present itself as a local force opposed to the regime without any ambitions beyond Syria. And fourth, it has sought to suppress rival al-Qaeda-linked groups, thus appearing as a force clamping down on radicals.

The control of SNA factions, which have backed the three Turkish military campaigns in northern Syria, has been relatively easy for Turkey, though controlling the rebels has not meant keeping them from committing crimes such as looting, abduction and extortion. Yet securing the unconditional loyalty of factions in the NLF, formed with Turkish backing in 2018, has proved an uphill task, not to mention that of HTS. Above all, the factions differ ideologically.

The infighting that rattled Ahrar al-Sham, the largest NLF faction, earlier this month comes as a fresh reminder of how difficult it is to mold rebel militias, even the relatively friendly ones.

Ahrar al-Sham, which has often collaborated with Turkey, came to the brink of a split amid a rift between its political leader, Jaber Ali Pasha, and the HTS-sympathetic military wing. The row erupted over an alleged HTS-backed plan to overthrow Pasha and replace him with the group’s former commander, Hassan Soufan, who has reportedly mended fences with HTS leader Abu Mohammed al-Golani. On Oct. 10, Pasha sacked a commander close to Soufan, unleashing a showdown with Soufan proponents that led him to dismiss other commanders Oct. 23, including the head of the group’s military wing, Abu al-Mundhir. Helped by HTS, the mutinous camp raided Ahrar al-Sham positions in Ariha, al-Foua and Jabal al-Akrad. HTS sent reinforcements to Ariha and al-Foua on the pretext of defusing the tensions. Eventually, reconciliation talks began Oct. 25 between the two sparring sides, though neither seemed to step back.

The row within Ahrar al-Sham — which serves to strengthen HTS — is hardly good news for Ankara, as it sees Ahrar al-Sham along with Faylaq al-Sham as the backbone of the armed opposition. Soufan might end up on Ankara’s blacklist for instigating the rift. What Ankara hopes for is not the fragmentation of allied factions, but the formation of a stronger force by luring a weakened or more pragmatic HTS into a joint military council. Yet the infighting has generally played into HTS's hands.

The HTS, meanwhile, has sought to assert itself as Ankara’s sole interlocutor in Idlib, but its flexible attitude toward Turkey has deepened rifts in Salafi jihadi ranks, both between the pragmatist and radical wings of HTS and among al-Qaeda-inspired factions. HTS feels threatened by the emergence of an alternative coalition led by Hurras al-Din, the faction formed by HTS defectors opposed to the group’s pragmatic approach to the Astana accords and “concessions” to Turkey. In June, Hurras al-Din led efforts to form a joint operation room with like-minded groups, which resulted in clashes with HTS and fueled accusations that HTS is suppressing Hurras al-Din militants at the behest of Turkey. On Oct. 19, HTS arrested 25 fighters from Hurras al-Din and other jihadi groups in Idlib and al-Foua.

The arrests followed clashes between HTS and rival Salafi jihadis near Harim Oct. 11. HTS said it killed 13 people affiliated with the Islamic State, but locals claimed the clashes were between HTS and Hurras al-Din.

By curbing rival radicals, HTS hopes to assert itself as an acceptable dialogist for Turkey, no matter that Ankara, too, designates it as a terrorist organization. Its collaboration with Turkey, however, has fueled a legitimacy row in jihadi ranks. In an Oct. 19 fatwa, Abu Muhammad al-Maqdisi, a prominent jihadist ideologue, denounced HTS as a cohort of Turkish intelligence, asserting that membership in and cooperation with the group was against Sharia.

Indeed, Turkey attributes value to the HTS’s apparent inclination to recast itself and the cooperation potential offered by the group’s pragmatist wing. Turkish soldiers and intelligence officers are already communicating and coordinating with them on the ground.

The United States, too, appears inclined to accord selective treatment to groups designated as terrorist organizations. US drones have often targeted al-Qaeda-linked groups, but not HTS. On Oct. 22, 17 jihadis, most of them senior figures, were killed in a US drone strike in the Salqin area that targeted a dinner attended by high-ranking HTS defectors and Hurras al-Din leaders. Two senior Hurras al-Din figures perished in a similar US strike Oct. 15, which followed two deadly US raids in September and August.

Consolidation efforts among die-hard radicals have been driven mainly by the HTS’ acquiescence to Turkey’s military observation posts and then the reopening of the key M4 highway under the March 5 Moscow deal between Turkey and Russia. These radical groups, in which foreign fighters hold sway, are now concentrated to the west of M4, especially around Jisr al-Shughur and in the Latakia countryside.

HTS had escorted Turkish troops arriving in the Idlib region in October 2017 to set up the observation posts, effectively joining Turkey’s military-intelligence coordination network. This partnership suggested that Turkey would exempt HTS from the scope of factions slated for elimination. Since then, however, Turkey has essentially refrained from tackling the al-Qaeda-linked groups as well. In other words, Turkey has been reluctant to make any enemies in Idlib despite its promises to Russia, counting on HTS to purge radicals defying the Turkish-Russian accords.

In sum, a hodgepodge of armed groups, which could be useful to a certain extent but difficult to manage, remains in Idlib. The groups loyal to Turkey have often acted as criminals. Islamist groups willing to get along with Turkey are plagued by infighting. And those designated as terrorists yet treated as “acceptable” groups have shown a pragmatic, collaborative face but are no different from al-Qaeda at the end of the day. When it comes to outright al-Qaeda affiliates, Turkey has yet to take them on, having left the job to the United States and HTS for now.