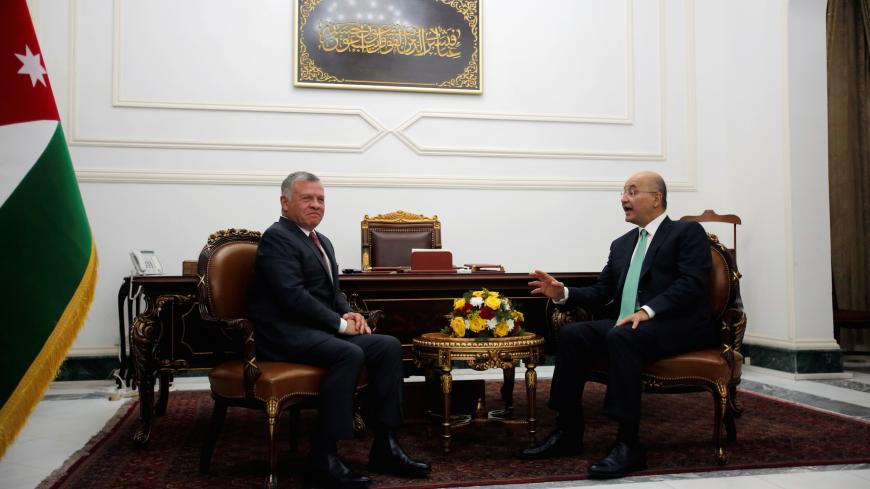 The good news of the Iraq-Jordan trade deal

The trade agreement signed Feb. 2 between Iraq and Jordan could signal a welcome trend toward regional commerce and integration, and away from conflict and zero-sum politics.

The deal follows a warming trend in Iraq-Jordan ties in recent months, as Osama Al-Sharif explains.

Jordanian Prime Minister Omar Razzaz said Feb. 2, “Our presence here today is a confirmation of Iraq’s successes in overcoming political and economic crises and fighting terrorism.” Iraq’s National Intelligence Service this week broke up one of the largest cells funding Islamic State (IS) terrorists in Iraq and arrested 13 French citizens affiliated with IS.

The expansive agreement — which includes specific steps and incentives to expand bilateral trade, undertake joint ventures and provide preferential pricing and access for Jordan to Iraqi oil and for Iraq when it comes to Jordanian electricity — is a breakthrough in bilateral ties and should be a clear win for both countries and their citizens.

Not surprisingly, the deal has its critics and skeptics in Iraq who claim that Jordan will gain at the expense of their country, as Mustafa Saadoun reports. Trade agreements always have their discontents. Although the deal was signed less than three weeks ago, there is already angst in some Iraqi quarters, including from opposition figures in the Council of Representatives (parliament).

The ultimate success of the deal will of course depend on its implementation, but the signs are all good. The scope of the agreement assures a wide reach into both the Iraqi and Jordanian economies, and it is easy to see how the arrangement should be a boost for both countries, where there is plenty of room to grow. The fears and anxieties of the critics, it seems, are likely to be misplaced.

The trade deal, according to Iraqi President Barham Salih, also “reflects Iraq's keen pursuit to openness towards its neighbors, brothers  and friends.” The agreement is therefore part of a new direction in Iraqi foreign policy that seeks comity and economic engagement with all its neighbors, including Jordan, Iran, Saudi Arabia and other Gulf states, while keeping close ties with the United States. Iraq’s leadership of this trend toward a more open and economically focused foreign policy, including and especially in the Levant, could be a catalyst for a new direction in regional politics.

Turkish President Recep Tayyip Erdogan may have been weighing military action in Syria as a means to boost the Justice and Development Party (AKP) ahead of the March 31 elections, which he has described as a “matter of survival,” as Kadri Gursel explains.

“Two frameworks were already in place for such action," Gursel continues. “The first was the still-unimplemented timetable that Ankara and Washington agreed in June to cleanse Manbij, a town on the western bank of the Euphrates River, of the People’s Protection Units (YPG), the Syrian extension of the Kurdistan Workers Party (PKK), which both sides designate as a terrorist group. The second was the idea for a ‘safe zone’ on the Syrian side of the border, stretching from the eastern bank of the Euphrates to the Iraqi frontier, to keep the YPG-PKK and regime forces away from the Turkish border.”

“Ankara may believe that a low-risk military operation in Syria will stir up nationalist sentiment and help it avoid losses in the local polls, but obviously, such an operation cannot take place without a deal with the United States or Russia,” writes Gursel.

“The main factor that keeps Ankara from action is the dramatic shift that Trump’s decision to pull out has caused in favor of Russia, the Damascus regime and its ally Iran. The US-Russia balance in Syria had allowed Ankara to increase its clout by engaging in dialogue and collaboration with both sides and playing them against each other. The more this balance caves in, the more Ankara’s importance and influence wane,” adds Gursel.

“In the first notable sign that things have changed, Erdogan said on Feb. 3 that Ankara had maintained relations with Damascus ‘on the level of intelligence services.’ His remarks on the state-owned TRT channel were the first time he revealed intelligence contacts with Syria since his adoption of a regime change policy in 2011. ‘You should not break ties completely even with an enemy, for you may need those ties one day,’ he added,” reports Gursel. “Obviously, that day had come for ties with Damascus, and the Turkish public had to be prepared to face up to reality.”

“Russia, relying on the Sochi accord, has squeezed Turkey into a corner at Idlib, pressuring Ankara for months to control or exile jihadist factions," writes Fehim Tastekin. “Ankara in turn is pressuring the jihadists, who are split over how to avoid Turkey's wrath. Meanwhile, Turkey supports the moderate factions — but not everyone defines ‘moderate’ the same way.”

“The Hayat Tahrir al-Sham (HTS) alliance, once linked to al-Qaeda, routed the Turkey-allied National Liberation Front (NLF) in clashes during the first days of January and imposed control over 90% of Idlib. HTS then adopted a more pragmatic attitude toward Turkey — one that didn't sit well with all of the group's factions,” explains Tastekin.

“Although HTS leaders didn't oppose Turkey placing observation posts around Idlib, they were uneasy with the Turkey-backed opposition groups adopting an anti-Kurdish agenda to please Turkey,” Tastekin continues. “HTS leader Abu Mohammad al-Golani, after installing the Syrian Salvation Government in the areas the group captured at Idlib, extended an olive branch to Turkey and the moderate rebel groups it supports. Golani first revealed HTS' support of Turkey’s military plans to advance on Kurds east of the Euphrates River. He then began a purge of the radical wing of his organization that caused a split with influential member Abu Yaqzan al-Masri. Golani also banned the issuing of fatwas (religious decrees) by any source other than the group's general council.”

“For some time now, there have been reports that Turkey will combine the Syrian National Army and HTS, and thus preserve the status quo at Idlib," reports Tastekin. “If this goal is reached, next in line would be the purge of foreign Uighur, Uzbek, Arab and Caucasian fighters from HTS ranks. In the latest tension among the jihadists, foreign outfits that usually try to maintain good relations with Turkey took positions supporting the HTS. The Turkistan Islamic Party of the Uighurs, the Tawhid and Jihad Brigade of the Uzbeks, and the Chechen-led Jaish al-Muhajireen wal-Ansar (JMA, the Army of Emigrants and Supporters) issued a joint declaration of being in the HTS ranks.”

Meanwhile, Khaled Al-Khateb reports, “HTS-affiliated security officials in Darat Izza, in western Aleppo, notified more than 30 influential citizens there that they had to leave within 24 hours. The outcasts included academics, media activists, civil servants and some people who worked with the FSA-affiliated Free Syrian Police. These citizens headed to Afrin, which is under Turkey-affiliated FSA control.”

“It's hard to predict how Golani’s latest initiative will change the story in Idlib, but it's certain that further splits of some radical wings from HTS will strengthen Tanzim Huras al-Din,” writes Tastekin. “The Islamic State also can expand its cells with segments splitting from HTS. For the past two years, when Turkey couldn't fully control HTS, it tried splitting it into smaller units. HTS could again find common ground with Turkey-supported groups. Russia constantly reminds Turkey that there are deviations from their road map for Idlib and their obligations over the Sochi accord.”

“The fact that the next meeting of the Astana partners will take place in Turkey in April suggests that Russia is not pressing for a major offensive against the HTS in Idlib before Turkey’s local polls, unwilling to put the AKP in a tight spot on the eve of elections since such an operation could unleash a fresh wave of refugees,” adds Gursel.