Is Turkey headed for compromise or fresh fighting in Idlib?

Turkey’s military buildup and efforts to collaborate with the dominant rebel group in Idlib appear to be the harbinger of a fresh war in the region, yet rebel forces suspect that Turkey is willing to concede to Russia. 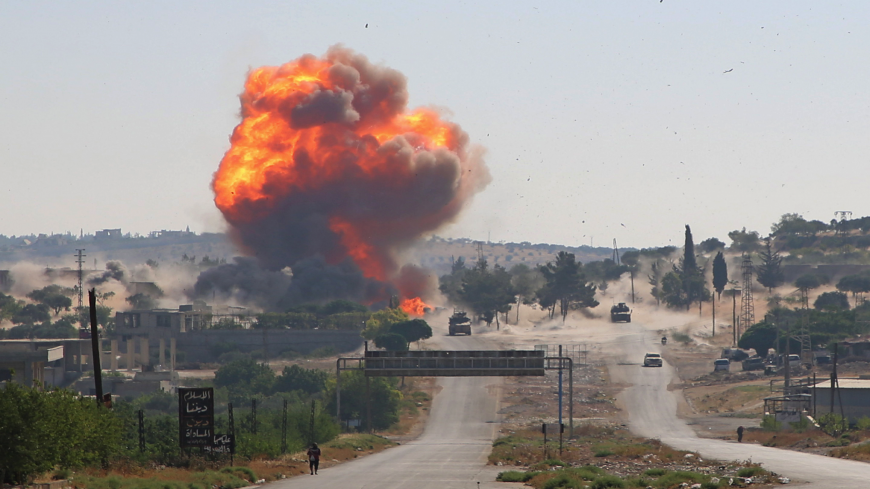 A fireball erupts from the site of an explosion reportedly targeting a joint Turkish-Russian patrol on the strategic M4 highway, near the Syrian town of Ariha in the rebel-held northwestern Idlib province, on July 14, 2020. - MOHAMMED AL-RIFAI/AFP via Getty Images

The de-escalation zone in northwest Syria has been the scene of puzzling developments lately, overshadowed by the conflict in Libya. Turkish military convoys have continued to stream to rebel-held Idlib, and the Syrian army has stepped up reinforcements to the region. While the mutual buildup raises the specter of a new confrontation, Syrian opposition forces claim that Ankara has reached a new understanding with Moscow under which the Bab al-Hawa border crossing with Turkey would be left to Russian control along with the key M4 and M5 highways.

The accord that Turkey and Russia sealed in Moscow March 5 called for joint patrols along M4 to secure the reopening of the road. It was only on July 22 and on their 22nd attempt that the joint patrols managed to fully cover the slated route from Taraba, west of Saraqeb, to Ain Hour in the Latakia countryside.

Around the same time, sources close to Turkish-backed factions claimed that Turkey had agreed to let Russia control the route from Zawiya Mountain to Jisr al-Shughur on the southern side of M4 and keep allied militia away from the area in return for keeping its military observation posts in Idlib.

Also, allegations circulate that M5, under Syrian army control since February, will be connected to the Bab al-Hawa border crossing via Atarib and that Russia will assume control of the crossing, which is currently in the hands of Hayat Tahrir al-Sham, the dominant armed group in Idlib.

Bab al-Hawa is the only crossing at the Turkish border that remains open for humanitarian aid after Russia and China vetoed a UN Security Council resolution on the issue earlier this month. Last year, 115,000 trucks crossed to Syria via Bab al-Hawa. Hayat Tahrir al-Sham is estimated to generate some $4 million a month from the crossing. The group is unlikely to easily cede the crossing without some favorable changes in Idlib. Likewise, Turkey would hardly agree to such a move without securing some gains in return.

The Russian-Turkish collaboration in Idlib, which took shape on the Astana platform, has never precluded confrontation between the two sides. Developments on the ground suggest the Turkish military is not ruling out any scenario and is preparing to respond accordingly. Above all, Ankara wants to prevent any operation akin to the one in February that resulted in M5 falling under control of the Syrian army. Turkey at the time warned the Syrian army to withdraw from Turkish observation posts or face military action. Though it failed to deliver on its ultimatum, it managed to stop the Syrian army from marching to M4 through the Moscow deal. The accord called for the reopening of M4, the establishment of a security corridor with a depth of 6 kilometers (nearly 4 miles) on either side of the road and the elimination of terrorist groups in Idlib.

Since then, Turkey has conducted joint patrols with Russia on M4, while stepping up efforts to redesign the rebel scene in Idlib. The Turkish moves have sought to secure the rapport of Hayat Tahrir al-Sham, use the group to rein in al-Qaeda-linked factions flouting the Moscow deal and increase the deployment sites of Turkish forces. Military convoys of up to 35 vehicles have streamed into Idlib once or twice a week, heading to various areas in the province.

The Syrian Observatory for Human Rights reported July 24 that nearly 5,000 military vehicles had crossed from Turkey since March 6, when the latest cease-fire took effect. It has tallied the entry of 8,325 military vehicles and more than 11,500 troops since February. The number of Turkish checkpoints around Idlib, meanwhile, has reached 66.

The military buildup underscores Ankara’s resolve to preserve the status quo in Idlib by using M4 as a barrier blocking the Syrian army. Turkey’s military presence has become also its main bargaining chip in a prospective political settlement in Syria. Furthermore, in return for facilitating Russia’s job in Idlib, Ankara hopes to further extend the security corridor it has secured along its border in northeast Syria in a bid to completely remove the Kurdish People’s Protection Units from the border.

Meanwhile, Turkey has continued to push for remaking Hayat Tahrir al-Sham and forging a united opposition front. Last week, opposition media reported that rebels from al-Fatah al-Mubeen — a joint operation room that had been formed by Hayat Tahrir al-Sham, the National Liberation Front and Jaish al-Izza to stop the Syrian army’s advance on M5 — met with Turkish intelligence officers at Bab al-Hawa to discuss a new joint military council and operational room led by Hayat Tahrir al-Sham. The meeting followed moves by Hayat Tahrir al-Sham to suppress rival factions, including a newly formed coalition, Fathbutou (Be Steadfast), which not only challenged its authority but threatened to provide Russia with a justification to resume military operations.

Turkey’s plan to bring rebel groups into a new joint setup aims to take Hayat Tahrir al-Sham under control and allow Ankara to claim it has disabled terrorist groups. Such efforts are seen also as an attempt to prepare rebel forces for potential battles down the road.

The Syrian military has been tightening the noose around Idlib, stepping up operations in Zawiya Mountain, al-Ghab plain and Jisr al-Shughur as well as in western Aleppo.

In response, al-Fateh al-Mubeen coalition has sent reinforcements to southern Idlib, Naji Mustafa, a commander from the National Liberation Front, said July 24. The coalition is responding to cease-fire breaches by the Syrian army and enhancing its readiness for future battles, he added.

In sum, Turkey could give some concessions in Idlib in a bid to ease the pressure of its commitment to eliminate terrorist groups and, furthermore, to soften Russia in Libya amid a standoff over the key cities of Sirte and al-Jufra. Such concessions, however, do not mean that Turkey would forfeit the leverage of its military presence on the ground and clout over militia forces. A cycle in which conflict dictates collaboration with Russia but collaboration fails to avert conflict appears bound to continue.