The latest Russian-Turkish deal in Syria’s rebel bastion of Idlib is off to a shaky start amid threats by armed groups to respond violently to attempts to open the critical M4 highway. 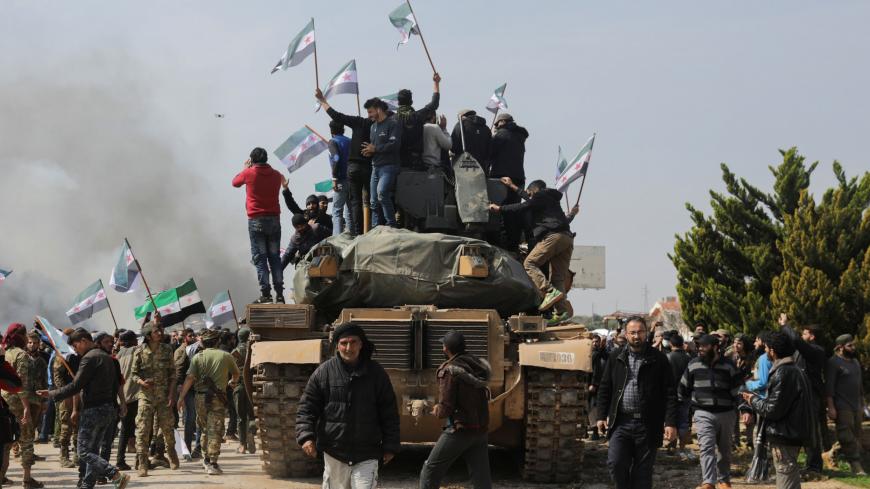 The latest Russian-Turkish deal on Syria’s rebel stronghold of Idlib brings to mind a popular Turkish saying: “One should not say amen to a forlorn prayer.” Developments on the ground have reinforced misgivings over the fragility of the arrangement, which Ankara insistently calls a cease-fire but, in fact, contains commitments that require military action.

The deal, sealed in Moscow March 5, called for the cessation of hostilities, provided that the fight to eradicate terrorist groups continued, as well as for the reopening of the M4 highway and the creation of a security corridor with a depth of 6 kilometers (3.7 miles) on either side of the critical road. March 15 was set as the start date of joint Russian-Turkish patrols along a stretch between the settlement of Trumba, 2 kilometers to the west of Saraqeb, and the settlement of Ain al-Havr, after the Russian and Turkish defense ministries agreed on specific modalities.

But before the patrols began, protesters burning tires or staging sit-ins greeted Turkish armored vehicles, accompanied by an earth digger, on the road. According to the media arm of Hayat Tahrir al-Sham, the main radical group in Idlib, “the free activists and peoples of the north” were protesting the planned patrols on the M4 “by the Russian invaders.” Armed militants from Ansar al-Islam, an al-Qaeda-inspired group, were reportedly among the groups blocking the road.

Russian military police and Turkish army troops launched the first joint patrols March 15, but the mission was far from smooth. While Turkey’s Defense Ministry said the mission had been executed, the Russian Defense Ministry said that the joint patrols were cut short because of “provocations” by radical groups outside Turkey’s control. “The terrorists attempted to use civilians, including women and children, as a human shield,” the statement said.

The patrols took place in a 2-kilometer stretch to the west of Saraqib, controlled by the Syrian army. This could be described as saving the day at best. And in a reminder that the situation is not as simple as Ankara portrays it, the Russian Foreign Ministry said the following day that militants in Idlib were not complying with the cease-fire, taking counteroffensive action in the region.

The patrols, in fact, are the easiest part of the joint action plan. And even if they do take place in the designated area, this would not mean the M4 is safely reopened. The most crucial part of the deal is the planned security corridor along the road, which encompasses critical towns such as Jisr al-Shughur, Ariha and Nayrab. Jisr al-Shughur, in particular, is under the tight control of foreign jihadi groups such as the Turkistan Islamic Party. According to Russia, Turkey has requested more time to implement the understanding on the security corridor.

But will buying time make a difference?

Turkey is faced with major, self-inflicted predicaments in Idlib. It is reluctant to treat the jihadi factions it has backed and allowed to use its borders as terrorist groups. That those factions appear on Turkey’s own list of terrorist groups, in line with UN resolutions, has not changed its actual attitude on the ground. President Recep Tayyip Erdogan reckoned he could use his influence over those factions when he made deals with his Russian counterpart Vladimir Putin in the Astana process and in Sochi and Moscow. Fulfilling the Sochi accord of September 2018 and the latest Moscow deal could be possible either through persuading the radicals or using force against them.

The first option has failed to bear fruit in the past and, judging by the harsh reactions of the groups, it is not working today either. The second option carries the risk of drawing the enmity of the militants onto Turkey. And any move to herd them into areas that came under Turkish control in operations Euphrates Shield, Olive Branch and Peace Spring threatens to reinforce criticism that Turkey is shielding terrorist groups. Moreover, no matter where those groups withdraw, they are bound to remain as targets that have to be eliminated.

The militants, on the one hand, are grateful to Turkey for stepping up its support, going as far as to clash directly with the Syrian army in late February and early March. Hayat Tahrir al-Sham, for instance, said, “We are thankful to the Turkish government for standing by and supporting the Syrian revolution and taking part in the recent fighting in order to defend and protect the civilians.”

On the other hand, the militants believe that, since joining the Astana process in 2017, Turkey has used the armed movement against the regime to advance its own interests. In a striking appraisal of Turkey’s role, Abu Shuaib al-Masri, a cleric who used to be with Hayat Tahrir al-Sham, said that Turkey has turned the areas it seized in its three military interventions into its own zones of influence and used its control on the ground to push back the Kurds and advance its own national priorities. Turkey’s Syria policy, he argued, has become intertwined with its refugee problem with the European Union, the issue of anti-aircraft systems with the United States and the Libyan dossier with Russia.

Nevertheless, the militants in Idlib have been reluctant to confront the Turkish military as they continue to rely on the benefits of neighboring Turkey, where militants are still able to take refuge, move around and safely harbor their families. Amid the latest escalation in Idlib, many militants have allegedly managed to get their families across the border. And should the armed groups withdraw, that would mean the end of their de facto al-Qaeda emirate in Idlib.

How long could this state of mutual self-restraint continue? In a video circulated March 15, jihadi fighters threatened to attack the joint patrols. And in a carefully worded statement after the Turkish-Russian deal, Hayat Tahrir al-Sham vowed to continue to fight to change the regime in Syria. According to the group, the Moscow accord contains “inapplicable” provisions as well as opaque and ambiguous aspects that “Russia will be able to use for renewed attacks” in the region. “The victory of our revolution will be impossible unless we keep up the struggle against the enemy at any cost. Security and peace in Syria could become possible only by overthrowing that criminal gang,” the statement said, referring to the Damascus government. “The language of force and arms is the sole language that will bear fruit against the invaders,” it added.

As noted above, the Moscow deal provides not for ceasing but keeping fire against the radical groups, so a “non-conflict regime” as imagined by Erdogan could hardly materialize. Seemingly, Turkey is trying to secure and reopen the northern side of the M4 highway, while the southern side is up to the Syrian and Russian forces. On the southern side of the road, beyond the 6-kilometer boundary of the security corridor toward Mount Zawiya, a large area is under the control of armed groups. So, to advance to the road, the Syrian army will likely forge ahead to seize those areas, as evidenced by its pounding of a number of targets in Mount Zawiya a day after the first Turkish-Russian patrols. In sum, there is neither any sign nor a road map suggesting that the parties could fulfill their commitments in Idlib without the use of force.