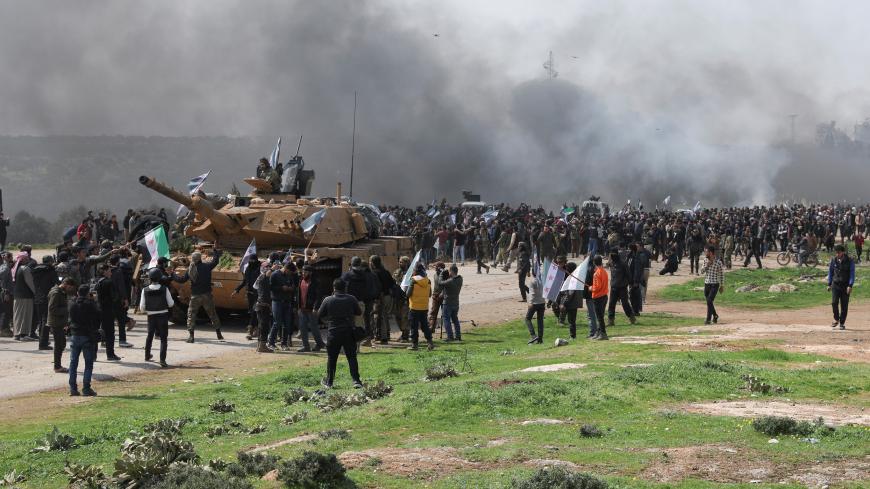 People hold Syrian opposition flags during a protest against an agreement on joint Russian and Turkish patrols at the M4 highway in Idlib province, Syria, March 15, 2020. - REUTERS/Khalil Ashawi

“As part of the preparations for the joint Russian-Turkish patrol of the M4 highway, engineering reconnaissance of the patrol route was carried out in the Saraqeb area,” said Rear Adm. Oleg Zhuravlev, the head of the Russian center for reconciliation of opposing sides in Syria.

On the Russian side, the joint patrol involved a military police platoon on three armored vehicles: an armored personnel carrier and Tiger and Typhoon all-terrain vehicles. The Turkish side deployed three Kirpi armored vehicles. The patrolling mission was arranged by the joint Russian-Turkish coordination center. A special communication channel continues to operate between the Russian Reconciliation Center for Syria and the Turkish military.

The patrol took about half an hour.

“Today the first joint Russian-Turkish patrol took place on the section of the M4 highway in the Idlib de-escalation zone. It went along a shortened route for security reasons. Joint patrolling should not only ensure the safe movement of civilians along the vital arterial road of Syria, but also become a guarantee to prevent the armed conflict's recurrence in the region,” a representative of the Russian military police informed the press immediately after the patrol.

On March 5, the presidents of Russia and Turkey, Vladimir Putin and Recep Tayyip Erdogan, adopted the Additional Protocol to the Memorandum on Stabilization of the Situation in the Idlib De-Escalation Area that provides joint Russian-Turkish patrolling along the M4 from the village of Trumba to the village of Ain al-Havr. The first patrol was supposed to go along a shortened route from Trumba to the city of Arikh. The rest of M4 is unsafe for Russian and Turkish military convoys to pass through as it is under control of the terrorist groups Hayat Tahrir al-Sham (HTS) and the Turkistan Islamic Party (TIP). Earlier, HTS leader al-Julani said he didn't recognize the Russian-Turkish agreements because Russia can't be trusted as guarantor as it works with the regime.

However, even this shortened route was disrupted by opposition from both local civilians and representatives of the pro-Turkish Syrian National Army/National Front for Liberation (SNA/NFL), who staged mass protests and blocked the patrol's movement.

Local sources who spoke with Al-Monitor not for attribution said the residents of the area along with fighters of some SNA/NFL groups believe that the joint patrols are a first step in the surrender these areas to the regime of President Bashar al-Assad.

As the locals noted, the distrust of Turkey on part of some pro-Turkish forces and Idlib-based civilians may stem from leaked Russian military maps that show areas to the south of the security corridor along the M4 highway — that are controlled by the opposition — as being subject to eventual transfer to the Assad regime.

Although there was no indication of such a thing in the Additional Protocol to the Idlib Memorandum, multiple sources in Moscow with knowledge of the situation confirmed to Al-Monitor that the areas south of the M4 highway are to be transferred to Assad’s control in accordance with Russian-Turkish accords.

This seems logical: If a security zone is created along the M4, the fate of the opposition forces based there will be sealed, cut off by the Russian control zone from the rest of Idlib, which is held by other opposition groups north of the M4.

Thus, regardless of success or failure of the M4 patrols, the Russian side along with Assad’s forces will be ready to launch another military operation in Idlib south of the M4 that would lead to actual deployment of the Syrian government forces to the highway and the creation of a security zone along it to the south.

There is no other way to take control of the area south of M4, since the opposition and HTS are unlikely to agree to leave the region without a fight. The Russians and Turks think Assad could try to advance to capture other areas in the Idlib province as he's vowed to bring "every inch" of Syria under government control. However, the implementation of the Russian-Turkish agreements.will not relieve the Turkish side of responsibility for creating its own security zone north of M4.

Ankara currently has the equivalent of a mechanized infantry in Idlib that may exceed the number of militants in radical groups. Therefore, the Turkish side now has many more opportunities to influence HTS than it did after signing of the 2018 Sochi Memorandum. Turkish inaction can no longer be justified and there could be a new round of confrontation between Ankara and Damascus — and, by extension, Moscow.

Nevertheless, even limited joint patrols may spark some optimism that this time all the agreements between Moscow and Ankara will be implemented. Turkey was able to force the HTS militants to leave the first patrol zone between Arikh and Trumba. Now these areas have come under the control of the SNA/NFL forces and the Turkish military and are open for joint patrolling.

Perhaps the Turkish troops will be able to gradually open other sections of the route where the HTS and TIP militants are still operating. However, as noted above, Turkey’s problems may arise not so much with the radicals but with local residents and even some units of the SNA/NFL loyal to Ankara.