Will there be a new military confrontation in Syria’s Idlib?

The possibility of renewed conflict continues to simmer in the war-torn province of Idlib months after Ankara and Moscow reached a cease-fire agreement. 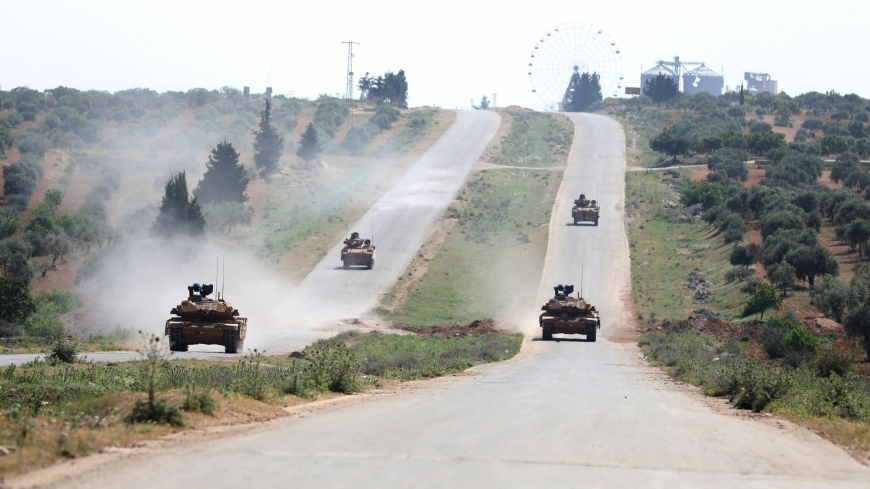 Turkish military vehicles secure the road on the outskirts of the town of Ariha before the passage of a joint Russian-Turkish patrol on the M4 highway between Saraqeb and Ariha in Syria's northwestern Idlib province on May 7, 2020. - OMAR HAJ KADOUR/AFP via Getty Images

On July 23, Russia and Turkey carried out a successful “end-to-end” joint patrol of the M4 highway in Syria, a strategic roadway linking the country’s east and west and passing through the opposition-controlled Idlib province. While this development is an encouraging sign that further de-escalation measures may proceed, the threat of renewed conflict remains.

The latest patrol comes four months after Ankara and Moscow reached a cease-fire agreement in the war-torn province, following March talks in Moscow between Russian President Vladimir Putin and his Turkish counterpart, Recep Tayyip Erdogan. The March 5 agreement — an “additional protocol” to the Sochi agreement — called for the establishment of a security corridor 6 kilometers (about 3.5 miles) north and south of the M4 highway, with joint Russian-Turkish patrols aimed at ensuring the cease-fire.

Through the latest patrols, Ankara has confirmed its commitment to abide by the bilateral agreements on Idlib and demonstrated its readiness to implement further clauses of the agreements. Yet at the same time, despite the existing progress in the fulfillment of the obligations by the Turkish side, instead of a reduction in tension around Idlib, there is a buildup of forces by the Syrian government along the perimeter of this de-escalation zone. This may become a harbinger of the preparation of a new military campaign.

Earlier exchanges of fire between government forces and the opposition took place in this Syrian region. Airstrikes (albeit very limited) by the Syrian army’s air force and the Russian air force resumed, including a strike on the city of al-Bab, located outside the Idlib de-escalation zone in the operational area of the Turkish Euphrates Shield zone.

The transfer of reinforcements by the Syrian army along with the Russian pressure — in the form of airstrikes — can be interpreted as a signal to Turkey to push it to quickly implement the next parts of the agreements concerning the creation of a 12-kilometer security corridor (6 kilometers to the north and 6 kilometers to the south) along the M4 highway. The southern 6-kilometer-wide part of this strip should be controlled by the forces of the Russian military police. Earlier in March, after agreements between Putin and Erdogan to end hostilities in Idlib, the entire area south of the M4 highway, which is now under opposition control, was determined by Russia to be territory that should be located under regime control.

It should be understood that the implementation of the provisions on creating a “Russian part” of the security zone south of M4 can’t happen unless the entire Jabal al-Zawiya region, south of M4 and currently under opposition control, is under the authority of Bashar al-Assad's regime or the control of the Russian military. It is important to consider two points here:

1. Taking into account the difficulties faced by the joint Russian-Turkish patrols of the M4 highway, namely countering the al-Qaeda-linked Hayat Tahrir al-Sham (HTS) and groups controlled by radicals that prevented the patrols, the creation of an entire security zone under Russian control along this highway cannot happen without forceful action to expel radicals from this zone. Otherwise, these groups will carry out constant attacks and terrorist acts against the Russian military, which will find itself in a hostile environment. This is probably also understood in Ankara.

2. The creation of a Russian security lane along the M4 highway would cut off and isolate the opposition and HTS-controlled area at Jabal al-Zawiya, south of this highway. Therefore, the HTS is unlikely to voluntarily transfer this security zone to the control of the Russian military. This means that the safety zone cannot be created without first clearing the entire opposition area located south of M4 of HTS units.

Thus, it cannot be ruled out that the current military preparations of Damascus and Moscow around Idlib are really aimed precisely at the implementation of this specified power scenario. At the same time, under the current conditions, any military operation in Idlib carries many risks for the Assad regime and its allies and could have unpredictable consequences — including the potential for regime forces to end up on the losing side.

This is due to Turkey's large-scale military deployment in Idlib. The experience of the previous military operation in this region showed that even the limited participation of the Turkish army in supporting the opposition can radically change the balance of power and turn the Syrian government army from an attacking party to a defensive one. Therefore, in the current situation, the main issue remains the reaction of Turkey, which has significantly increased its grouping in the greater Idlib area, including in the Jabal al-Zawiya region south of M4.

An operation not coordinated with the Turkish side may lead to a new round of armed confrontation between Ankara and Damascus with unclear prospects. Thus, the threat of incidents between the Russian and Turkish militaries is growing, especially taking into account the Turkish medium-range air defense systems deployed in Idlib, which can accidentally hit Russian combat aircraft.

It cannot be ruled out that Turkey could refuse to surrender to the regime force areas south of M4, which were already marked on Russian maps as belonging to Assad, as it would like to use them as leverage to strengthen its own positions east of the Euphrates in the future. That is, Russia and the Syrian regime may be given the opportunity to freely seize the Jabal al-Zawiya region in exchange for the possibility of expanding (or rather lengthening) the Turkish security zone in eastern Syria. Such an "exchange" would correspond to the spirit of the previous Russian-Turkish deals on Idlib, when, in exchange for the seizure of part of the territory of this Syrian region by the forces of the regime, the Turkish side could conduct operations against the Syrian Kurds, creating its own "protectorates" in the regions they had taken.

However, in this case, two problems arise. The first concerns the fact that the very withdrawal of Turkish military bases from Jabal al-Zawiya may be presented by Erdogan's opponents as another Turkish retreat in Syria and will negatively affect the image of the Turkish leader. Keep in mind that all of Ankara's demands regarding the unblocking of Turkish observation posts and the return of the demarcation line to those borders set by the 2018 Sochi memorandum have not been met and are unlikely to ever be. And to leave a few more strongholds surrounded by the regime's forces would be even more humiliating for the Turkish side. Second, any changes to the configuration of the Turkish security zone east of the Euphrates must be negotiated with the United States, which still controls the airspace over these Syrian regions, and agreements with Russia alone are not enough.

Therefore, there is also a real chance of a scenario in which a new military operation in Idlib will be avoided. Russia may refuse to support Assad and this time will not give in to pressure from Damascus to launch a new offensive in Idlib, due to the significant risks associated with the Turkish military presence in the region. Moscow may give Ankara time to continue its efforts to counter radical elements in Idlib, where the Turkish side has achieved some success in this regard.

Thus, Ankara is using fighters from HTS — which is becoming more and more dependent on Turkey — to wage a successful struggle in Idlib against branches of al-Qaeda operating in this region, led by the Hurras al-Din group, into which the most radical HTS militants defected.

After these terrorist factions are finally destroyed, Turkey will be able to begin to eliminate the HTS itself. It cannot be ruled out that this will be done by integrating the individual groups that make up the HTS into the ranks of the pro-Turkish Syrian National Army. The most radical core of this terrorist group will be destroyed. Otherwise, under Turkish pressure, the HTS should become much more susceptible to signals from Ankara and will sooner or later be forced to withdraw its forces both from Jabal al-Zawiya, transferring this area to pro-Ankara opposition forces, and the 12-kilometer safety zone along the M4 highway, allowing Russia and Turkey to take control of it.

Finally, it cannot be ruled out that Russia and Turkey will decide the future of Libya and Idlib in one "package" agreement. For example, in exchange for Ankara's refusal to support Libya's Government of National Accord in the attack on Sirte and Jufra, Moscow will reject all of Assad's plans for attempts to launch a new military campaign in Idlib.