Jihadi forces resisting the reopening of the key M4 highway in Idlib are squeezed between Turkey’s amity and military might, but Turkey itself is not without dilemmas. 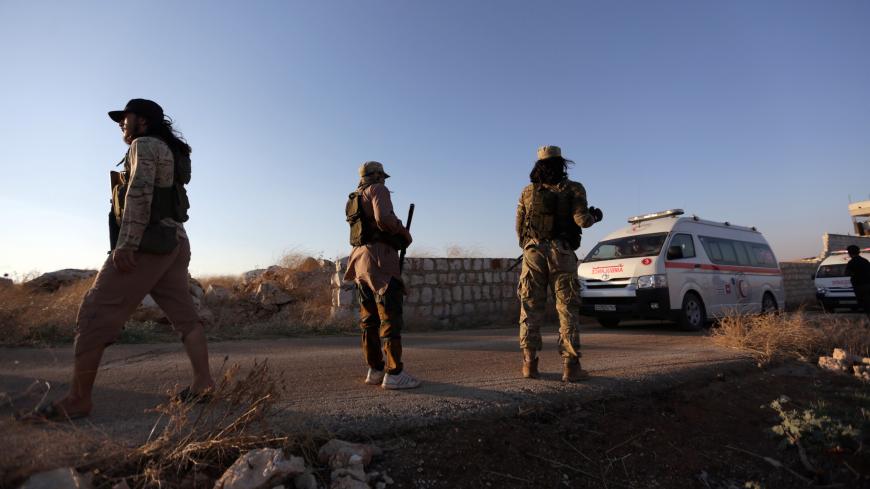 An ambulance passes Islamist rebels from Hayat Tahrir al-Sham outside the villages of al-Foua and Kefraya, Syria, July 18, 2018. - REUTERS/Khalil Ashawi

Tensions on the key M4 highway in Syria’s rebel-held province of Idlib have climbed to new levels, creating dilemmas for both the jihadis dominating the region and Turkish forces seeking to reopen the road under a deal with Russia.

Efforts to reopen the M4 — a key requirement of the deal that Turkey and Russia sealed March 5 in Moscow — led to deadly unrest April 26 as Turkish forces took on a crowd that barricaded the highway outside a village near al-Nayrab. In the wake of the killing of two Turkish soldiers in a March 19 attack in the area, the Turkish forces opened fire on the crowd, which pelted the soldiers with stones after an initial attempt to disperse it with tear gas. Two people were killed and several wounded in the confrontation, which was followed by a mortar attack on a Turkish outpost in al-Nayrab that left several soldiers injured. In response, Turkish drones hit two emplacements of Hayat Tahrir al-Sham, the radical group dominating Idlib, and a vehicle. HTS lost two men.

The Moscow deal calls for joint Turkish-Russian patrols along M4. Since March 15, five attempts to conduct them have failed.

Following the latest flare-up, Turkish military and intelligence officials met with a HTS delegation in a bid to defuse the tensions and talk the group into a peaceful reopening of the M4. The delegation was reportedly told that attempts to block the road would play into the hands of the regime and that continued tensions would raise the risk of territorial losses for rebel groups in the region. The Turkish military reinforced its observation posts and airdropped leaflets to residents, in which it described its goal as preventing military action in Idlib, facilitating the return of displaced civilians and reviving economic activity by reopening the M4 and M5 highways. “Do not believe … those who want to deceive you and spread sedition among brothers,” the text read.

HTS has put on appearances of willingness to cooperate with Turkey, while raising the prospect of opening commercial crossings to regime-held areas at Saraqeb, Atarib, Maarat al-Nasan and Miznaz. Yet such crossings are not directly related to the reopening of the M4 and HTS remains involved in the resistance on the road, which its media arm calls “honor protests.”

Armed groups allied with Turkey accuse HTS of undermining the Moscow deal. Syrian National Army (SNA) leader Mustafa Sejari, for instance, blamed HTS leader Abu Mohammad al-Golani for the latest confrontation on the M4. Turkey has been coordinating its moves with the “revolutionary” forces, he tweeted, adding that Turkey’s actions aimed “to protect millions of civilians and prevent losing more areas in Idlib because of Golani’s military dominance.” Some other rebels, meanwhile, accuse HTS of playing a double game, acquiescing to the reopening of the road and betraying the revolution. In short, the situation on the rebel front is highly complex.

The rifts among the rebels have to do not only with their fears of losing control in “liberated” areas, but also with changes in the economic status quo. Many believe that the reopening of M4 would advance Russian strategies to expand the control of the Syrian army, pointing to how the Astana process, which shaped the Russian-Turkish partnership, has been marked by opposition defeats on key fronts such as eastern Aleppo, eastern Gouta, Quneitra and Daraa. The armed opposition’s waning grip over M4, atop its loss of the M5 in February, has been changing the balance of power, both military and economically, although the economic debate has drawn less attention.

According to an HTS associate responsible for crossings, 95% of the goods that currently enter Idlib are from Turkey and only 5% from government-controlled areas, compared to 35% from Turkey and 65% from government-held areas three years ago. Idlib has a certain production surplus, particularly in agriculture, but only 10% of those products are being sold to Turkey, according to the official. The opening of commercial crossings would enable the shipment of Idlib’s products to other regions, reviving trade and reducing dependence on foreign aid.

Though traders and producers are eager to see commercial crossings open, others oppose such moves, arguing that Idlib’s products, grain in particular, would go to regime areas, leading to an increase in prices. HTS has tried to separate the debate on commercial crossings from the issue of reopening the M4 and has said the matter could be set aside in case of any adverse developments. Still, the debate shows that HTS has recognized it will sooner or later lose control of the M4, its main source of revenues, and is already seeking to set up “customs points” on routes leading to Idlib’s towns to preserve its revenues.

The resistance on the M4 also has to do with how armed groups see their future in battlefield arrangements controlled by Turkey. Turkey’s plan is to merge rival factions into a joint army and turn the M4 into a new barrier for Damascus’ forces. The plan would require HTS to disband and join the new force.

Once the M4 is reopened, the Turkish military will control the northern side of a security belt with a depth of six kilometers (nearly four miles) on either side of the road, while Russian forces will be in charge of the southern section. For HTS, such a setup means a major setback on the ground. The group is unwilling to confront Turkey, but at the same time, it is averse to accepting the control of the Turkish military or the SNA’s entry into Idlib. Such concessions, HTS fears, could lead the group to split up and eventually lose all control on the ground.

In 2018, HTS defectors who quit over what they saw as concessions to Turkey gathered under the banner of Hurras al-Din. A fresh rift has now emerged between pragmatist and radical wings and some prominent HTS figures have already left the group. The rift might grow in the coming days, much to the delight of the SNA, which sees the reopening of the M4 as an opportunity to wipe HTS from the battlefield.

The showdown presents dilemmas for Turkey as well. If the onus eventually falls on Turkey to uproot the jihadis by force, the Turkish military might face greater risks in securing the areas it controls. Moreover, a much-feared boomerang scenario might come true — that is, the factions that Ankara has backed or turned a blind eye to in the nine-year Syrian war might turn against Turkey. Hence, Ankara is now seeking to make the most of its persuasive power while dangling the option of force.