Syria’s economic collapse is stoking the struggle over commercial routes between government-held areas and US- and Turkish-backed enclaves, fueling also disagreements on humanitarian aid. 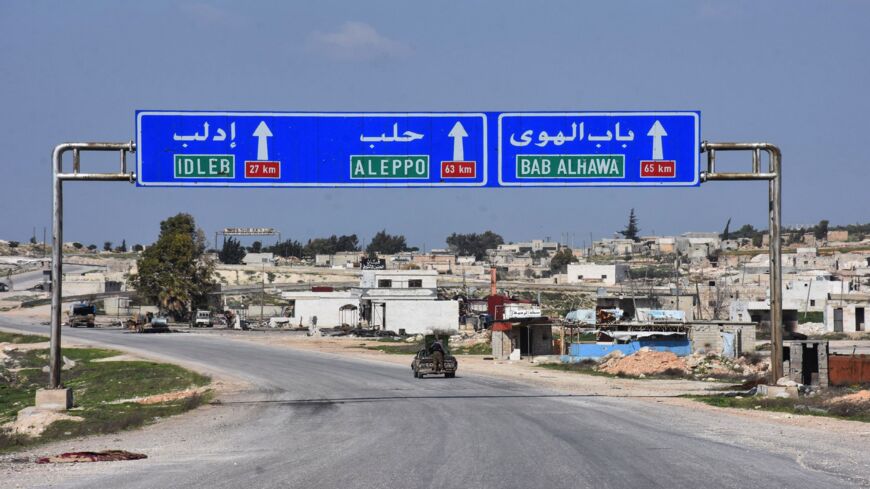 Syrians drive in the town of Saraqeb along the main Damascus-Aleppo (M5) highway in Syria's northwestern Idlib province on March 7, 2020, following a Russian-Turkish cease-fire deal. - AFP via Getty Images

Tensions in Syria are increasingly marked by a struggle for the control of economic routes, as the country’s economic crisis is exacerbated amid shortages of even basic goods such as bread, fuel queues stretching for kilometers, and mounting calls for the reopening of border crossings to facilitate humanitarian aid.

The Russian and Syrian militaries pounded a series of crucial targets in Turkish-controlled areas in northern Syria in March, including rudimentary refineries and tanker parks in Jarablus and al-Bab, a parking lot for trucks carrying goods at the Bab al-Hawa border crossing, a similar commercial area and a gas facility in Sarmada.

Meanwhile, movement has been restricted again between government-held areas and the region to the east to the Euphrates River, which is controlled by US-backed Kurdish-led Syrian Democratic Forces (SDF). The attacks on economic facilities to the west are of concern for the Kurds as well, for SDG-controlled Hasakah and Deir ez-Zor are the source of the oil processed in refineries in the targeted areas.

Amid the escalation, Turkey and Russia were negotiating the opening of three crossings in the Idlib de-escalation zone, both for commercial and humanitarian use. The two sides have long failed to make progress on reopening the key M4 highway in the region. The crossings under discussion included one at Saraqeb, a town in eastern Idlib that sits on the intersection of the M4 and M5 roads; one at Miznaz in Aleppo’s southwestern countryside; and another in the Abu al-Zendin area south of al-Bab. The deputy head of the Russian Defense Ministry's Center for Reconciliation in Syria, Alexander Karpov, announced on March 24 that an agreement had been reached to open all three crossings, but Turkish officials denied the deal.

As the uncertainty lingered, Karpov said on March 30 the crossings were closed until the situation stabilized, citing “provocative” attacks by armed groups impeding the movement of civilians and vehicles. According to Turkish officials, quoted by the state-run Anatolia news agency, no crossing had been opened in the first place. Russia has been pressing for the reopening of commercial routes as part of efforts “to extricate the Assad regime from the economic crisis,” Anatolia wrote, adding that Moscow was making false statements about a deal in a bid to “pressure Turkey and the [Syrian] opposition.”

Russian efforts to reopen routes in the de-escalation zone have been underway since the Moscow accord that Russia and Turkey reached on March 5, 2020, after a violent showdown in the rebel-held region. In the 10 months leading up to the standoff, Russian-backed government forces had recaptured the M5 highway and several crossings from Hayat Tahrir al-Sham (HTS), the main Islamist group holding sway in Idlib. Keen to compensate for lost revenues, HTS reportedly agreed to the inauguration of crossings at Saraqeb, Atarib and Miznaz, but the plan was suspended in May amid protests by opposition groups.

In the ensuing months, fresh US sanctions on Syria, including moves to hamper fuel shipments to Damascus, and Turkey’s decision to put its currency in circulation in areas under its control, reinforced fears in Damascus that its adversaries were bent on collapsing Syria economically.

An Aleppan journalist who requested anonymity due to security concerns said that despite the failure to open new crossings and the recent decrease in movement between regions, the flow of goods continued. “This is something that both the armed groups and the government desire,” he told Al-Monitor. A “de facto free trade zone” has emerged in Sarmada, an HTS-controlled town near Idlib’s border with Turkey, the journalist said. Turkey, he added, has been seeking to make Jarablus, another border town to the northeast, a similar commercial hub so that Turkish-backed factions could benefit more. According to the journalist, “Goods coming from Lebanon or via the Latakia port make their way to Sarmada as well. Also, hard currency is entering Syria from Idlib and Jarablus. Payments are made in dollars for goods coming from other regions. In sum, the Syrian government benefits from the passages.”

Due to Turkey’s own economic woes, the flow of Turkish goods to Syria has increased, drawing hard currency to Turkey, the journalist observed. Moreover, he said, oil shipments from Kurdish-held areas have been flowing to refineries in Jarablus and al-Bab, while goods from the commercial hubs along the border in the northwest have been making their way to the Kurdish-held areas in the northeast. “It is a two-way flow from which everyone takes a share. In this context, I believe the bombings [of economic facilities] carried a message to the Kurds as well. Had they not halted oil supplies, the gasoline queues in government areas would not have grown that big,” he said.

Omer Celenk, an economist from Afrin, believes Turkish-backed groups and Turkey itself are the primary recipients of the message of the bombing raids. “Russia’s message has to do with its desire to control al-Bab and the south of the M4 road. It aims to put pressure on Turkey,” Celenk told Al-Monitor. “Russia is apparently trying to control the borders and commercial movements in a bid to ease the economic crisis in the government-held areas,” he said. Meanwhile, he added, the government’s closure of crossings to Kurdish-held areas is a tool of pressuring the Kurds.

Under the Moscow deal, Turkey assumed commitments to reopen M4, a vital link between Aleppo and Latakia, create a safe corridor extending to 6 kilometers (3.7 miles) on either side of the road and remove armed groups from the area. Those commitments remain unfulfilled amid ongoing Russian pressure to reopen the highway.

Russia, however, seems to be trying to alter not only the economic outlook but the whole status quo of “liberated areas” outside Damascus’ control. From Russia’s perspective, the flow of humanitarian aid to those areas in the northeast and the northwest is only reinforcing the status quo. It argues that the assistance ends up fostering terrorist groups, while civilians turn into virtual hostages in their hands.

At the UN Security Council in July 2020, Russia and China blocked a proposal to facilitate the flow of humanitarian aid by reopening the al-Yarubiyah crossing between the SDF-controlled enclave and Iraq and the Ramsa crossing with Jordan and extending the use of two border crossings with Turkey — Bab al-Salam in Azez and Bab al-Hawa in Idlib — after the United States rejected Russia’s condition to ease sanctions in return. As a result, only Bab al-Hawa remains open — until July 10.

US Secretary of State Antony Blinken renewed calls for the reopening of al-Yarubiyah and Bab al-Salam at a Security Council meeting on March 29. According to Russia, however, “Keeping the cross-border mechanism will also mean keeping supporting terrorists who are living on what they have extorted and also on how they are controlling smuggling,” as its UN envoy, Vassily Nebenzya, said in February.

Damascus denies work permits to charities that do not coordinate their activities with the government. Russia insists on a humanitarian aid strategy that will encompass the whole country and make sure the aid flows via Damascus, thus reasserting the legitimacy of the Assad government.