Is Turkey planning to curb radicals in Idlib under strategy shift?

In a scenario that invokes its Afrin operation in 2018, Ankara speaks of reining in radical groups and asserting field control in Idlib, hoping that Moscow will give it a nod to avoid war. 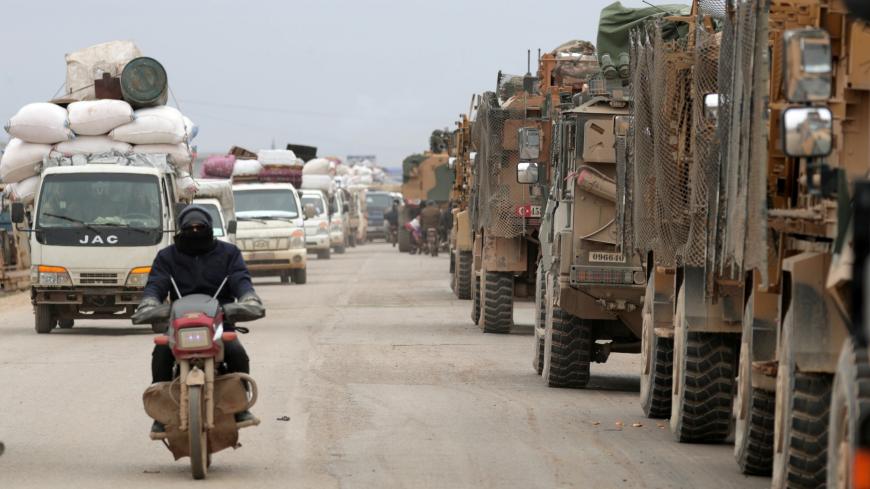 A man rides on a motorbike past Turkish military vehicles in Hazano near Idlib, Syria, Feb. 11, 2020. - REUTERS/Khalil Ashawi

Turkish Defense Minister Hulusi Akar has issued an unusual warning to armed groups holding sway in Syria’s province of Idlib, raising questions as to whether Ankara might try a strategy shift to halt the Syrian army’s advance in the region. “We are sending additional troops to secure and maintain the cease-fire [in Idlib]. We are going to control the area,” Akar said Feb. 13, referring to the cease-fire agreed upon between Ankara and Moscow last month. “Force will be used against those disobeying the cease-fire, radicals included. All measures will be taken,” he added. The warning came as Turkish military reinforcements poured into Idlib and Washington appeared to prod Ankara to press ahead in Syria, while Russia expected Turkey to gear down.

Turkish-Russian talks on the situation in Idlib have remained inconclusive and while Washington made a pledge to “stand by our NATO ally,” this failed to produce anything concrete when special envoy for Syria James Jeffrey visited Ankara on Feb. 12. In the meanwhile, regime forces continued to advance in Idlib despite a warning by Turkish President Recep Tayyip Erdogan that Turkey would intervene unless they return to the demarcation line of the Sochi deal by the end of February. The boundaries Erdogan refers to were outlined as a “de-escalation zone” at the Astana summit in May 2017 and then Turkey and Russia agreed on conditions on the modus operandi in the zone as part of the deal they reached in September 2018 in Sochi, Russia.

After fully securing the M5 highway, the Syrian army made a surprise move by turning to Atarib, a town on the road to Bab al-Hawa, the main supply crossing on the Turkish border, rather than advancing on the M4 highway. The Turkish army’s deployment strategy, meanwhile, has focused on Idlib city. More than 2,000 Turkish vehicles and 6,500 troops have reportedly poured into Syria since early February. The risk of confrontation between the Syrian and Turkish militaries has notably heightened.

Akar’s statement conjures up several possibilities as to what strategy Turkey might pursue down the road.

First, Akar’s warning about reining in radicals could be seen as a signal of a return to the Sochi deal. With 10 of its 12 observation posts surrounded by the Syrian army, Turkey might try its hand at drawing a new cease-fire line with Russia as forcing the Syrian army to retreat would now require a full-fledged war. Negotiations with Russian delegations in Ankara and phone calls between the leaders of the two countries have failed to yield results thus far. Although the contacts are seen as a positive sign alleviating the risk of confrontation, the situation on the ground could spiral out of control any time. Moreover, any expectation that the contacts could lead Russia to leave the control of Idlib to the Turkish army, as was the case in Afrin, is overly optimistic. Moscow shows little flexibility this time and Damascus looks really determined.

Second, Akar’s statement could be equally read as a sign that Turkey is now prepared for a direct war and would seek territorial control instead of just holding certain locations. This would require curbing the role of disorderly proxy forces or Islamist groups focused on their own agendas and bringing more Turkish soldiers to the field. Some analysts are already advising the government to change strategy to assert territorial control.

Yet territorial control does not mean giving up on proxy forces. The 40-plus motley factions that Turkey brought together under the banner of the Syrian National Army remain a major element of Ankara’s Syria policy. Similarly, there is no clear sign that Turkey has given up on the National Liberation Front, which includes former al-Qaeda militants and has a predominantly jihadi character. Furthermore, when it comes to Hayat Tahrir al-Sham, which Turkey lists as a terrorist organization, it is rather dubious that Turkey would abandon its flexible attitude toward the group and start treating it as an enemy.

At present, Hayat Tahrir al-Sham is a de facto ally of Turkey on the ground. Pressure to “moderate” the group since it took control of Idlib in 2015 has led it to rename itself from Jabhat al-Nusra to Hayat Tahrir al-Sham, withdraw its pledge of allegiance to al-Qaeda and look like a faction without global jihadi ambitions that is focused on an armed struggle limited to Syria.

Still, Hayat Tahrir al-Sham has lost nothing of its jihadi core that seeks a state based on Sharia law. Moreover, since the Sochi deal between Turkey and Russia, Hayat Tahrir al-Sham has come to control 90% of Idlib, displacing factions that Ankara had incorporated into the Astana process. The group will not lose its jihadi character even if it rebrands itself again and joins the National Liberation Front under Turkish pressure, depending on developments on the ground in the coming period. Such a merger could only strengthen the Islamist character of the camp that Turkey supports in Idlib. Even some of the groups treated as more reasonable because of Turkey’s support have adopted the Islamic State flag as a symbol on their arm badges.

Akar’s statement could be seen also as an effort to rebut accusations that Turkey is shielding terrorist groups. Ankara has neither managed to isolate radical groups as the Sochi deal required nor really treated Hayat Tahrir al-Sham as a national security threat thus far. Erdogan reiterated his stance Jan. 29, when, in response to Russia’s argument that it was fighting terrorism, he said, “Are those defending their own land terrorists? They are resistance fighters.”

Regardless of what Ankara’s intentions are, its latest intervention in Idlib has put the Turkish military on the same side with Hayat Tahrir al-Sham and its allies. Although some Syrian National Army elements have moved from Turkish-controlled Afrin to the Idlib front, Hayat Tahrir al-Sham has been the main group fighting the recent battles in which the Syrian army captured key towns such as Maaret al-Numan, Saraqib and Taftanaz. Then comes the National Liberation Front. In the countermoves in Saraqib, Nayrab, Taftanaz and Rashidin, where Turkey provided firepower support in a bid to stop the Syrian army, the National Liberation Front was in the forefront, along with Hayat Tahrir al-Sham. Central Asian groups were present in the Feb. 2 countermove at Jamia al-Zahra in the Aleppo countryside, which began with three suicide attacks by members of al-Asa’ib al-Hamra, the Hayat Tahrir al-Sham striking force. Similar collaboration was seen in the Feb. 4 attacks at Khan Tuman. Also, Hayat Tahrir al-Sham has had a strong presence in al-Eis, where one of Turkey’s observation posts is located. Hayat Tahrir al-Sham and its allies also led the Feb. 10 counteroffensive on Saraqib, which was backed by Turkish artillery fire.

On Feb. 6, a field commander of Ansar al-Tawhid was among the militants the Syrian army killed at the Dadikh and Nayrab fronts, indicating that al-Qaeda-linked factions have been actively involved in the fighting. And the counterattack launched with Turkish backing in Saraqib on Feb. 11 was led by Hayat Tahrir al-Sham, the National Liberation Front and the Turkistan Islamic Party

Hayat Tahrir al-Sham and its allies stand out in the death toll as well. According to the Syrian Observatory for Human Rights, out of 545 fighters killed in the clashes from Jan. 24 to Feb. 10, 405 were jihadis. Hayat Tahrir al-Sham leader Abu Mohammad al-Golani said his group has been waging “at least 75%” of the battles going on in the region.

In fact, the distinction between moderates and radicals often becomes irrelevant in such circumstances. Some 500 fighters from the Nureddin Zengi Brigade, which Hayat Tahrir al-Sham had ousted from the outskirts of Aleppo last year, have returned to the battlefield rebranded as the al-Majd Platoon following a deal that was reportedly brokered by Ahrar al-Sham at the behest of Turkish intelligence. Hayat Tahrir al-Sham, meanwhile, rejects allegations that it is preventing Turkish-backed groups in the Olive Branch enclave from joining the battles in Idlib.

Of note, factions such as the Mutassim Brigade, the Sultan Murad Division, the Hamza Division, Faylaq al-Sham and the Samarkand Brigade, which collaborated closely with Turkey in sending fighters to Libya, have been heard little of in the Idlib battles.

The members of the National Liberation Front may be touted as “moderates,” but for Russia, they are no different from Hayat Tahrir al-Sham. If the Hayat Tahrir al-Sham media arm is to be trusted, the Jan. 29 ambush in the Jabal al-Akrad area in which four Russian soldiers died was the work of the National Liberation Front. It was an incident that Russia brought up to Turkey after eight Turkish servicemen were killed Feb. 3 in Saraqib.

The more the fighting in Idlib moves closer to the Turkish border, the more it approaches areas that are fully under Hayat Tahrir al-Sham control. Hence, one cannot help but wonder how Turkey is going to confront the groups with which it has actively collaborated since late January.

While Hayat Tahrir al-Sham remains the largest jihadi Salafi body, could it be that by “radicals” Akar means only smaller groups such as the al-Qaeda-linked Hurras al-Din, Ansar al-Tawhid (formerly Jund al-Aqsa) and Ansar al-Islam, the Taliban-inspired Turkistan Islamic Party of Uighur fighters, the Chechen-led Ajnad al-Kavkaz, the Uzbek Imam Bukhari Brigades or the predominantly Uzbek-Kyrgyz Tawhid and Jihad Brigades? Although those groups are based mostly in the Jisr al-Shughur area and the Latakia countryside, some of them have been collaborating with Hayat Tahrir al-Sham in western Aleppo and southern and eastern Idlib. Erdogan has been cautious on factions of Central Asian origin, wary of annoying his nationalist and conservative bases at home.

Yet given the momentum the Syrian army has attained and the existing international climate, neither partnership with those groups nor curbing them to assert territorial control seem to be a sustainable solution.