Turkey is reportedly planning to forge a unified militia army in Idlib, but discord among armed groups and the clout of jihadi factions stand out as major stumbling blocks in the way of the new game plan. 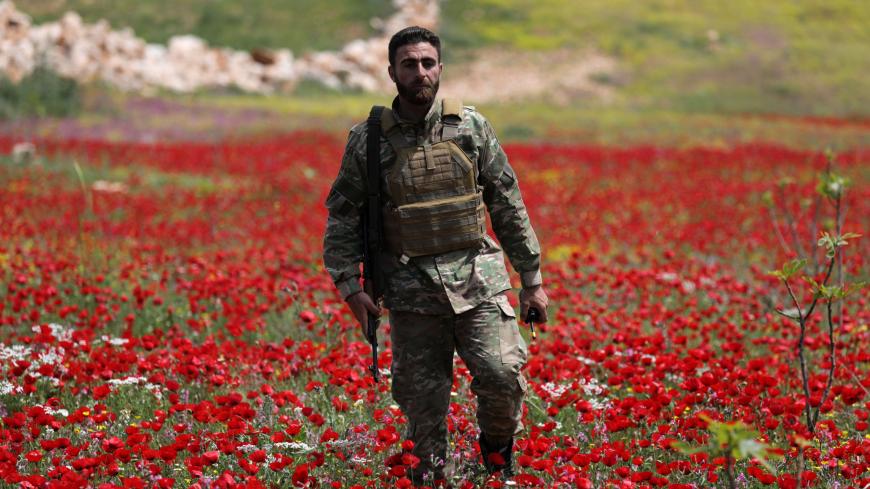 Ever since early March, when Russia and Turkey sealed a deal on Idlib, it's been an open question as to how Turkey will force the armed groups controlling the last rebel stronghold to toe the line. Since then, Turkey has doubled its military presence and, according to Syrian opposition sources, has a new plan to merge rebel factions into an “organized army” under the control of the Turkish military.

Turkey has responded in a lenient and controlled manner to protesters hampering Turkish-Russian patrols on the M4 highway, suggesting that Turkey prioritizes a silver-tongue approach. In the Moscow deal, however, Turkey renewed its commitment to eliminating terrorist groups. Yet the plan to transform armed groups into an “organized army” involves some of the factions on the target board in Idlib.

In December 2017, Turkey gathered various groups under the umbrella of the Syrian National Army (SNA) as it sought to tidy up the field after Operation Euphrates Shield and to turn the armed opposition into an interlocutor in the Astana process. Factions that remained outside the SNA formed a coalition, called the National Liberation Front (NLF), in May 2018. In early October 2019, as Turkey geared up for an offensive east of the Euphrates, a total of 44 factions from the two groupings teamed up under the SNA umbrella. Yet the factions have retained their own setups, commands and flags. Though attached to “the defense ministry” of the opposition’s interim government, the SNA lacks a real chain of command. It is an army only in name.

Under the new plan, armed groups are reportedly expected to disband and join the new army.

According to Syrian opposition sources, Turkey is drawing fighters from various groups in Idlib to its military outposts, with 300 fighters to assume integrated action with Turkish forces at each base. The initial goal is said to be an “organized army” involving SNA and NLF factions. A successful completion of this stage would be followed by an effort to get Hayat Tahrir al-Sham (HTS), the dominant group in the region, to disband and join the new army.

Naturally, HTS' response to the plan is of crucial importance. Thus far, the group is cautious to not have a falling out with Turkey, despite in-house rifts and concerns about a “Turkish occupation.” At the same time, Syrian media have accused HTS of orchestrating the resistance on the M4. HTS is also reportedly reinforcing its positions in some areas. On April 14, HTS commanders ordered the creation of three new brigades.

HTS is also averse to Turkey-backed groups gaining clout in Idlib. The group briefly detained a commander of Faylaq al-Sham along with 10 of his men in Saraqeb on April 13. This was believed to be a response to Faylaq al-Sham accompanying Turkish forces to break up a sit-in on the M4. Such moves are signs of HTS resistance to any changes in the status quo in Idlib.

Nevertheless, HTS has maintained cautious public diplomacy with Turkey, rejecting accusations that it is behind the protests blocking the M4. In an April 15 statement, the group denounced a video of militants from an unidentified group ridiculing Turkish soldiers and threatening to behead them. “The Turkish army has been a partner of the Syrian revolution in the war against the criminal regime and its allies,” HTS said.

The Syrian war has seen myriad attempts to unite armed factions, either in umbrella groups or joint operation rooms. The most remarkable endeavor, perhaps, was the Army of Conquest, which captured Idlib, but its two main components — Jabhat al-Nusra and Ahrar al-Sham — turned on each other afterward.

Today, the situation is more serious. Turkey is in a position to impose its terms, as all groups in “liberated” Idlib know the end of the road is near. Still, the plan for an integrated army is a tall task. Creating an army from predominantly jihadi factions that are ideologically troublesome and steeped in bad blood is betting on the impossible. Turkey has failed to prevent fighting between allied militias, even in regions under its control. The most recent skirmishes took place April 14 in Jandiras in the Afrin region, and again April 16 in al-Ghandourah in the northeastern Aleppo countryside.

HTS has been unwilling to share Idlib with Turkey’s allies, and it remains to be seen how it will respond to the plan. HTS' reaction aside, what does the plan envisage for Hurras al-Din — the coalition of groups pledging allegiance to al-Qaeda and its inspired factions such as Ansar al-Din, Ansar al-Tawhid and Ansar al-Islam? What about the Taliban-affiliated Turkistan Islamic Party, the Chechen Ajnad al-Kavkaz and the Uzbek Imam al-Bukhari Brigade? Those groups show no intent of submitting to any Russian-Turkish deal.

Turkey is bound to come to loggerheads with Russia again if its way of eliminating terrorist factions — as designated by the UN Security Council — boils down to an attempt to rebrand and unify those factions.

No doubt, such an effort buys Turkey time. Though Russia is aware that the deal is not working and the rebels are gaining time to recuperate, it prefers, for now, to keep tensions manageable. Its ultimate expectation remains the dissolution of those groups so Damascus can again control the region.

Turkey’s new plan amounts to protracting the armed insurgency and involves some open-ended calculations. It shows that Turkey wants to use the factions entirely for its own interests and has no intention of withdrawing from the Idlib outposts and from border areas of a 40-kilometer (25-mile) depth. Turkey hopes to transform its section of the security corridor along the M4 into a new roadblock for the Syrian army once the highway is reopened. The ensuing objective would be to control the whole area from the M4 to the Turkish border, in collaboration with a unified army of militias. This, in a sense, would mean a replication of the Turkish military, civilian and administrative setups in the Euphrates Shield and Olive Branch pockets.

Moreover, a militia army integrated with the Turkish military might alter the character of the Syria crisis, transforming it into a full-fledged state-to-state conflict.

Whether the planned army materializes or not, the rebels are already preparing for the next battle in coordination with Turkey. According to SNA spokesman Naji Mustafa, armed groups are using the lull in Idlib to set up camps across the region and draw up assault and defense plans. The rebels, he said, have been coordinating with Turkish forces, which have stepped up their own reinforcements in the region.