Why are Turkey’s allies fighting each other in Syria?

Turkey’s handling of recent clashes between allied groups in Syria has called its intention into question, with some arguing that the jihadi outfit controlling Idlib has gained a foothold in Afrin by using a Turkish-linked group as a Trojan horse. 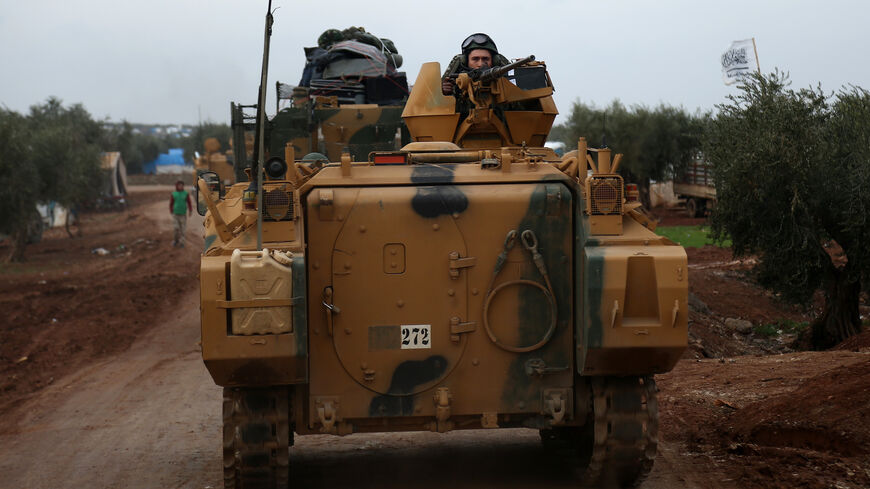 A Turkish soldier mans a turret on an infantry fighting vehicle driving near the village of Yazi Bagh, about six kilometers from the Bab al-Salamah border crossing between Syria and Turkey in the north of Aleppo province, on Jan. 21, 2018, with the flag of the Ahrar al-Sham brigade seen flying in the background (R). - NAZEER AL-KHATIB/AFP via Getty Images

Before Turkey could make good on its threats of a fresh military thrust in Syria, the rebel groups it relies on have gone to war with each other, raising doubts about how capable they are to help Turkey realize its plans for a safe zone along the border.

Despite subsequent mediation efforts, Turkey’s initial inaction in the face of the clashes and the fact that the hostilities play into the hands of Hayat Tahrir al-Sham (HTS), the jihadi group controlling Idlib, have sparked further questioning and speculation.

After Ankara threatened to seize Kurdish-held Tel Rifaat and Manbij in northern Syria last month, the Syrian National Army (SNA) – a loose alliance of Turkish-backed armed factions – conducted military exercises under Turkish guidance and reinforced frontlines, declaring it is ready for orders to press ahead. Yet, the infighting calls into question how united its members are for a battle.

A row between Ahrar al-Sham and the Sham Front is at the center of the crisis, which erupted into a big confrontation last week, with fellow SNA factions standing by the Sham Front, and the HTS, a designated terrorist group, backing Ahrar al-Sham. The Sham Front attacked Ahrar al-Sham in several locations in al-Bab countryside on June 18, seizing the outposts of the group’s eastern forces, known as Ahrar al-Sham-Eastern Sector, and taking 50 of its members captive. The clashes quickly spread to Jarablus. The Sham Front tried to expel Ahrar al-Sham militants and their families from Afrin as well. All three areas are in regions controlled by Turkey and its allies.

In response, Ahrar al-Sham, backed by HTS, marched through the crossing separating the rebel forces of Idlib and Afrin and seized multiple areas in Afrin’s southern and southwestern countryside. The SNA factions were forced to retreat all the way to Ain Dara and Qarzihel, just 7 kilometers (4 miles) away from Afrin city. Faylaq al-Sham and Ahrar al-Sharqiya were among the retreating forces, but some reports claim they were reluctant to fight. Turkish troops positioned in rural areas were recalled to their main base during the clashes, in which tanks and howitzers were used.

A cease-fire was secured on June 19 after Turkey’s National Intelligence Organization (MIT) stepped in. The deal required the parties to move back to their pre-fighting positions, including the return of Ahrar al-Sham’s headquarters and the release of captives. Whether those terms have been implemented is yet to be confirmed. There were reports on June 20 that HTS sent fresh reinforcements to the villages of Basufan and Fafratin in the Afrin area, which are known as Faylaq al-Sham’s zone of control.

Ahrar al-Sham, founded by former al-Qaeda members, has been plagued by divisions since its defeat in a fierce war with HTS in Idlib in 2018. Jaber Ali Pasha, a leading figure in the group, is close to Turkey, while his internal rival, Hassan Soufan, remains on friendly terms with HTS leader Abu Mohammed al-Golani. Soufan reportedly had Golani’s backing when he attempted to seize the group’s leadership in 2020. Pasha resisted, and the deepening rift prompted MIT to intervene. After months of wrangling, the two rivals stepped back in January 2021 to let Amer al-Sheikh assume the leadership. Though Ahrar al-Sham was among the primary recipients of Turkish backing in its heyday, it has remained somewhat autonomous due to its Salafi-jihadi character.

Its current enemy, the Sham Front, is relatively closer to Turkey, being the successor of al-Tawhid Brigade, a group created with Muslim Brotherhood support in the early days of the armed uprising in Syria. Among Islamist factions, the Brotherhood-affiliated Faylaq al-Sham is arguably the closest to Turkey.

The factions that Turkey brought together under the SNA umbrella include Turkmen groups as well as outfits with no ideological basis, but its relationship with Islamist groups has always been more special. Some of those groups see the Astana process and the SNA’s focus on fighting the Kurds at the behest of Turkey rather than the Syrian government as a deviation from revolutionary creeds, though they have kept quiet for the sake of retaining Turkey’s support.

The roots of Ahrar al-Sham’s row with the SNA can be traced to 2017, when the Eastern Sector — Ahrar al-Sham’s wing in al-Bab and Jarablus — united with the Sham Front in a move that had the blessing of the group’s leadership. When the SNA was established that year, the Sham Front became the largest component of its Third Legion, to which the Eastern Sector was also incorporated as a brigade. Earlier this year, the Eastern Sector raised a number of demands, addressed effectively to the Sham Front. It asked for the control of al-Bab and Jarablus, a payment of $300,000 to cover past expenses, the replacement of the Third Legion’s commander and a say at al-Hamran crossing in eastern Aleppo, a major source of financial revenues.

The tensions led to clashes near al-Bab on April 1. As a result, the Eastern Sector decided to quit the Third Legion and join Hayat Thaeroon for Liberation, a newly founded formation of Turkish-backed groups. The Third Legion demanded the group hand over its weapons and outposts first.

The dispute was taken to a reconciliation committee, which decided on May 25 after consultations with Turkey that the Eastern Sector should return all weapons and all but a few outposts. The group refused to comply, even as the MIT reportedly used its influence to prevent the Eastern Front from joining Hayat Thaeroon for Liberation. The accession, however, went through, followed by reports that the Eastern Front had returned to Ahrar al-Sham.

The creation of Hayat Thaeroon for Liberation was spearheaded by Mohammed Jassem, aka Abu Amsha, leader of the Sultan Suleyman Shah Division, who has been accused of numerous rights abuses in Afrin and has fallen out with the Sham Front. Thus, the Sham Front sees efforts to strengthen the new formation as moves to weaken its standing within the SNA.

It was against this backdrop that the Sham Front moved to seize the Eastern Sector’s outposts on June 18. Referring to the HTS involvement in the clashes, the Syrian opposition’s self-declared interim government accused HTS of seeking to “distract the revolution’s forces” by fomenting inhouse rifts and urged all SNA factions to stay on alert. The Syrian Islamic Council and some SNA commanders also took a stand in support of the Sham Front.

Opposition sources charge that Soufan and Golani are both trying to take advantage of the crisis — the former to strengthen his standing within Ahrar al-Sham and the latter to expand the HTS’ areas of control. Some speculate that Soufan is after revenge from the Sham Front after several groups affiliated with Ahrar al-Sham in Idlib defected to the Sham Front last year. Others claim HTS is seeking to completely finish off the Sham Front and Jaish al-Islam, which is also part of the Third Legion.

Either way, the never-ending bickering within the SNA is helping HTS to solidify its strength. And while there have been some efforts to unite the SNA and HTS, Golani would like to take advantage of such quests to expand his influence into the Euphrates Shield and Olive Branch enclaves held by Turkey and its allies.

Kurdish sources, meanwhile, debate claims that Turkey is happy with HTS control in Idlib and might be willing to hand Afrin over to the jihadi outfit. Proponents of Ankara’s Syria policy counter that HTS is trying to use Ahrar al-Sham as a Trojan horse to gain a foothold in Afrin, thus threatening Turkey’s plan for a safe zone. Turkish forces have rarely intervened in clashes between allied groups, as Turkey rather tries to appear as a mediator. Still, some believe that Turkey’s initial inaction in the latest clashes was meant as a signal to the troublesome SNA that HTS might be its alternative.