Turkey turns up pressure on allies in Syria

Turkey is using the jihadis’ march into Afrin to push its rebel allies in Syria to reorganize as a coherent, disciplined force. But what happens next if the factions fail to do so by the reported year-end deadline? 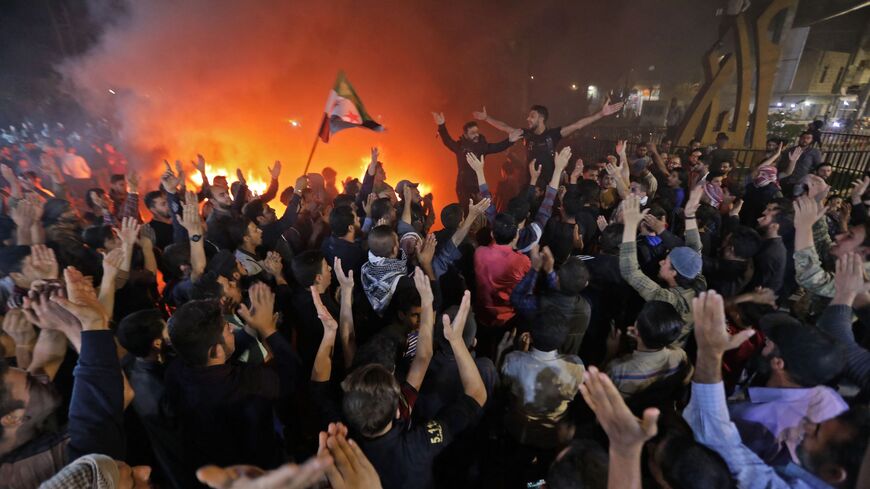 Demonstrators chant and burn tires as they gather in the Syrian opposition-held town of al-Bab, near the border with Turkey in northern Aleppo province on Oct. 16, 2022, as locals and others from the opposition-held cities of Azaz, Jarabulus, Mari and al-Bab demonstrate against Hayat Tahrir al-Sham after it gained control over Afrin from other Turkish-backed Syrian rebel groups. - BAKR ALKASEM/AFP via Getty Images

Turkey has launched a fresh effort to reorganize allied rebels in northern Syria and is reportedly using threats and ultimatums to discipline the disorderly factions that have backed Turkish forces in the Olive Branch and Euphrates Shield pockets in the Aleppo countryside.

Turkey is apparently using Hayat Tahrir al-Sham (HTS) — the jihadi outfit controlling the northwestern province of Idlib — as a stick in its efforts to push the factions to form a joint military command and a joint administrative structure.

Taking advantage of feuds between Turkey’s allies from the Syrian National Army (SNA), HTS last month marched into Afrin and ousted the SNA’s Third Legion, which is led by the Levant Front, and tried to advance to the border town of Azaz. In talks overseen by Turkey, HTS reached a deal with the Third Legion on Oct. 14, reportedly imposing terms on unifying military commands and civil administrations. Turkey reportedly gave HTS until Oct. 21 to retreat to Idlib. Some claim HTS continues to keep some of its forces in Afrin under camouflage.

Since the truce, Turkish intelligence and military officials have held talks with both HTS and the SNA. Their most recent meeting on Nov. 2 in the Turkish border province of Gaziantep was with the commanders of SNA factions, including the Hamza Division and the Suleyman Shah Division, which have sided with HTS, the Third Legion and others. Some rebel commanders reportedly refused to attend, and images were circulated of a group protesting the Turkish officials.

The meeting was rather short and saw Turkish officials raining orders on the SNA commanders, according to several media reports. The factions were told to unite under a joint command and shut separate operation rooms, cede all urban checkpoints to a joint security apparatus, hand over control of crossings — a source of lucrative revenues — to a financial committee and create a joint fund, and close down the prisons they operate. A warning was issued that fresh internal conflicts could result in dissolving the groups involved.

Furthermore, the commanders were told that all coordination and contacts with Turkey would be now taking place via a consultative committee representing the SNA’s three legions and the interim government proclaimed by the Turkish-backed opposition. The factions were prohibited from seeking separate communication channels with Turkish officials or foreign parties. Ankara is believed to have been irked by some groups’ contacts with the United States.

The factions were cautioned that they are not without alternatives if they fail to comply. Many saw this as a message that Turkey might let HTS assume military and administrative control in the Aleppo countryside.

The leaks from the meeting contain no information about a prospective role for HTS, detailing only demands for wayward factions to operate strictly under the umbrella of the three SNA legions. Based on this information, the scope of the new arrangements does not seem to extend to Idlib.

According to Turkey’s Aydinlik daily, the meeting lasted just 27 minutes and the Turkish officials said that HTS would be removed fully from Afrin, and the SNA factions that facilitated its march into the city — Ahrar al-Sham, the Hamza Division, the Suleyman Shah Division and Faylaq al-Sham — would be punished.

The pro-government daily Turkiye, meanwhile, said the meeting was a "milestone” in reorganizing the armed opposition in Syria and lasted four hours. The factions “are being redesigned from scratch,” it wrote. The Turkish officials made it clear that “the current state of affairs cannot go on” and “it is compulsory to transform groups centered around individuals and based locally into a regular army.”

Lebanon’s Al-Akhbar wrote that Ankara — under pressure from the expansion of HTS, a designated terrorist group — gave the SNA factions hope of restoring their map of control, but the meeting was “shocking” to SNA leaders not only because of its duration — 40 minutes at most, according to the paper — but also because they were not allowed to speak as a Turkish official “delivered orders.” How HTS would be removed from Afrin or who would oversee the steps to unify the factions remained unclear. Opposition sources told Al-Akhbar the factions were given till the year's end to complete the steps and denied any Turkish pledge to punish factions collaborating with HTS.

According to Syria’s government-aligned daily al-Watan, SNA leaders were deeply annoyed by the treatment they received, including the dressing down of one commander for allegedly accepting bribes to facilitate the HTS’ move into Afrin. The Turkish side reportedly threatened to probe, arrest and seize the properties of those who go against the instructions laid out at the meeting.

Al-Watan said that HTS and the Third Legion met on Oct. 30 in Idlib after the Oct. 14 deal, which, it claimed, was sponsored by Turkey’s National Intelligence Organization (MIT), and curbed the clout of the Levant Front. Turkey’s ultimate intention, it claimed, is to let HTS take over al-Bab, Jarablus and Azaz.

Before the meeting in Gaziantep, Turkish officials met with HTS representatives in Atmeh, a town near the Turkish border in Idlib. Since then, HTS leader Mohammed al-Golani has given no sign of backing down from his ambitions to expand his grip in the Aleppo countryside. The jihadi outfit is reportedly confident that SNA factions would fail to reorganize by the year's end and its own plans would remain unchallenged. The MIT has allegedly punished the Levant Front in a move that is likely to play into the HTS’ hands. Turkey’s anger with the Levant Front is traced back to the group’s refusal to contribute fighters to Turkey’s allies in Libya and Nagorno-Karabakh. The Hamza Division and the Suleyman Shah Division, which have collaborated with HTS, are among the factions in closest contact with Turkish intelligence.

All those meetings speak of Turkey’s disappointment with the unending chaos in SNA ranks since the alliance was announced in 2019, as well as its hopes to discipline the factions by the way of HTS.