Hayat Tahrir al-Sham tried to enter the Turkey-backed factions’ stronghold to support Ahrar al-Sham that refused to support the newly formed leadership by some groups within the movement. 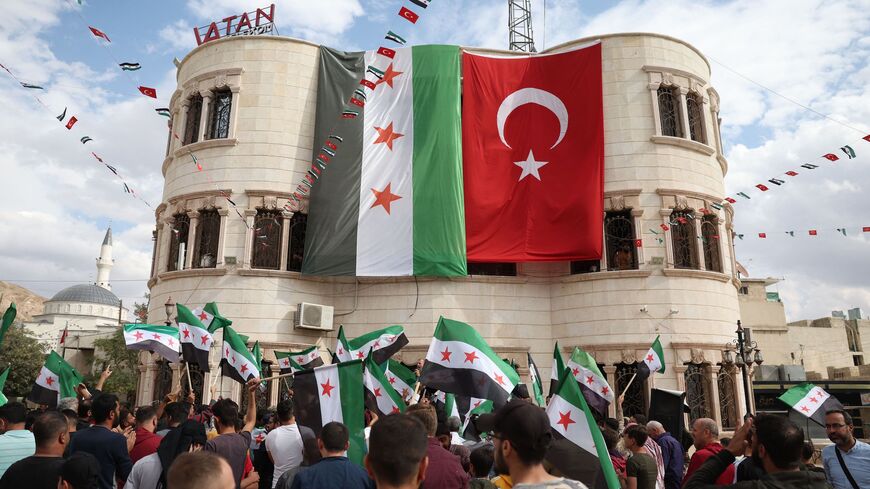 Syrian demonstrators gather to protest Hayat Tahrir al-Sham (HTS) jihadist group in the border town of Azaz in the rebel-held north of the Aleppo province on Oct. 21, 2022. - OMAR HAJ KADOUR/AFP via Getty Images

Sources in the Turkish-backed Syrian National Army (SNA) told Al-Monitor that Hayat Tahrir al-Sham (HTS) launched an attack at dawn on Nov. 11 on a base affiliated with the Ahrar al-Sham movement in the northern Aleppo countryside, which prompted the Turkish army to intervene and counter HTS’ attempt.

Independent media activists who declined to be named told Al-Monitor that an HTS military convoy surrounded Ahrar al-Sham’s Teranda base in the countryside of Afrin, in the north of Aleppo, with the aim of pressuring the movement’s new leader, who is positioned inside the base, to hand over leadership to the pro-HTS Ahrar al-Sham leadership.

According to the activists, the Turkish army prevented HTS’ military convoy from entering the area through the Ghazawiya crossing, forcing the convoy to turn around and enter through a dirt road. Later, the HTS convoy withdrew upon the Turkish army’s demands.

Several military groups within Ahrar al-Sham dismissed Nov. 8 their leader, Amer al-Sheikh, who is loyal to HTS and replaced him with Youssef al-Hamawi, nicknamed Abu Suleiman.

Omar Salem, an SNA leader based in the Aleppo countryside, told Al-Monitor, “HTS is seeking to eliminate the Turkish-backed Third Legion, which is standing in the way of its ambitions (to expand in northeast Syria). But its attempts have so far failed, as the Turkish side has prevented HTS from entering the area under the SNA control.”

He added, “The Turks have assured us their refusal to allow HTS to enter our areas and stressed that the Turkish army is ready to use force to prevent this. Meanwhile, (HTS leader) Abu Mohammed al-Golani is shocked about the appointment of a rival leadership within Ahrar al-Sham led by Youssef al-Hammawi and the dismissal of Amer al-Sheikh, who is close to him (Golani).”

For his part, Ahmed Hassan, a Turkey-based journalist focusing on Turkish affairs, told Al-Monitor, “The Turkish position is clear and aims to preserve stability in the area to prevent a displacement wave toward Turkish territories. Turkey does not intervene in the infighting among its affiliated factions. Its forces are present in both Idlib and the areas under the factions’ control, and thus it is not in Turkey’s interest to antagonize neither HTS nor the factions. Instead, it seeks to prevent clashes between them and improve the administrative and security situation in the area. This is why it supports the transition toward institutional work. This mechanism had failed in the past, but [Turkey] could once again attempt to relaunch this transition by pressuring the factions’ leaders. This is what is currently happening.”

Hassan pointed out that there is no dispute between Turkey and the SNA’s Third Legion, and that Turkey is working toward the institutionalization of the factions.

He added, “HTS is still testing the Turkish position regarding its entry into the SNA-held areas. This explains why HTS is carrying out several scenarios (operations), including entering the area by force or imposing its administrative and security presence through an understanding with Turkey and its affiliated factions. HTS is even trying to have an undeclared presence though the SNA factions that are close to it (in reference to Ahrar al-Sham). But any rush move or miscalculation could cost HTS, which has become aware that Turkey will not allow it to penetrate the area.”