Infighting in Turkish-backed faction leads to tension in Syria's Afrin

It seems Hayat Tahrir al-Sham lost a loyal faction after several currents with the Turkish-backed Ahrar al-Sham factions isolated the movement’s current leadership and appointed their own leader. 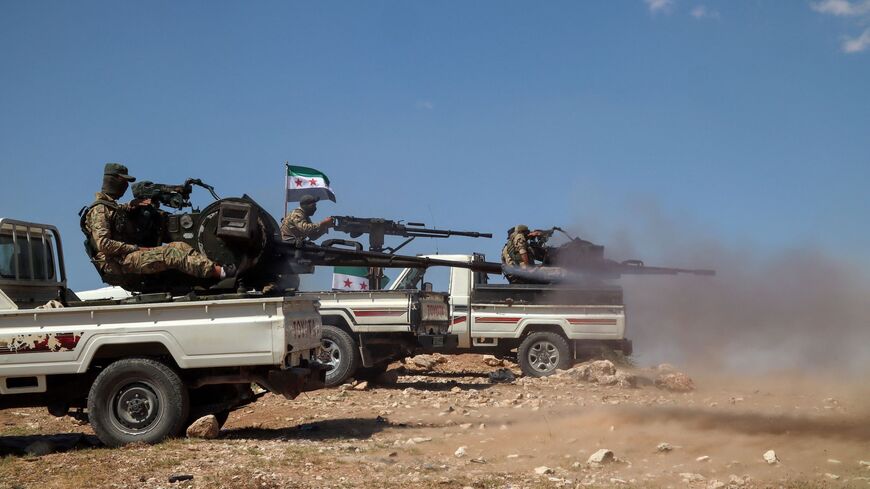 Fighters from the Third Legion of the Turkish-backed Free Syrian Army (TFSA) take part in a military training exercise near the border town of Azaz in the rebel-held north of the Aleppo province on Sept. 15, 2022. - AFP via Getty Images

ALEPPO — Tension has grown in recent days between rival currents within Ahrar al-Sham, which is affiliated with the Turkish-backed Free Syrian Army (FSA), over Hayat Tahrir al-Sham (HTS), leading to clashes between fighters supporting HTS and others opposing it in the vicinity of Afrin in the countryside of Aleppo.

Ahmed Ibrahim, a journalist based in Afrin, told Al-Monitor that “clashes have been ongoing since Nov. 10 in the area surrounding the Teranda base [of Ahrar al-Sham] in the west of Afrin between groups affiliated with the Ahrar al-Sham leadership close to HTS and fighters from the faction holed up in the base, after the latter appointed their own leader while isolating Ahrar al-Sham’s leadership.”

Ibrahim added, “Afrin witnessed on Nov. 11 popular protests against HTS’ presence in the city, calling on its fighters to withdraw from the area. HTS is accused of fueling the internal dispute within Ahrar al-Sham while providing military support to some Ahrar al-Sham groups against those it labels as coup stagers.”

He added that “isolating the movement's leadership loyal to HTS was a severe blow to Abu Mohammed al-Golani, who was in control of the movement and was using it for expansionist ambitions.”

The latest tension within Ahrar al-Sham emerged after five large military groups in the movement announced the dismissal of their leader, Amer al-Sheikh, who is close to HTS, and the appointment of Youssef al-Hamawi to replace him. The five groups are al-Iman, al-Khattab, al-Sham, al-Hamza and al-Adiyat brigades.

In a joint statement issued on Nov. 8, the groups said that the dismissal decision resulted from “the previous leadership’s violation of the tenets and righteous Sharia approach of the movement, for which thousands of martyrs were sacrificed.”

The statement explained that the previous leadership “shifted from targeting the [Syrian] regime and the occupying forces to [targeting] the revolutionary factions for ends and aims that are not based on the Islamic Sharia.”

The statement also announced the appointment of Youssef al-Hamwi, nicknamed Abu Suleiman, as the general commander of the movement, as well as the dismissal of its leader, Amer al-Sheikh, along with the leadership council.

The new leadership appeared to have new official pages on social media under the name “Islamic Ahrar al-Sham Movement.”

The official spokesman for the new leadership of Ahrar al-Sham, Mohammed Zaid, who resides in the countryside of Aleppo, told Al-Monitor, “What happened was not a coup but rather a step aimed at rectifying a path and removing a stumbling block from the path of the revolution.”

Zaid added, “The isolation of the previous leadership resulted from several factors, not only limited to its closeness to HTS. These factors also include mistakes committed ever since the current leadership took over. Such mistakes have become so numerous that it has become necessary for us to stand up to the leadership and isolate it.”

He continued, “The new leadership enjoys the support of the largest part of Ahrar al-Sham’s groups, most of whom are stationed in Idlib, while others are spread in the north of Aleppo and account for 80% of the movement — meaning that only 20% remain with the isolated leadership. A large part of these want to leave the isolated leadership but are afraid of HTS.”