Once considered by some Western observers as a formidable opposition movement, Ahrar al-Sham is experiencing major defections and facing survival challenges. 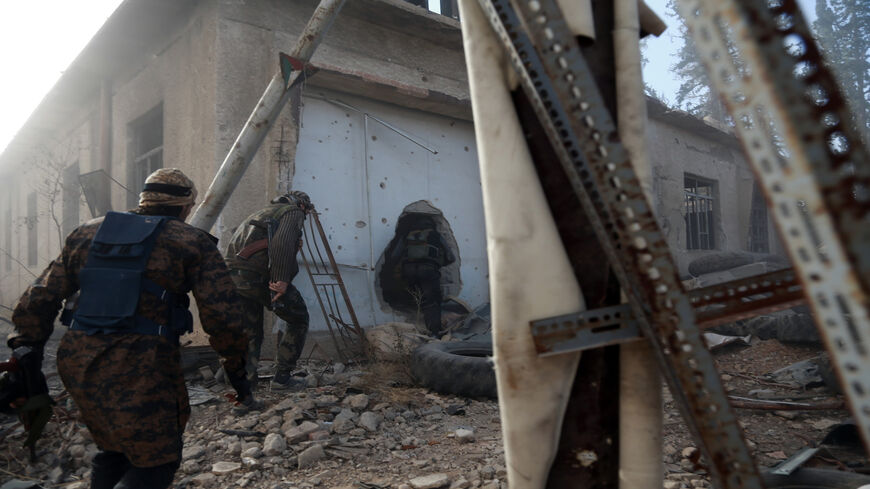 Rebel fighters from the Ahrar al-Sham brigade inspect the interior of a damaged building in the rebel-held besieged town of Harasta, in the eastern Ghouta region on the outskirts of Damascus, Syria, Nov. 16, 2017. - Abdulmonam Eassa/AFP via Getty Images

IDLIB, Syria — The owner of the well-known @MzmjerSh Twitter account of a jihadist from Syria revealed in a thread June 22 that Ahrar al-Sham is experiencing major defections within its ranks.

@MzmjerSh focuses on jihadist affairs and the man behind it is believed to be a former jihadist leader in Jabhat al-Nusra.

“The Ahrar al-Sham movement is currently witnessing a major turning point, since about 1,000 fighters, who form the backbone of the commando forces and the special forces, have defected. The division came as a result of disputes with the movement's leadership over some internal reforms that these fighters had demanded,” @MzmjerSh said.

He added, “Ahrar al-Sham leader Amer al-Sheikh tried to downplay the importance of these defections by saying that no more than 300 fighters may defect, wishing them luck should they choose to do so. Sheikh seems unaware that such a division will deal a severe blow to the movement and will be followed by more defections, leading to the movement completely collapsing.”

He said there are expectations that this large number of defected fighters will join the Sham Front since they are closest to it.

@MzmjerSh pointed out that a leader in the Sham Front, one of the formations of the Turkish-backed Free Syrian Army (FSA), had informed him that the Sham Front might not be very enthusiastic about the idea of including such a large number of defected fighters from Ahrar al-Sham, for several considerations, most importantly, the increased financial burden. He noted that this move was also opposed by Turkey.

Meanwhile, well-informed sources within Ahrar al-Sham told Al-Monitor that the defections within it are ongoing, but they are not at the level of battalions and brigades — they are only individual defections that have few consequences.

A group of fighters from Ahrar al-Sham had previously joined the ranks of the Sham Front under the leadership of Chief of General Staff Abu al-Laith al-Homsi.

About 400 fighters belonging to what is known as the Homs Bloc of Ahrar al-Sham had defected earlier this year and joined the FSA’s Sham Front, following a number of appointments made by Sheikh. The Homs Bloc represented a third of Ahrar al-Sham’s fighting forces under the leadership of Abu Faisal al-Ansari, and was considered as an elite fighting force in the movement.

In this context, one of the leaders who recently defected from Ahrar al-Sham nicknamed Abu Amer al-Homsi, residing in Idlib, told Al-Monitor, “We left Ahrar al-Sham because of all the rivalries at the leadership level. We had no more laws to follow and the movement turned into groups bickering over positions and interests, which made it lose its strength. Some members are loyal to Hayat Tahrir al-Sham [HTS], others support the FSA — so leaving Ahrar al-Sham and joining [other] factions was a given. Not to mention that the movement also failed to pay the salaries of several members.”

Another Ahrar al-Sham leader told Al-Monitor on condition of anonymity, “Rumors about the movement falling apart are unfounded. Ahrar al-Sham still has a major presence and it is fighting the Syrian regime forces in Idlib and the Kurdish parties in the northern countryside of Aleppo and northern Raqqa. There are no major defections happening — all factions lose members to other Syrian opposition factions on a regular basis. Ahrar al-Sham will not dissolve itself nor will it join HTS or the Sham Front.”

Majd Kilany, an Idlib-based researcher at the Jusoor Center for Studies, told Al-Monitor, “The Ahrar al-Sham movement has been experiencing some difficulties since Sheikh took over and made some decisions without referring to major figures within the movement. This happened after Ansari defected and joined the Sham Front with fighters from Ahrar al-Sham’s special forces, so the movement faced some difficulties at the administrative and financial level.”

He added, “The remaining members are now torn between staying or joining other factions that are more stable financially and logistically. Some prominent figures such as Abu al-Ezz Ariha, the former deputy commander of the movement; Abu Bakr Farouk who is in charge of the commando forces; and Hassan al-Hamdo, a soldier with the commando forces, are seeking to find better opportunities to survive in light of the difficulties and challenges facing the movement, especially after Amr took over and was accused of getting close to [HTS commander in chief Abu Mohammed] al-Golani.”

Kilany stressed that the destination of most of the defectors from Ahrar al-Sham will be toward the Sham Front, which seeks to expand its influence in the areas controlled by the pro-Turkish factions. It is the largest faction with a high financial ability to absorb more fighters.

Kilany pointed out that Ahrar al-Sham is going through a rough patch and could end up being dissolved unless the movement's leaders put their personal interests aside and allow for public interest to prevail.