Ahrar al-Sham, which was once one of the largest factions of the Syrian armed opposition in Idlib, has formed a new leadership council that is being perceived as a coup against the movement’s political leaders, who fear the group's integration into Hayat Tahrir al-Sham. 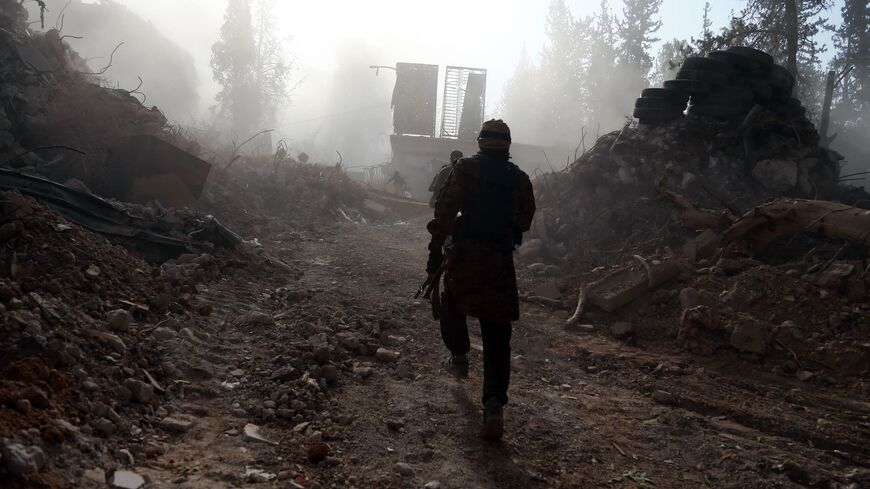 A rebel fighter from the Ahrar al-Sham brigade walks past the debris of damaged buildings in the rebel-held besieged town of Harasta, in the eastern Ghouta region on the outskirts of Damascus, on Nov. 16, 2017. - ABDULMONAM EASSA/AFP via Getty Images

Intensive meetings were held to resolve the dispute, but Soufan and Abu al-Mundhir insisted the Shura Council (which represents the movement’s political wing) and the leadership be dissolved. In January the two parties to the conflict agreed on appointing Sheikh to succeed Ali Pasha.

However, it seems the agreement has not satisfied the movement’s military wing, and Sheikh pushed to form the new leadership council.

But members of Ahrar al-Sham’s Shura Council, which still operates as the movement’s political wing, have criticized the formation of the new leadership council, which is supposed to be in charge of military decisions. But the movement’s political leaders have accused the new council of seeking to also control the political decision-making process by  undermining the role of the Shura Council.

A source close to Ahrar al-Sham told Al-Monitor that the new council is tantamount to a coup within the movement against the former leadership that was led by Ali Pasha and the Shura Council. The source explained that this new council is considered the executive body of the movement. He believes the formation of the new council, most of whose leaders are from the military brigades, is a coup against the political leaders represented by the Shura Council.

Abu Mohammed al-Shami, a member of the new leadership council, told Al-Monitor that Sheikh formed it with the powers legitimately granted to him and that there is no coup.

“There is no doubt that Ahrar al-Sham’s role has been limited during the past years, but despite the obstacles, the movement is still carrying out its revolutionary duty as much as it can, and in particular, on the lines of defense against the Syrian regime forces,” Shami added.

Abbas Sharifeh, a researcher at the Jusoor Center for Studies in Turkey, told Al-Monitor, “The new leadership council is considered … the highest authority. It is responsible for holding the movement’s commander accountable, removing him, appointing others or extending the commander’s one-year term according to the movement’s bylaws. The council is also in charge of peace and war decisions as well as financial and media policies.”

He added, “The commander’s task is to implement these policies, which is the same task of the Shura Council. Forming the new leadership council was one of the outcomes of the reconciliation agreement that was concluded between the two quarreling wings of the movement in January. The Soufan wing sought to define the role of the Shura Council, which was limiting the commander’s powers and disrupting many of the movement’s decisions. [Soufan and his wing believed] it was necessary to have an executive leadership council, and this is what happened.”

He went on, “These changes indicate that Soufan — who is known to be close to Hayat Tahrir al-Sham — may be behind them after the movement’s commander [Sheikh] fell under his influence and he became a mere front, especially since most of the new council members are more loyal to Soufan than they are to Sheikh. So these members could eventually carry out a coup against Sheikh and appoint Soufan as commander. These changes will push the movement closer to HTS and it might coordinate with it.”

Firas Faham, a Syrian journalist residing in Turkey, told Al-Monitor, “The goals of the new leadership council are to manage the military brigades and plan military operations. The formation of the council cannot be described as another coup, but rather the entrenching of Soufan’s influence. It seems that gradually turning Ahrar al-Sham from a more general movement into a military faction is a prelude to its integration into a possible future military council that includes all the factions of Idlib province.”

Faham added, “The Ahrar al-Sham movement that was organizationally independent and possessed resources that allowed it to maneuver lost much of that power in 2017. The recent changes that took place during the past months have turned the movement into a faction that is more harmonious with HTS, without any margin for independent action since Soufan wants to stay on HTS’ good side and avoid clashing with it.”